969
(Invited) Use of Supercritical Solvents for Electrodeposition of Thermoelectric Materials

Thermoelectric materials (TEMs) are of interest for both cooling (Peltier effect) and voltage generation applications (Seebeck effect). Thermoelectric generators (TEGs) convert heat energy into electrical voltage via the Seebeck effect. In a typical TEG the thermoelectric elements, usually alternating p-type and n-type semiconductors, are arranged electrically in series and thermally in parallel. The power that can be generated depends on many factors: geometrical design of the module, thermal coupling to the heat exchangers, thermal and electrical conductivity of the materials supporting and separating the TEM elements and fundamentally the thermal and electrical conductivity of the TEM itself. The latter is summed up by the materials dimensionless “figure of merit”:

The current consensus is that, to be truly competitive for power generation, TEMs should have zT of 2-3[1]; although there are plenty of cases where this is less important. For instance where waste heat can be used on a large scale for power generation; here the conversion efficiency and the cost of the TEM is far more important. For certain niche applications requiring low to moderate power and low maintenance (e.g. for remote, standalone power supplies) cost is less important and there are a range of exotic materials with zT on the order of 1. One such material that has been widely studied is bismuth Telluride (Bi2Te3) which has a figure of merit typically between 0.7 and 0.8. This can be doped (often with antimony to produce p-type or selenium to produce n-type) to give zT >1.4[2, 3]. Modifying the carrier concentration to improve electrical conductivity (σ) is one way of improving zT but as can be seen from the equation above the figure of merit is also inversely proportional to the thermal conductivity (κ). Unfortunately σ and κ tend to vary likewise and good electrical conductivity usually goes hand in hand with good thermal conductivity. One strategy for reducing the thermal conductivity of a TEM, with minimal impact on the electrical conductivity, is nanostructuring[4, 5]. In in bidimensional or monodimensional structures (i.e. very thin films or nanowires) as the critical dimension is reduced it approaches the same scale as the mean free path of the phonons and their propagation is limited by surface scattering. Thus by tuning the size of the TE elements along with surface roughness and grain boundaries it should be possible to optimise both the thermal and electrical conductivities and produce superior TEGs.

Previously we have demonstrated that, through judicious choice of electrolyte and design of precursor complex, supercritical solvents such as CO2 and difluoromethane (R32) may be used to electroplate a range of metal and semiconductor elements[6]. Furthermore supercritical fluid electrodeposition (SCFED) has distinct advantages over electroplating from conventional solvents: the broad potential window offered by R32 and CO2 allowing for electrodeposition of elements such as germanium; an ability to operate at high temperatures (since the reaction cells are all sealed); tunability of solvent properties (such as density and viscosity) and the absence of surface tension and very high rates of diffusion. The latter is a particular advantage when trying to electrodeposit into high aspect ratio nanopores and we have shown that filling of pores of 2-3 nm is viable by SCFED[7]. Here we demonstrate electrodeposition from binary solutions in supercritical R32 to produce bismuth telluride and antimony telluride films and nanowires of 13-55 nm diameter. We also demonstrate deposition of bismuth-tellurium and antimony-tellurium heterojunction nanowires. It is thought that Bi2Te3nanowires with a diameter <30 nm would offer a significant improvement in thermoelectric figure of merit[8, 9]. 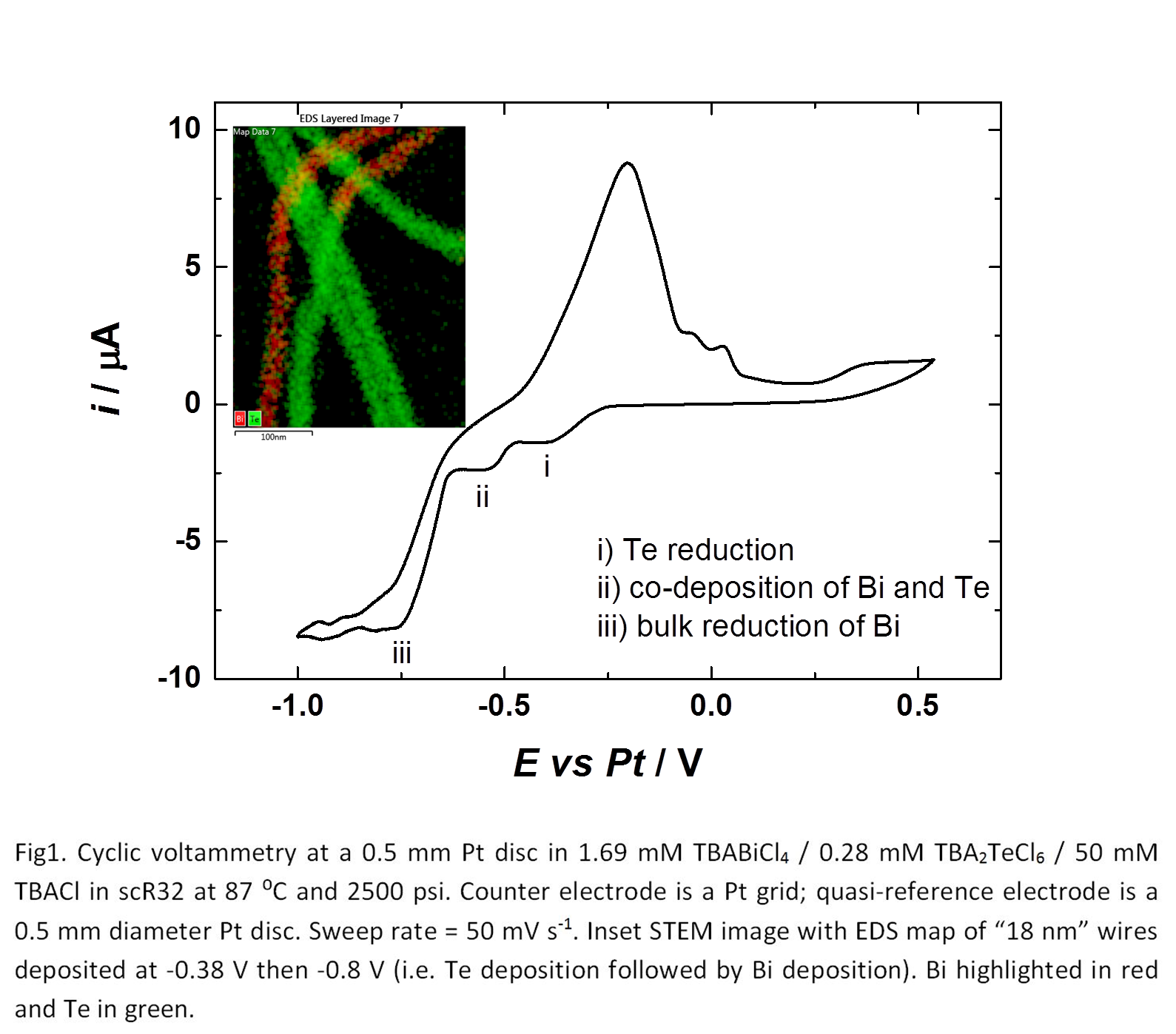