Chesapeake G (Gaylord National Resort and Convention Center)
T. Tsuda, G. Matsui (Graduate School of Engineering, Osaka University), N. Oda, A. Imanishi (Graduate School of Engineering Science, Osaka University), and S. Kuwabata (AIST, Osaka University)
Currently ionic liquid (IL) is a common technical term. A great number of scientists and engineers in various fields are using it to create new technologies because of IL’s interesting features, e.g., relatively high ionic conductivity, high electrochemical stability, low-flammability, negligible vapor pressure, and antistatic property.1 Although the chloroaluminate IL system consisting of organic halide and aluminum halide seems to be outdated one, only this IL system gives a high quality Al electroplating.2 To date, many chloroaluminate ILs have been reported for obtaining pure Al and Al alloy electroplating with a high coulomb efficiency. Usually Lewis acidic AlCl3–1-ethyl-3-methylimidazolium chloride ([C2mim]Cl) IL containing more than 50 mol% AlCl3 is employed. However, there is no report on Al-Nb alloy electroplating in the chloroaluminate IL while in inorganic AlCl3–NaCl molten salt it can be obtained.3 In this study, we examined to clarify the electrochemical behavior of Nb(V) in the Lewis acidic AlCl3–[C2mim]Cl IL. Based on the results, Al-Nb alloy electroplating was carried out under various experimental conditions.

The procedures used for the preparation and purification of the AlCl3−[C2mim]Cl IL were identical to those described in previous articles.2 All the electrochemical experiments were conducted using a three-electrode cell. A Teflon® sheathed platinum rotating disk electrode was employed for the working electrode. A coil of 1.00 mm diameter aluminum wire was used for the counter electrode. The reference electrode was an aluminum wire immersed in a neat 66.7-33.3 mol % AlCl3–[C2mim]Cl. These two electrodes were separated from the bulk IL by porosity E glass frits. All experiments were carried out in an Ar gas-filled glove box with O2 and H2O < 1 ppm. The Nb ion was electrochemically supplied by anodic dissolution of pure Nb metal to the chloroaluminate IL. Alloy samples were electroplated from the 66.7-33.3 m/o AlCl3−[C2mim]Cl with different Nb(V) concentrations onto Teflon®-sheathed 2.0 mm diameter copper cylinder electrodes.

Figure 1 shows cyclic voltammograms recorded at a Pt stationary disk electrode in the 66.7 mol % AlCl3–[C2mim]Cl with and without 19.6 mmol L-1 Nb(V). In the neat melt, Al deposition/stripping waves appeared at 0 V vs. Al(III)/Al by the known electrode reactions.2 After addition of Nb(V) to the neat IL, in a negative sweep initiated from the rest potential, four reduction waves appeared except the reduction wave for Al electroplating. Electrochemical analytical techniques revealed that the first two reduction waves correspond to electrode reactions for Nb(V)/Nb(IV) and Nb(IV)/Nb(III), respectively. Diffusion coefficient for the Nb(V) estimated from Levich equation and Cottrell equation was ca. 1.9 × 10-6 cm2 s-1 at 353 K. However, it was difficult for us to conduct further investigation on the other two reduction waves due to probably the precipitation of NbCl3 derived from the subsequent chemical reaction of the Nb(IV)/Nb(III) electrode reaction onto the electrode. In fact, electrochemistry of vanadium, which is the homologous elements of niobium, also shows a similar behavior.4 In this case, the alloying mechanism is likely different from that obtained by direct reduction from the transition metal ions dissolved in the chloroaluminate ILs, but nevertheless Al alloy can be obtained the same.2 Therefore, the Al-Nb alloy was prepared on Cu substrates rotated at a fixed rate of 2,000 rpm in the 66.7 mol % AlCl3–[C2mim]Cl with 5 ~ 48 mmol L-1 Nb(V) by a dc galvanostatic method at 353 K. As shown in Figure 2, Nb content in the Al-Nb alloys decreased with increasing the applied current density in all Nb(V) concentrations and with decreasing the Nb(V) concentration in all applied current density. The highest Nb content reached 65 at% when the Nb(V) concentration in the solution was 48 mmol L-1 and the applied current density was -5 mA cm-2. XRD patterns for the resulting Al-Nb alloys revealed that the alloys have a solid solution phase with an fcc structure because those for Al slightly shifted to lower angle with increasing the Nb content. When the content is 9.3 at%, XRD patterns for Al completely disappeared. It suggests that Al-Nb alloy forms microcrystalline or amorphous phase. 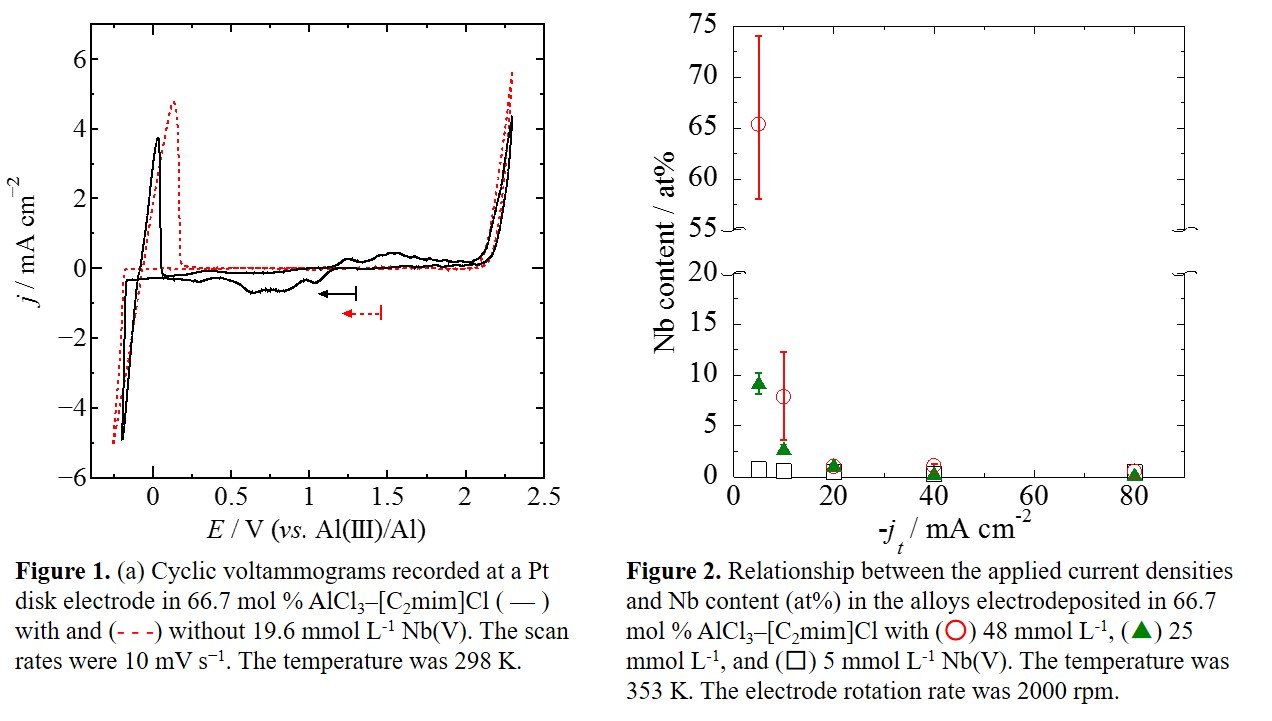