Prince George's Exhibit Hall D/E (Gaylord National Resort and Convention Center)
N. Harting, N. Wolff, F. Röder, and U. Krewer (Inst. of Energy & Process Systems Eng., TU Braunschweig, Battery LabFactory Braunschweig)
Lithium-ion batteries are the most promising candidate to fulfill a worldwide provision of electric mobility.
For a safe operation, it is essential to accurately know and determine the state of the Lithium-ion battery. The
most commonly used dynamic determination method is the Electrochemical Impedance Spectroscopy (EIS).
EIS analyses the battery in regard to linear system behaviour. However, electrochemical reactions show a
highly nonlinear relation of current and voltage according to Butler-Volmer Kinetics. Additionally, charge
and discharge processes of double-layers at surface interfaces and diffusion in spherical particles can show
nonlinear behaviour [1]. Therefore, information about the nonlinearities in the cell is not fully accessed with
EIS. To account for this, we provide a novel approach for characterization of Lithium-ion batteries, the so
called Nonlinear Frequency Response Analysis (NFRA). NFRA methods have priorly been used to fuel cells
to determine redox kinetics [2] and as a State-of-Charge Estimator for Lead-Acid batteries [3]. For NFRA,
high current amplitudes IAC are applied to a cell and the response signal is analysed. Thereby, higher
harmonic responses Yn with n≥2 are observed at multiples of the fundamental frequency f1.

In this study we show experimental research on Lithium-ion batteries to distinguish between ageing
characteristics at different environmental temperatures using dynamic analysis methods, e.g. EIS and NFRA.
We conducted ageing of identically constructed pouch cells with NMC as cathode and Graphite as anode
material at 25 °C and -10 °C with a 1 C constant current (CC)/constant voltage(CV) charging and 1 C CC
discharge profile. After every 50th cycle, dynamic measurements were performed at 25 °C in a temperature
chamber. EIS was measured with an excitation amplitude of C/15 and 1.5 C for NFRA, both at a frequency
range between 20 mHz and 5 kHz.

Whereas for EIS we analyse the linear output of the system Y1, for NFRA higher harmonics Yn as well as
their sum are investigated. In Figure 1, results of the ageing study are shown. The discrete frequency of
10 Hz is chosen, as it is a characteristic time constant of the electrochemical reactions, which we will
demonstrate by showing temperature dependent EIS studies. Voltage responses are exemplarly extracted
prior to ageing and each 200th cycle. By solely using EIS, it is not possible to distinguish between ageing at
25 °C and -10 °C, since the change of the linear output Y1 of the system is similar. For NFRA, voltage
response for Y2 behave qualitatively similar to Y1 for EIS. However, higher harmonic Y3 shows a strong
dependency of the ageing conditions, thereby enabling the possibility to distinguish between them. Further,
we will present process characterization on Lithium-ion batteries with NFRA by identifying characteristic
frequency ranges for higher harmonic voltage responses Yn and correlating them to typical electrochemical
and transport processes. Finally, we will show and discuss the impact of ageing on nonlinear and linear
responses of dynamic measurements for the overall frequency range. 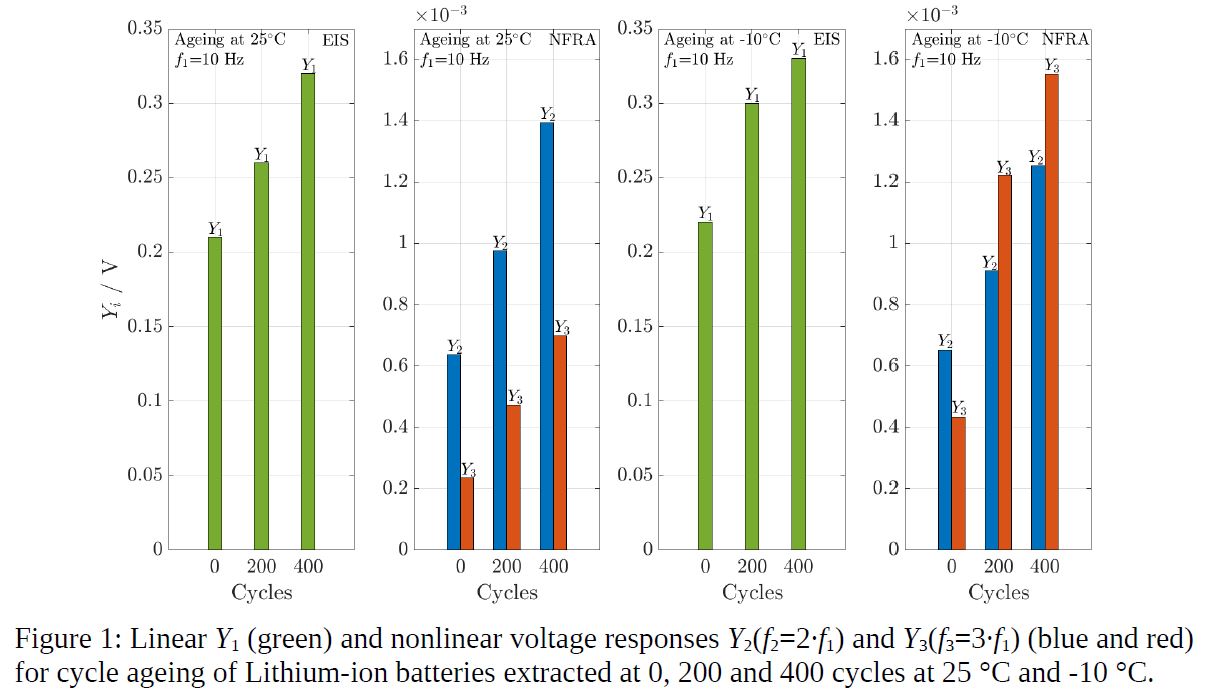