We will show the application of NFRA on Lithium-ion batteries with a model-based study for optimal identification and quantification of the individual processes. A state-of-the-art Single Particle Doyle-Newman model [5] is extended with a SEI and double layers at each interface and adapted to simulate NFRA of Lithium-ion batteries. In contrary to EIS, the system is excited with a high amplitude guaranteeing nonlinear behavior. The model output in the time domain is transferred via Fast-Fourier-Transformation (FFT) to the frequency domain, thereby accessing the amplitudes of the individual harmonics Yn as well as their sum in dependency of the frequency.

Once a system is excited with a sinusoidal input current, it will reach for a dynamic-steady-state. We will show how state variables, e.g. solid concentration and double-layer potentials, contribute to this behavior at characteristic frequencies defined for the NFRA spectrum in Figure 1. Thereby investigating the number of oscillations needed for dynamic-steady-state analysis. With decreasing frequency, ranging from 1131 Hz to 5.3 Hz to 0.3 Hz, the influence of the anode solid concentration csurf,a increases until it becomes dominant in the low frequency region at 0.3 Hz. Further, only the double-layer potentials Δϕa and ΔϕSEI at the anode side are influenced, indicating the anode as limiting electrode.

We further focus on the investigation of the dynamic-steady-state for process identification by parameter and amplitude variations. The impact of the variation of diffusion coefficient, reaction rates and double-layer capacitances is demonstrated. Changes in SEI processes influence the overall excited frequency range, whereas changes in reaction and diffusion processes affect only certain frequency regions. Thus, frequency ranges can be assigned to processes, therefore enabling process identification. Additionally, with a variation of processes, the amplitude dependency changes. Further, individual harmonics show different characteristic progressions within the overall frequency range. Process identification on Lithium-ion batteries in general can highly benefit from these findings.

Besides NFRA, we provide EIS spectra, simulated with small excitation amplitudes for linear excitation of the system, for comparison to NFRA simulation results. With NFRA, a powerful new dynamic analysis tool is created, accessing a new dimension to the electrochemical characterization of Lithium-ion batteries. 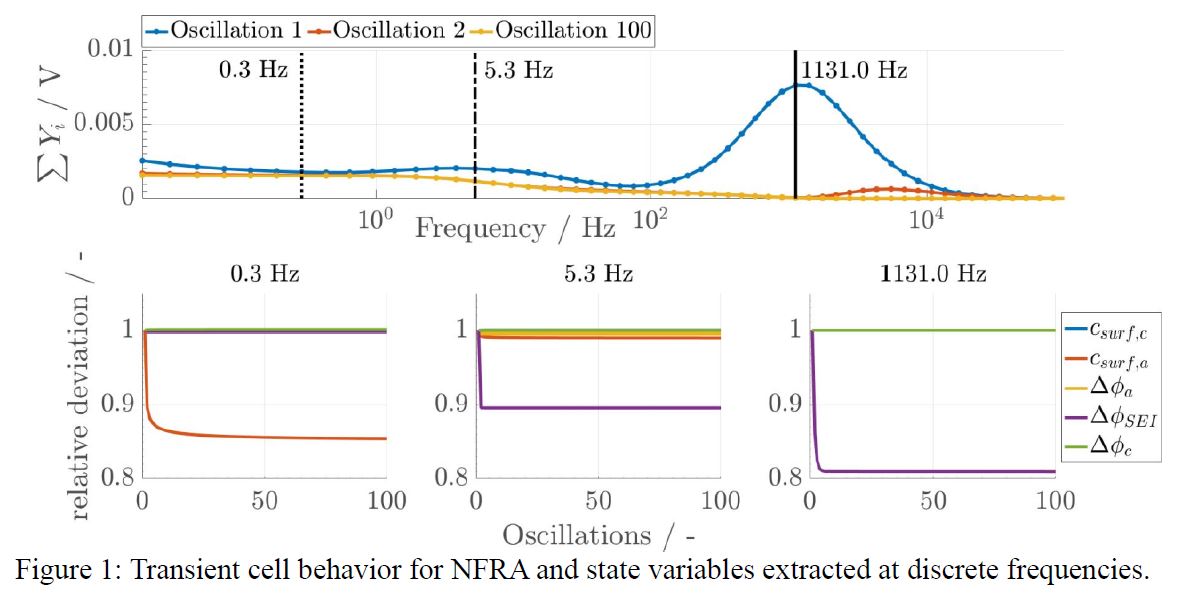