Chesapeake D (Gaylord National Resort and Convention Center)
D. R. Islamov (Novosibirsk State University, Rzhanov Institute of Semiconductor Physics SB RAS), V. A. Gritsenko (Rzhanov Institute of Semiconductor Physics SB RAS, Novosibirsk State University), and M. S. Lebedev (Nikolaev Institute of Inorganic Chemistry SB RAS)
Hafnia-based high-κ dielectrics are used in MOS devises as gate dielectrics [J.Robertson Rep.Prog.Phys.69,327(2006)]. The electronic properties of HfO2, including leakage currents, are defined by traps and defects [V.A.Gritsenko Phys.Rep.613,1(2016)]. Traps play different roles in different HfO2-based devices. When hafnia is used as a gate dielectric, traps increase its conductance. Electron or hole localization on traps shifts the threshold voltage and leads to the MOSFET degradation. In active layers of RRAM, traps act as precursors of the filament during the switch from a high-resistance state to a low-resistance state. In this case, the traps are used for device switching and information storing. The trap density in RRAM ranges as N~1019-1022cm-3. On the one hand, this is a huge defect concentration, which corresponds to the degeneration in semiconductors. On the other hand, such density is very low for modern analytical methods of analysis. Recently, it was reported that the charge transport in HfO2 is limited by the phonon-assisted tunneling between traps [D.R.Islamov Appl.Phys.Lett.105,222901(2014)]. The theory of phonon-assisted tunneling between traps allows defining the traps density from the slope of log J-V dependences. [K.A.Nasyrov J.Appl.Phys.109,097705(2011)]. In the study, we demonstrate the described approach and define the trap density in HfO2films after annealing in the inert atmosphere for two different ALD synthesis technologies.

The HfO2 films with the thickness of 40nm were deposited on Si(100) substrates in a hot-wall Picosun Sunale R-200 ALD reactor (Finland) at an evacuation to ~1mbar. Pure nitrogen was used as a carrier gas and for purging the reactor after each reagent pulse. The well-known TEMAH+H2O precursor system was used. TEMAH was delivered into the reactor from the heated source at 100°C. The substrate temperature was 250°C.

To compare the film quality of the TEMAH+H2O system, we studied a novel ALD precursor system Hf(thd)4+O2. Hf(thd)4 was delivered into the reactor from a heated source at 240°С. The substrate temperature was 440°C.

The samples were annealed in the N2 flow for 1 hour at different temperatures. Annealing was performed directly in the reaction chamber at Tann=440, 550 and 700°C for TEMAH+H2O samples and Tann=550, and 700°C for the samples deposited from the Hf(thd)4+O2 system. The samples were taken out from the reactor after cooling to room temperature. For transport measurements, top Al electrode with the area of 0.5mm2, was deposited. The current-voltage characteristics were measured at room temperature.

A set of the experimental current-voltage characteristics (log J-F) of n-Si/HfO2/Al structures from TEMAH+H2O series is shown by characters in Fig.1. The slope of log J-F curves depends on the temperature annealing. The experimental data are described by phonon-assisted tunneling between traps with the thermal (Wt=1.25eV) and optical (Wopt=2.5eV) trap energies (lines in Fig.1). These values are equal to that obtained from the literature [D.R.Islamov (2014)]. Annealing leads to a trap density decrease. After annealing at 700°C, the trap density value is N=1.2×1020cm-3.

A set of experimental log J-F of n-Si/HfO2/Al structures from Hf(thd)4+O2 series is shown by characters in Fig.2. These curves can be described by the phonon-assisted tunneling theory with the same values of trap parameters as that obtained for TEMAH+H2O series. The trap density rises with the annealing temperature increase to 1.2×1020cm-3.

The trap density dependences on the annealing temperature are shown in Fig.3. The HfO2 films from TEMAH+H2O series have more defects (and traps) than those from Hf(thd)4+O2series. After high-temperature annealing, the amount of the defects is the same for both series.

We explain the obtained traps density values by the presence of hydrogen in HfO2 precursor. The presence of OH-groups in such films was also confirmed by infrared spectroscopy, wherein the sharp reduction in their concentration during annealing in the nitrogen atmosphere at 700°C was recorded. Since the hydroxyl groups are a fixture of the H2O-based ALD process, then a certain amount of hydroxyl groups unreacted with TEMAH will be integrated into the film structure. High temperatures in an inert atmosphere can lead to the destruction of OH-groups. The scheme could look like (≡Hf–OH–Hf≡)+→≡Hf–O–Hf≡+H+, with the subsequent hydrogen removal from HfO2 bulk due to low pressure annealing. Thus, we assume that reverse process has been observed in comparison with [S.Kim Nanotechnology23,325702(2012)] where high-pressure H2-annealing was performed for oxygen vacancies generation and the great influence of mobile OH-groups on the film conductivity was noted.

The OH-groups are missing in the precursors of Hf(thd)4+O2 system, and their formation is unlikely during ALD. Therefore, annealing leads to the generation of a small number of additional oxygen vacancies in the HfO2film. 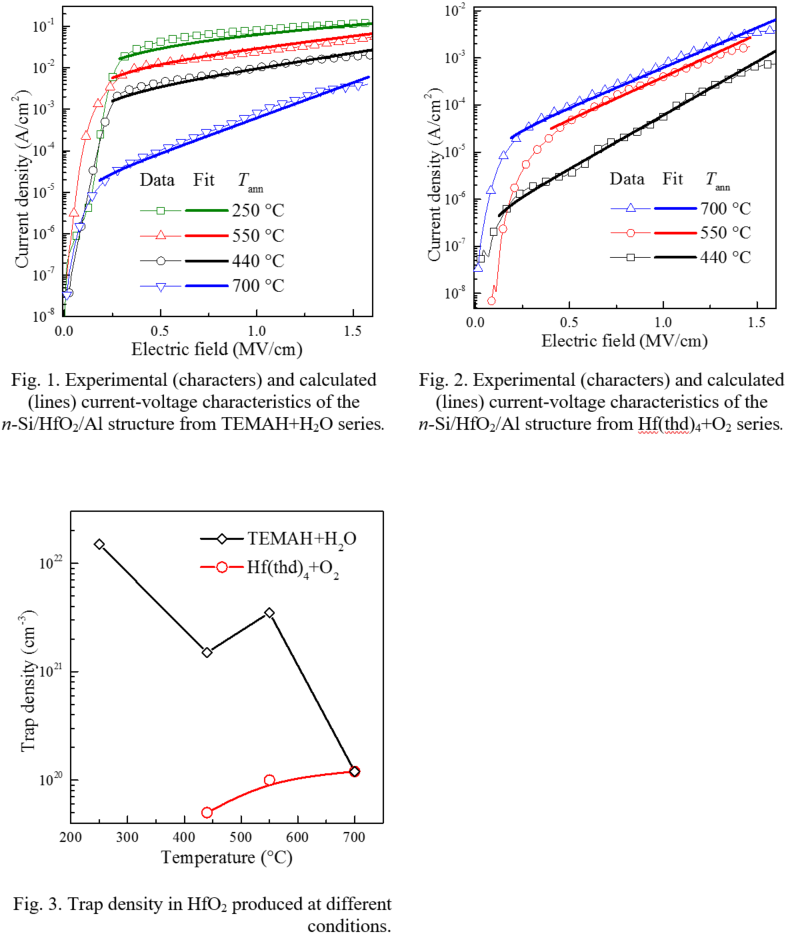