Prince George's Exhibit Hall D/E (Gaylord National Resort and Convention Center)
D. Liu, C. Kim, M. Cho, A. Guerfi (Research Institute of Hydro-Quebec (IREQ)), S. A. Delp, J. L. Allen, T. R. Jow (U.S. Army Research Laboratory), and K. Zaghib (Research Institute of Hydro-Quebec (IREQ))
There is a constant drive to improve the specific energy and energy density of the state-of-the-art lithium-ion battery. High energy can be achieved by either choosing a cathode material that operates at a higher potential or has a higher specific capacity. Compared with the conventional 4-V cathodes such as LiCoO2 (LCO), LiNixCoyAlzO2 (NCA), LiMn2O4 (LMO) and 3.5-V LiFePO4 (LFP), LiCoPO4 (LCP) operates at 4.8 V (vs. Li/Li+) with a theoretic capacity of 167 mAh g-1, resulting in a specific energy of ~800 Wh kg-1, which is about 25% higher than those of the conventional LFP and LMO lithium-ion batteries. Although Co is more expensive than the other transition metals, the energy cost of LCP is expected to be cheaper than all commercialized lithium-ion batteries on the market [1] due to the improved energy density (FIG.1).

However, LCP suffers from severe capacity fade due to the low intrinsic electronic/ionic conductivity, structure deterioration and electrolyte decomposition [2]. In order to improve the cyclability and reduce the cost of LCP, Co ions were partially substituted by cheaper elements such as Fe, Cr and Si etc [3]. Meanwhile, a carbon-coating was used to improve the electronic conductivity of LCP. Electrochemical tests showed that both carbon-coating and substitution greatly improved the cycling performance of LCP, which suggests that the substituted LCP is a very promising cathode candidate for high energy lithium-ion battery. 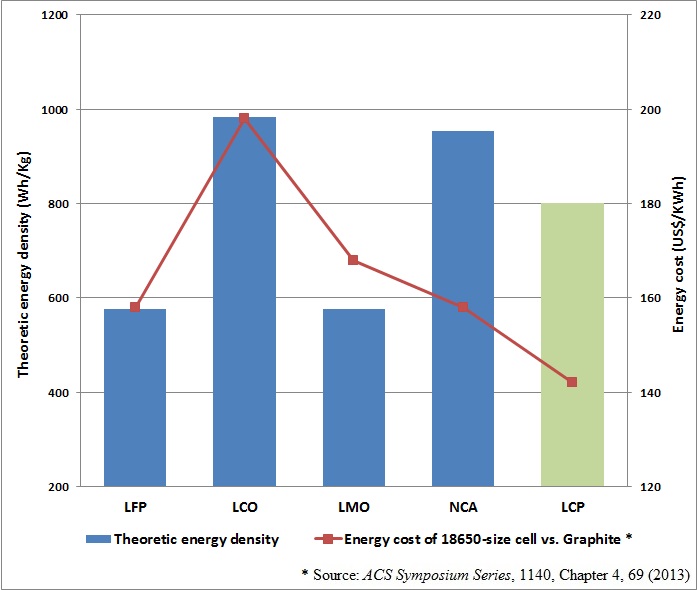