Maryland D (Gaylord National Resort and Convention Center)
K. Hayashi (KOBE STEEL, LTD.), Y. Wada, T. Suzuki, Y. Maeda (Toyohashi University of Technology), H. Sakamoto (KOBE STEEL, LTD.), W. K. Tan, G. Kawamura, H. Muto, and A. Matsuda (Toyohashi University of Technology)
As iron is a cost effective, safe, and abundant material, iron-based negative electrodes have been developed to realize rechargeable alkaline batteries for stationary and automotive applications [1-7]. One of the challenging issues to utilize its high potential is to prevent the formation of iron hydroxide passivation layer at the electrode surfaces, which terminates the successive electrochemical reaction and/or causes the electrical disconnection. One strategy to increase the specific capacity is to use nanometer-size iron particles as an anode active material [8,9]. However, loading of the adequate amount of iron is trade-off. Manohar et al. studied performance of the rechargeable iron electrodes fabricated by high-purity carbonyl iron powders and revealed that the additives like various metal sulfides had a significant impact to mitigate electrode passivation during discharge [2-4]. Quite recently, Yang et al. used “sintered-type” iron electrodes, instead of previous “pressed-plate” type electrodes, and demonstrated the operation over 3500 charge and discharge cycles at 1C rate and 100% depth of discharge. They attributed the excellent cycle capabilities to their interconnected structure. From viewpoint of practical application, fabrication of the battery components should be simplified and compatible with the mass production. In our previous study, we examined the sintered porous iron electrodes fabricated by atomized powders with a diameter of several tens micrometers to realize cost effective, high performance iron-electrodes and demonstrated the rechargeable iron-based batteries with a maximum charge capacity around 140 mAhg-1[10]. The atomization process also has an advantage on producing alloys powders simply by adding the additive elements during the fabrication. In this study, we studied the performance of the negative electrodes consisting of sulfur-containing atomized steel powders for rechargeable alkaline batteries.

The atomized steel powders with sulfur additives were used as a raw material. The diameter of the powders was on the order of several ten micrometers and the nominal content of sulfur additives was 0.33wt%. For comparison, the powders without sulfur additives (the content of sulfur < 0.015wt%) were also prepared. The powders were placed in the concavity of a stainless plate. The size of the plate was 100 ´ 100 ´ 3 mm3, while the volume of the concavity was 90 ´ 80 ´ 2 mm3. The nominal density of the porous region was 3 gcm-3. As a result, the weight of the active material was estimated to be about 42 g. Then, they were sintered at 1120 °C for 20 min. A solution of 8M KOH was used as an electrolyte. For evaluation of the electrodes without sulfur additives, 0.05% K2S was added to the electrolyte solution. The performance of the electrodes was evaluated by three electrodes cell. The iron-electrode was set as the working electrode and platinum ribbon acts as a counter electrode. Mercury oxide electrode serves as the reference electrode. Commercially available Ni positive electrodes were also used for evaluation. The charge current was 1 A (5 h), while the discharge current was 1 A with a cut-off voltage of 0.8 V. 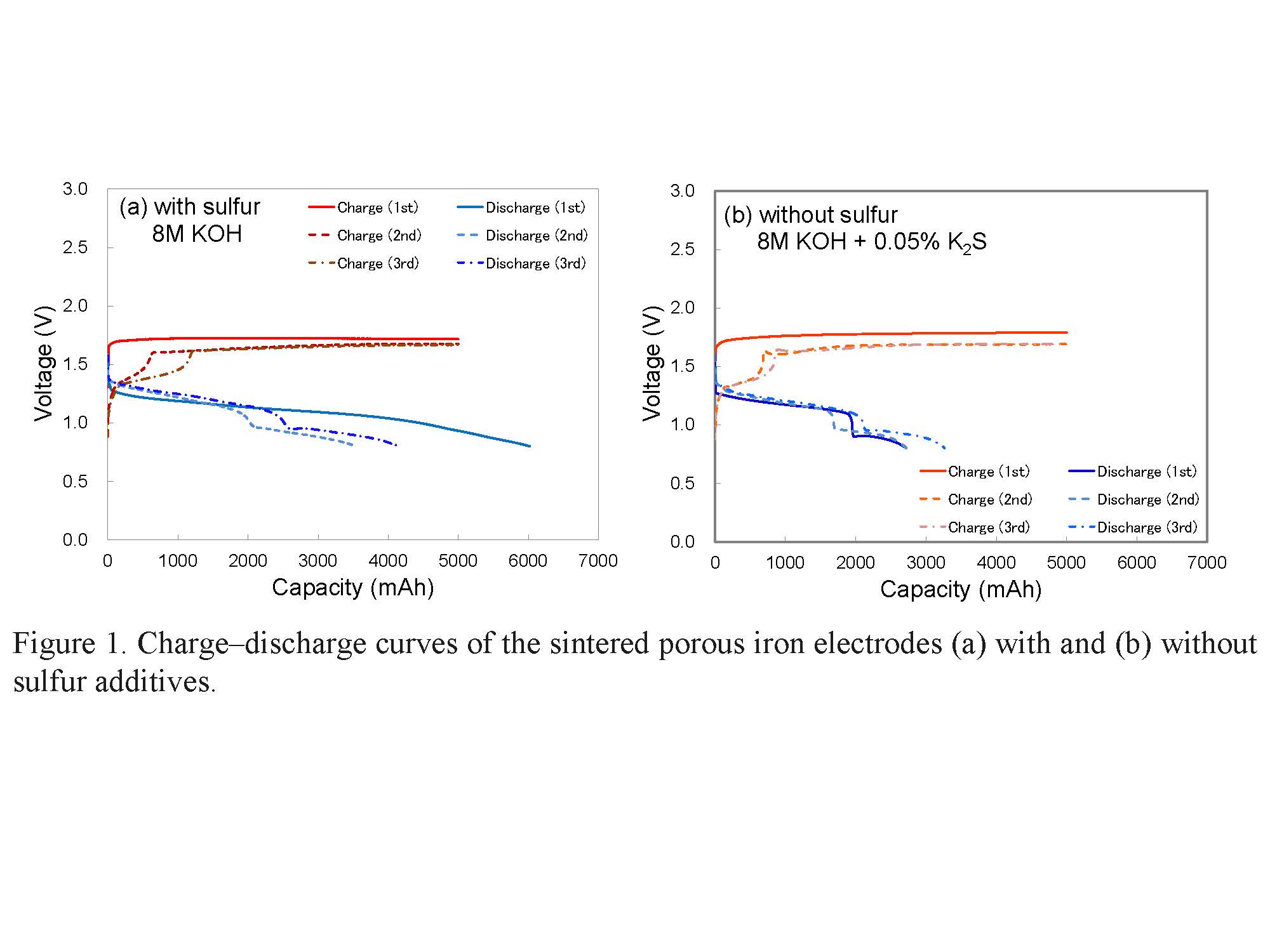