Lead zirconate titanate (PZT)-based piezoelectric ceramics have been widely used in actuators, sensors and other electric devices, owing to their outstanding electrical properties. However, their raw materials containing PbO cause serious harm to human health and environment, and thus it is an important issue to develop lead-free piezoelectric materials for the replacement of these lead-based ceramics.

(K, Na)NbO3-based ceramics is considered to be one of the most promising lead-free piezoelectric ceramics1), but problems such as volatilization of alkali metals, inferior sinterability and lower electrical properties than PZT are pointed out. In order to improve the piezoelectric properties of (K, Na)NbO3(KNN), some previous works prepared solid solutions of KNN-based lead-free piezoelectric ceramics with another perovskite oxide. In this study, we focused on a substitution effect of (Bi0.5Na0.5)TiO3(BNT) which induce tetragonal structure for (K0.45Na0.55)NbO3 (KNN), and synthesized (K, Na)NbO3-(Bi, Na)TiO3 by the solid-state reaction method using the spark plasma sintering. We compared ferroelectric properties with crystal and electronic structure obtained by the Rietveld analysis using synchrotron X-ray diffraction data.

Starting materials were wet-mixed in appropriate proportions, and then calcined at 900 ℃ in air for 3 h (KNN), and at 850 ℃ in air for 3 h (BNT), respectively. Thereafter, the samples were grounded by a ball mill and then sintered by the spark plasma sintering (SPS) method under an uniaxial pressing at 50 MPa at 1050 ℃ in vacuum for 5 min. For the obtained products, an annealing treatment was performed at 950 ℃ in O2 for 6 h. The identification of the phases and the evaluation of the lattice parameters were performed by XRD. Metal compositions of the ceramics were measured by ICP. Relative densities of the pellets were estimated by the Archimedes method. P-E hysteresis loop measurements were carried out at various frequencies using a TF-2000FE device (aixACCT) with the virtual ground mode. The surface and cross-section morphologies of the samples were observed by SEM. The temperature dependences of the dielectric permittivity (εs) and dielectric losses (tanδ) of the samples were measured by a LCR meter (HP-4284A). For average crystal structure analysis, we performed the Rietveld analysis (RIETAN-FP) using synchrotron X-ray diffraction patterns (BL19B2, SPring-8). The electron densities were determined by the maximum entropy method (MEM, Dysnomia program). For local crystal structure analysis, we measured X-ray absorption fine structure (XAFS) patterns (BL14B2, SPring-8) and then performed EXAFS fitting (Athena, Artemis) of a first coordination shell of Nb.

(1-x)(K0.45Na0.55)NbO3-x(Bi0.5Na0.5)TiO3 (x=0~0.07) could be identified as the perovskite structures with the tetragonal (P4mm) and/or the orthorhombic (Amm2) symmetries without impurity phases. It was found that all of the sample were sufficiently dense by the Archimedes method and the observation by SEM. From P-E hysteresis loop measurements, it was demonstrated that the remanent polarization Pr decreased by substitution of BNT. Relative dielectric constant and the Curie temperature (Tc) declined with the replacement of BNT. Therefore, it can be considered that BNT substitution has unfavorable influence on the ferroelectric property. In order to clarify an origin of such changes in the electrical properties, crystal structures and electron density distributions of the samples were analyzed. From the crystal structure analysis by the Rietveld method, it was found that the morphotropic phase boundary (MPB) existed around the composition of x=0.04 in the 1-x(K0.45Na0.55)NbO3-x(Bi0.5Na0.5)TiO3. We also calculated octahedral distortions of λ and σ2 from bond lengths and angles, respectively. These values tended to decrease due to BNT substitutions, and such a tendency corresponded to the change in the ferroelectric properties. From the electron density distribution obtained by MEM, it was considered that the electron density between (Nb, Ti) site and O1 site decreased due to BNT substitutions, leading to a decrease in the Curie temperature Tc. Analysis of the local crystal structure by EXAFS fitting indicated longer bond distance between Nb and O2 compared with KNN by BNT substitution which could not be seen from the average structure analysis. 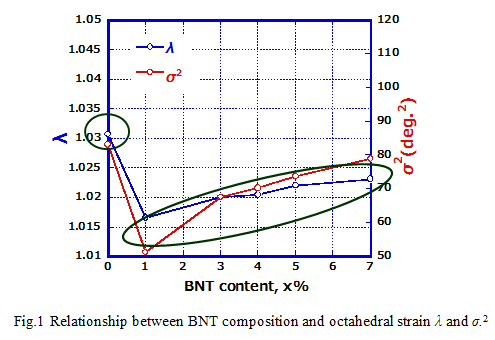