National Harbor 15 (Gaylord National Resort and Convention Center)
H. Ito (Ntl Inst of Adv Indus Sci & Tech (AIST)), N. Miyazaki, M. Ishida (University of Tsukuba), N. Kawaguchi, S. Someya, T. Munakata, and A. Nakano (Ntl. Inst. of Adv. Indus. Sci. & Tech. (AIST))
In the case of proton exchange membrane (PEM) electrolyzer, the material of bipolar plates has been practically limited to titanium (Ti). The material restriction for the bipolar plates should be relieved, when a membrane performing under alkaline (basic) conditions was applied to the electrolyte. In addition, alkaline conditions might enable to use less expensive catalysts. One of the alternative materials for electrolyte is an anion exchange membrane (AEM) that has high internal pH. The potential of AEM electrolysis has been presented by several previous studies [1-3]. However, it is difficult to say that the cell components have been sufficiently optimized, in terms of membrane, catalyst, electrode structure/configuration, and electrolytic solution. In this study, focusing on the electrode structure and configuration, various types of membrane electrode assembly (MEA) were fabricated in house, applying either configuration of catalyst coated membrane (CCM) or catalyst coated substrate (CCS), and then electrolytic cell with those MEAs were operated. Based on the experimental results of electrolysis, an appropriate electrode structure for AEM electrolyzer has been examined.

The current density (i) - cell voltage (V) characteristics were measured using various cell set-ups In the cell set-ups, a commercial AEM (A201, Tokuyama) was applied for the membrane electrolyte, and commercially available electrocatalyst was used for hydrogen (cathode) and oxygen (anode) evolution, namely, 4030 and 3030 (Acta SpA), respectively [3]. Cathode catalyst layers (CLs) were commonly prepared by catalyst coating membrane (CCM) method using commercial anion exchange ionomer (AS-4, Tokuyama) as a binder. As for anode, two different arrangements for CL configuration were adopted, namely, CCM and CCS. In the fabrication of CCS, polytetrafluoroethylene (PTFE) was used as a binder. In order to examine the stability of electrode structure, the series of i-V measurement was repeated in 2 days.

The observed i-V and i-R_cell characteristics using different cell set-ups are shown in Figure 1. In EL1 cell, the both electrodes were fabricated by CCM. As shown in Fig. 1 (a), the i-V performance of EL1 in 2nd day was definitely degraded from that in 1st day. In particular, the difference in V was relatively large even in small i range (<100 mA cm-2), though the difference in R_cell was negligible. It means that the degradation was mainly caused by the increase of activation overpotential related to catalyst performance. In the case of EL2 cell, CCS was applied for the anode CL, while the cathode CL was fabricated by the CCM method. As shown in Fig. 1 (b), the degradation in 2nd day was significantly decreased. It was clearly suggested that, for the anode, CLs fabricated by CCS must be much stable rather than that of CCM. 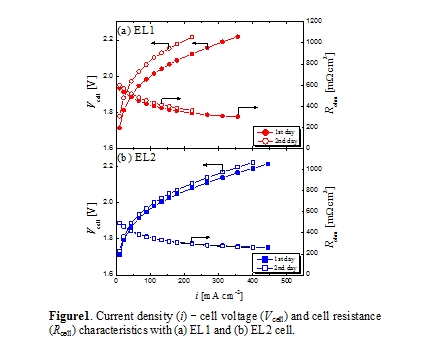