Sulfur, with the theoretical specific capacity of 1672mAhg-1 undergoing the rocking chair reaction (S8+16Li++16e-↔8Li2S), is the most promising cathode material candidates for future Li ion batteries excepting two main drawbacks hindered its application.1 On the one hand, during cycling, the Li deposited on Li foil is readily to form Li dendrite, resulting in the internal short-circuit of the battery.2 On the other hand, the dissolution of polysulfide species in electrolyte will lead to fast capacity fading. However, most papers reported are focused on the S cathode problems, less researchers paid attention to the drawbacks caused by the Li metal. In order to resolve the safety issue, a surface contact pre-lithiation method was used to introduce the Li ion in the S electrode.3 In this way, the Li metal can be replaced by other anode forming Li metal free full cell.

The sulfur/ Ketjen Black (S/KB) composite was mixed in a weight ratio of 1:1 after a heating process at 155 ℃. The S cathode was prepared by mixing S/KB composite:PVdF= 90:10 wt%. The KB can provide conductivity and physical confinement for the sulfur species, alleviating the dissolution of polysulfides. Moreover, the ionic liquid electrolyte, triglyme (G3) was used in the full cell which showed good polysulfide suppression ability.4 Because of the compatibility of the G3 electrolyte for the graphite anode, the graphite electrode (made in graphite:AB:PVdF=90:5:5 wt%) with an areal capacity of 0.9 mAh cm-2 (~300 mAhg-1) was used to pair with the pre-lithiated S/KB cathode (Li2S/KB). The graphite anode was pre-lithiated at the same condition to fabricate LixC anode. The graphite electrode with a solid electrolyte interphase layer (CSEI) anode was fabricated by disassembling the C-Li cell after 5 cycles. All the electrodes used were cut into 1 cm2size.

The cycling performance of the difference cells were tested at 0.1 C-rate (based on the weight of sulfur), showed in Fig. 1. Firstly, it is observed that the S-Li cell showed fast capacity fading using G3 electrolyte. It has been proved that the increased internal resistance give rise to the fast capacity decay in the S-Li half cell. In the initial cycle, the S-Li cell showed high specific capacity higher than 1600 mAhg-1 (0.8 mAh cm-2) due to the abundant Li ion source from Li metal. The S-Li cell turned to internal short in 80 cycle due to the formation of Li dendrite, indicating the safety issue of the Li metal containing sulfur battery.

Under this context, the surface contact pre-lithaition method was applied to graphite anode to introduce Li ion. The SEI layer was expected to be formed on the graphite surface at the same time. As a result, the S-LixC full cell showed increased capacity retention than the Li2S-C cell in Fig. 1.

In conclusion, it is convictive to say that the lithium metal free S-LixC cell showed high irreversible capacity and better safety. We believe that this work will make contribution to future sulfur lithium ion secondary battery. 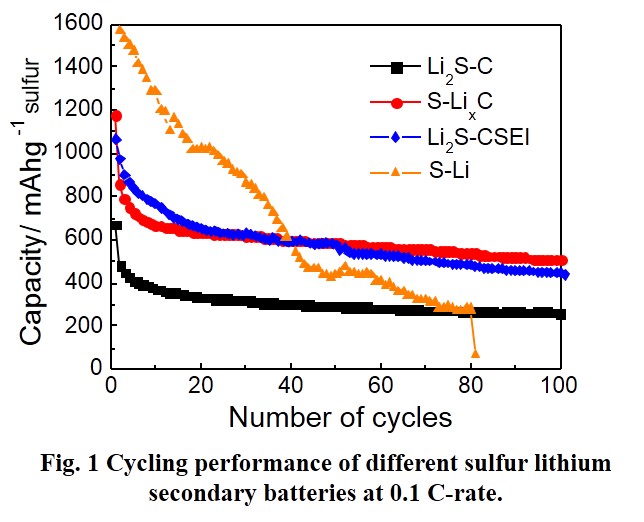