Maryland D (Gaylord National Resort and Convention Center)
B. Gattu, R. Bandi, M. K. Datta, P. M. Shanthi (University of Pittsburgh), P. Jampani (Department of Bioengineering, University of Pittsburgh), and P. N. Kumta (University of Pittsburgh)
Silicon based anode has attracted considerable attention to replace graphite as a high-energy density anode material for the next generation lithium ion batteries due to the high theoretical specific capacity of silicon (~4200 mAh/g). However, bulk crystalline silicon exhibits poor performance due to colossal volumetric expansion (~400%) following reaction with lithium. The past decade has witnessed different approaches to address and counter the issue of mechanical degradation of silicon anodes. These approaches involve the use of silicon nanoparticles [1], composite structures of amorphous silicon [2], active-inactive matrix [3], electrodeposited thin films and VACNT-Si hetero-structures [4-6]. On the other hand, the cathode systems are restricted due to low capacities (160-190mAh/g) and sulfur has been shown as a promising alternative with a theoretical capacity of ~1600mAh/g. However, sulfur cathode suffers from polysulfide dissolution and electrode passivation which results in poor performance, high capacity fade and subsequent failure of the electrodes. [7-10]

In the present work, a promising anode material for Li-ion batteries consisting of active material deposited on carbon nanotubes (CNT) has been synthesized as a viable electrode generated by a commerically viable facile electrodeposition (ED) process. At first, a thin layer of catalyst M on Cu substrate (denoted as M-Cu) has been developed using a high throughput solution based coating technique. The SEM image and EDAX mapping (Fig 1a) of M-Cu confirms that a distinct layer (<1µ) of catalyst M is coated on the Cu foil. Subsequently, a forest of carbon nanotubes (CNTs)is grown on the M-Cu substrate by CVD technique using a mixture of cost effective carbon precursors and argon at varying temperatures and times. The SEM image of the CNT/M-Cu (Fig 1b) shows the formation of CNTs well adhered to the M/Cu substrate. The thickness of the CNT layer varies from ~30µ to ~200µ depending on the deposition time. Amorphous Si is deposited on the CNT/M-Cu by a commerically viable electrodeposition process using a non aqueous ionic electrolyte consisiting of silicon containing precursors. The SEM analysis of the Si deposited CNT/M-Cu (Fig 1c and Fig 1d) shows a uniform film of Si deposited on the CNTs with the size of the silicon particles being < 100nm. Furthermore, the CNT/Cu substrate was used to develop S/CNT nanostructured composite on Cu substrate as the cathode. The electrodes of these nanocomposites (Si/CNT and S/CNT) were initially tested in a half cell configuration within the voltage range of 0.01V – 1V vs. Li/Li+in their respective electrolyte system without addition of any binder.

The electrodeposited Si on CNT/M-Cu (denoted as ED-Si/CNT) was tested as an anode in Li/Li+ electrochemical cell without any further addition of additives. The ED-Si/CNT electrodes show a first cycle discharge and charge capacity of ~ 3435 mAh/g and ~2050 mAh/g, respectively, with a first cycle irreversible (FIR) loss of ~35-45% (Fig 1e) at a charge/discharge current rate of ~300mA/g. The ED-Si/CNT also shows an excellent capacity retention with a stable capacity of ~1870 mAh/g up to 70 cyles (Fig. 1e).

The electrochemical performance of S/CNT binderless electrode shall be reported and discussed along with complete characterization of the electrodes using Raman Spectroscopy, X-ray Diffraction, TEM and XPS to understand the behavior of these respective electrode system with respect to Li/Li+system.

The authors gratefully acknowledge financial support of the DOE-BATT (DE-AC02-05CHl1231), DOE-PNNL and NSF (CBET-1511390) programs. The authors also acknowledge the Edward R. Weidlein Chair Professorship funds and the Center for Complex Engineered Multifunctional Materials (CCEMM) for support of this research. 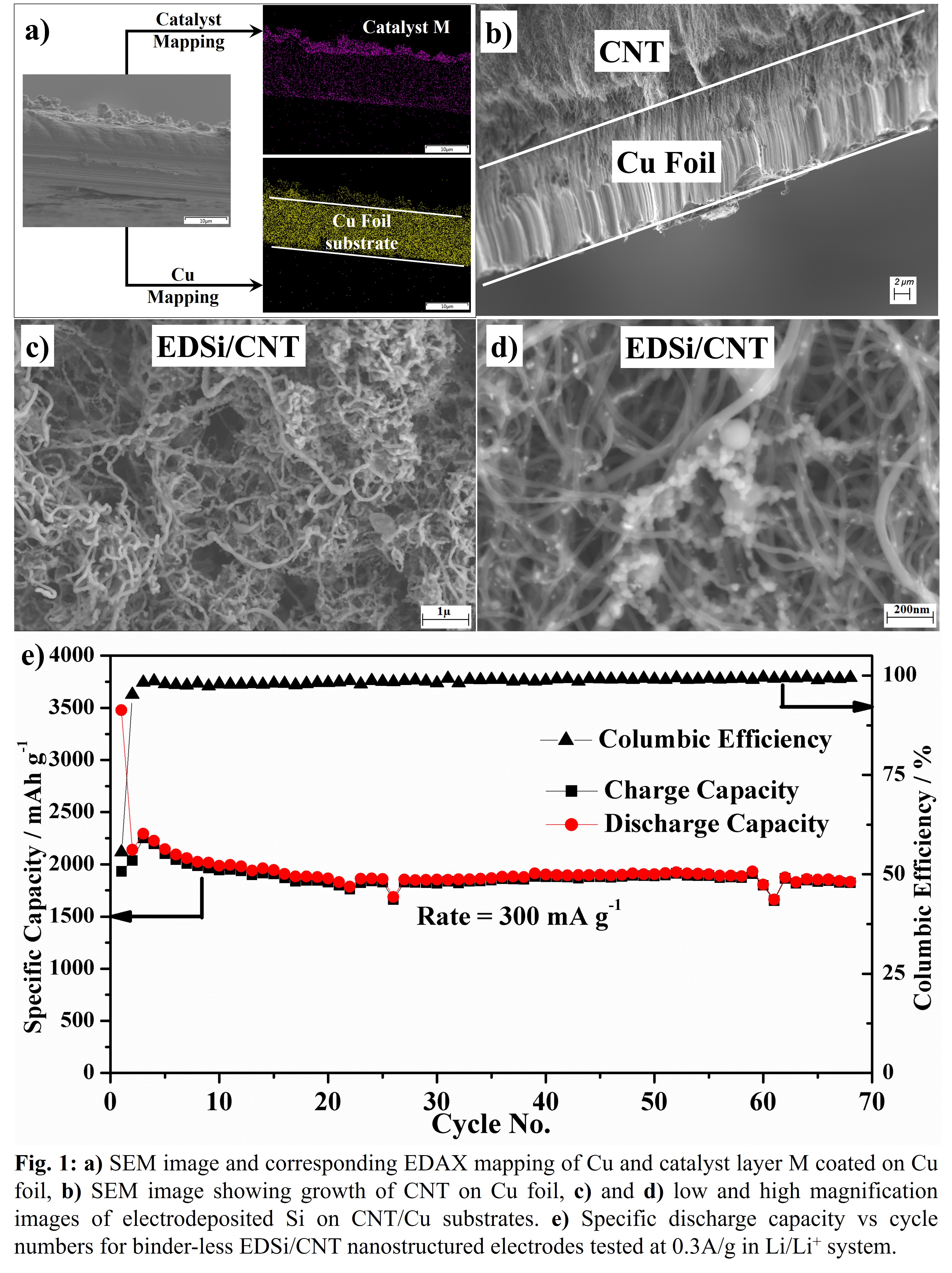