Prince George's Exhibit Hall D/E (Gaylord National Resort and Convention Center)
S. E. Lee and M. H. Tang (Drexel University)
Sodium-ion batteries offer a low-cost and earth-abundant alternative to lithium-ion batteries. While strides have been made in improving electrode materials to enable higher charge capacities and transfer rates, the lifetime of sodium-ion batteries still poses a hurdle to their commercial success. The unstable formation of a surface-electrode interphase (SEI) is one of the leading causes of irreversible capacity losses. While the SEI has been studied extensively in lithium-ion batteries, only limited knowledge exists about SEI growth sodium systems.

This study sets out to determine the role of carbon-surface chemistry in forming a stable, passivating sodium SEI. While many factors play a role in SEI formation, the SEI is inherently a surface reaction. Surface groups may either act as catalytic sites, controlling selectivity for specific electrolyte reduction reactions, or as nucleation sites to promote the precipitation and adhesion of insoluble decomposition products. Carbon surface groups are well-known to modify catalytic activity in a range of applications4,5, but their effects on the sodium SEI are unknown. Prior work shows that different decomposition products result at different carbon morphologies in lithium-ion batteries.1,2 It has also been observed that increasing the degree of graphitization in pyrolytic carbon through high temperature CO2 treatment decreases the rate of electrolyte decomposition.3

Our approach uses carbon thin films to target only surface interactions. Isolating surface from bulk properties is ideal because bulk properties often have to be engineered to meet a wide variety of system requirements such as conductivity, charge capacity, rate capability and solid electrode potential. Applying a surface treatment that does not impact these properties enables learnings of the study to be applied more readily. The use of a thin film also simplifies analysis of interfacial phenomena by removing the impact of bulk properties like excess intercalation capacity and the porosity. Finally, the thin film does not require polymeric binders, reducing the risk of additional side reactions which produce competing degradation products and inaccurate calculations of parasitic current.

Thin carbon films are made by spin-coating photoresist onto a substrate and pyrolysis under inert conditions in a tube furnace. Varying the duration and temperature during pyrolysis can change the degree of carbon graphitization6,7. The use of photoresist also enables film thickness and geometry to be easily controlled. Functional groups on the surface of the carbon film are modified after pyrolysis through high temperature treatment, in the presence of gases such as O2, H2, and CO2. We have demonstrated this thin film synthetic method through the optimization of spin coating and pyrolysis parameters.

Electrochemical performance of films is evaluated in a 3-electrode cell, using cyclic voltammetry(CV) and chronoamperometry to form SEI layers. We have shown that these films are electrochemically active and that films formed under different conditions yield different electrochemical behavior. Figure 1 compares the CV scans of two films. Sample A shows reversible sodium intercalation near 0.1V vs. Na/Na+ and a peak for electrolyte reduction below 0.8V, while sample B does not exhibit this reversible intercalation behavior. Electrochemical results are correlated with ex-situ measurements of surface chemistry and morphology obtained using X-ray photoelectron spectroscopy (XPS) and scanning electron microscopy (SEM) to relate performance to electrode properties. By modifying the surface groups on carbon film this work will determine the specific interactions that are favorable for SEI formation in sodium-ion batteries. 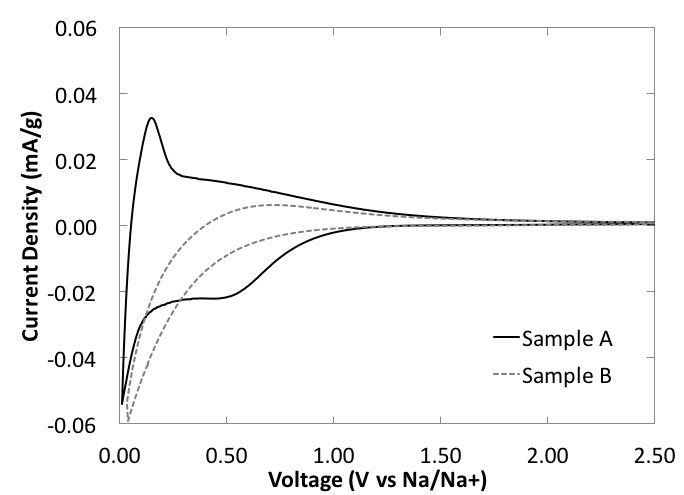