Camellia 4 (Gaylord National Resort and Convention Center)
R. Ishikawa, S. Hirata, A. Tsurumaki-Fukuchi, M. Arita, Y. Takahashi (Hokkaido University), M. Kudo (Kyusyu University), and S. Matsumura (The Ultramicroscopy Research Center, Kyushu University)
Resistive random access memories (ReRAMs) and the conductive bridging RAMs (CBRAMs) are expected as the non-volatile memories of next generation. The switching operation of CBRAM is understood to occur with formation and rupture of the conductive filament of Cu or Ag based on the electrochemical reactions [1]. This was experimentally confirmed by in-situ transmission electron microscopy (in-situ TEM) [2]. The previous in-situ TEM works investigated mainly filament formation in the SET process giving the low resistance state (LRS), and few works have examined the RESET process achieving the high resistance state (HRS) [3-4]. Considering the realistic ReRAM operation, repetitive SET/RESET switching operations are important to be investigated by in-situ TEM, since the results contain information for switching reliability. In practical CBRAM test devices, the bilayer structure of solid-electrolyte and oxide layers has been adopted for good retention, speed and stability [5]. In this study, in-situ TEM was applied to the bilayer CBRAM, and the change of the Cu microstructure were observed during cyclic SET/RESET switching. The origin of device degradation will be briefly discussed.

The CBRAM of Pt/Mo/Cu(30 nm)/MoOx(20 nm)/Al2O3(5 nm)/TiN was prepared on a Si wafer. All layers were deposited by conventional sputtering or reactive sputtering using Ar-O2. It was processed to be small devices (less than some hundreds of nanometers) using the focused ion beam (FIB) technique. Samples were set in a special TEM holder with a piezo actuator, and in-situTEM experiments were performed during the SET/RESET switching cycles.

An example is shown in Fig. 1, where 47 SET/RESET operations were repeated. In the left panel of Fig. 1(a), I–V switching curves in the 1st and 42th cycles, where the formation and rupture of Cu filament was clearly observed in the TEM images, are compared. Though the resistance in HRS was relatively low, clear hysteretic switching curves are identified in the characteristics. This low HRS resistance may be caused by the redeposits of electrode materials formed during the FIB process. In the right panel of Fig. 1(a), in-situ TEM images extracted from a video of the 42th cycle are shown. Corresponding states are marked in the I–V graph; state-1 of HRS before SET, state-2 of LRS after SET, and state-3 of HRS after RESET. In the region marked with red circle, dark contrast corresponding to the Cu filament appeared/disappeared in the Al2O3 layer after SET/RESET while a little of dark contrast exists in the Al2O3layer both before SET and after RESET. This result means that the resistance change occurred based on the filament model.

Comparing two I–V graphs in Fig. 1(a), decreased resistive switching ratio was obtained in the 42nd switching. This gives important information on the endurance failure. The resistance values (@−1 V) in cyclic switching operation are summarized in the left panel of Fig. 1(b), where data in accidental switching-less cycles were omitted. The resistance in the both HRS and LRS gradually decreased and the on/off window became narrow. In the right panel of Fig.1 (b), TEM images of the initial state and after the 37th RESET are compared. The contrast of the central part of the Cu layer gradually turned brighter during 37 switching cycles. On the other hand, the center of the Al2O3 became darker. This indicates that Cu moved into the MoOx/Al2O3layer at SET did not return to the Cu electrode completely even after RESET. This can induce formation of Cu deposit in the switching layer and holes in the Cu electrode. As the result, resistance decreased with the switching cycle, and endurance failure should occur. This suggests power balance of the SET/RESET process should be kept adequately to achieve high endurance in CBRAMs. 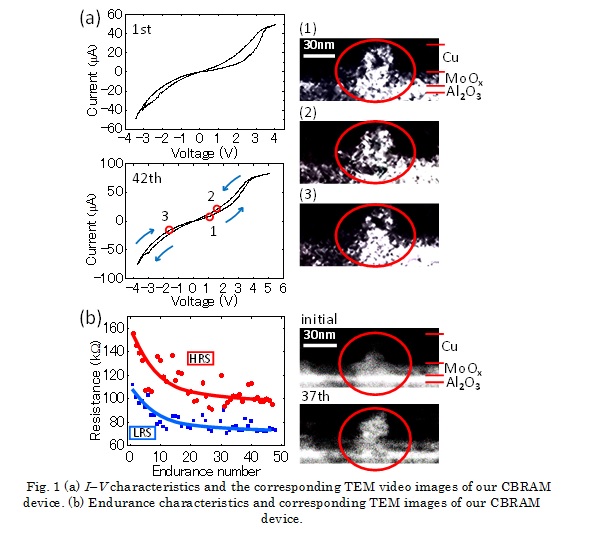