National Harbor 14 (Gaylord National Resort and Convention Center)
T. Mabuchi and T. Tokumasu (Tohoku University)
The polymer electrolyte membrane (PEM) is one of the principal components for polymer electrolyte fuel cells. As the phase separation is considered one of the primary factors affecting its performance, the morphological properties of PEM have been studied experimentally and theoretically. Under good solvent conditions for the polymer backbone, where solvents dissolve the backbone chains, ionomers exhibit polyelectrolyte-type behavior, forming loose ionic aggregates. In sufficiently polar solvents, ionomer backbones undergo aggregation and phase separation. This process results in the formation of a solid PEM at high ionomer concentration. Perfluorosulfonic acid (PFSA) ionomers such as Nafion (developed by DuPont) are currently the principal electrolyte and separator materials adopted for use as PEMs. Chemically, Nafion is a random copolymer that consists of hydrophilic sulfonate groups and a hydrophobic polytetrafluoroethylene backbone, which together form microphase-separated higher-order structures. Under sufficiently hydrated conditions, PEMs exhibit high mechanical robustness, warranted by hydrophobic backbone segments, as well as good water retention and high proton conductivity, conferred by the high volumetric ion density. The characterization of the ionomer structures has been extensively studied using experimental measurements such as small-angle neutron scattering (SANS), wide-angle neutron scattering (WANS), small-angle X-ray scattering (SAXS), and nuclear magnetic resonance (NMR). They observed that hydrophobic backbones of Nafion form the cylindrical-like core of self-assembled ionomer structures while ionic groups are located at the periphery of this aggregates. Based on a combination of scattering and microscopy, the rod-like aggregates in well-hydrated PEMs were observed. The proton conductivity and mechanical strength of solution-cast membranes are correlated with the properties of ionomer dispersions in solutions. Theoretically, while most of studies have primarily focused on the solid membrane state with water volume fraction significantly below 50%, ionomer aggregations in solutions can also be an important phenomenon to understand the self-assembly behaviors of ionomers as key structure-forming elements in ionomer films. In this study, ionomer aggregations in water/alcohol solutions have been investigated using coarse-grained (CG) molecular dynamics simulations to understand the dependence of aggregation behaviors on the water and alcohol fractions. The use of CG models is a valuable tool to prove the time and length scales of systems beyond what is feasible with traditional all atom models. Our model has been developed based on the MARTINI force fields, which is in close connection with more detailed atomistic models in terms of thermodynamic data, in particular hydration/partitioning free energies. The whole CG model of Nafion copolymer, as shown in Fig. 1, includes a part of the atomistic level configuration of a Nafion chain. A three-monomer unit of polytetrafluoroethylene (PTFE) (-(CF2)3-) are coarse-grained as a spherical bead of diameter 0.47 nm, and one side chain is coarse-grained as two spherical beads. This model is comparable to the inter-distance of ~2 nm between side chains and a side chain length of ~1 nm in the Nafion ionomer with EW = 1100. To include the effect of polarization in water model, which is significant at the interfaces between water and other phases and in the vicinity of charged particles. The initial configurations were generated by randomly placing 15 ionomer chains in a box with periodic boundary condition in all directions. Water and 1-propanol CG beads were then added based on the water/1-propanol molar fractions. All the solutions were fixed at an ionomer concentration of 5 wt%. The equilibration of the systems was first carried out with NPT MD simulations at T = 300 K and P = 1 atm for 100 ns. The additional NPT ensemble for 50 ns was then performed for the production. The dependence of NPA content on the ionomer structures was studied by systematically changing the NPA content in the system. It was found that ionomers form the bundle-like structures with cylindrical shape as shown in Fig. 2, which are in general agreement with cylindrical-like structures found in experimental scattering measurements of Nafion solutions. The ionomer aggregation size was found to tend to be larger and more dispersive at higher NPA contents, although the ionomers aggregated into one cluster at all NPA contents. 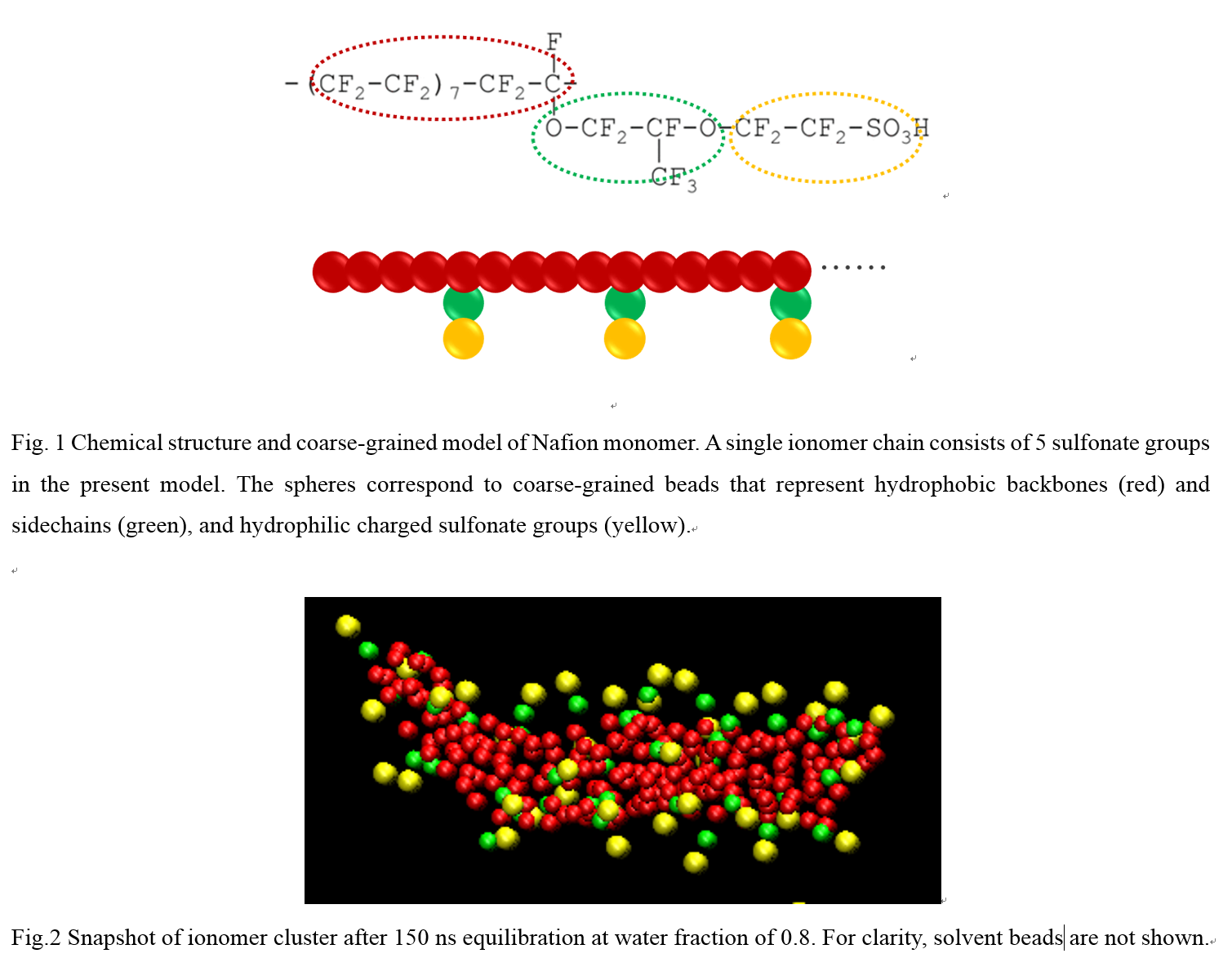