Chesapeake G (Gaylord National Resort and Convention Center)
C. Y. Chen, T. Tsuda (Graduate School of Engineering, Osaka University), Y. Oshima (Japan Advanced Institute of Science and Technology), and S. Kuwabata (Osaka University, AIST)
Metal-ion, metal-sulfur, and metal-air batteries have recently attracted tremendous interests owing to their much higher gravimetric and volumetric energy densities as compared to conventional Li-ion batteries (LIBs). The metallic anodes employed in these next-generation batteries include Li, Na, Mg, Al, and Zn.1 So far, great effort has been devoted on the research of high-performance cathode materials. However, many technical issues associated with the metallic anodes such as dendritic growth, formation of passivation layer, as well as incomplete dissolution, have yet to be addressed. Moreover, the fundamental differences in the nature of these elements are far less exploited.

To better understand the electrochemical behavior of metallic anodes, it is of importance to directly monitor their morphological and chemical evolution during the operation. There have been several attempts in developing new approaches toward this end over the past few years. In situ transmission electron microscopy (TEM) is expected to be a power tool for visualizing the dynamic processes of metallic anodes at a nanoscale.2,3 Most previous studies in this emerging field use a liquid cell with two silicon nitride windows to prevent vaporization of the electrolyte and involve demanding fabrication procedures. Besides, the presence of window materials largely reduces the image resolution.

Take advantage of non-volatility of ionic liquids, herein, electrochemical behavior of metallic anodes was investigated by a specially designed window-less TEM holder. The miniature cell was composed of a counter electrode as the metal source, a modified TEM grid as the working electrode, and a sheet of IL-contained separator was hold between the electrodes. The cell was assembled in an Ar-filled glovebox and all the electrochemical measurements were conducted in the TEM chamber using a potentio/galvanostat. The typical images obtained are shown in Figure 1. In the instance of Li, three distinct types of deposits are identified (fiber, moss, film). It is worth mentioning that most of the Li microstructures reported essentially fall into these three categories, implying that our TEM results are representative of the actual electrodes. Majority of the deposits possess a fiber-like structure. These images are of good resolution and fairly consistent with the common dendrite morphology observed by ex situ SEM. With the help of window-less configuration, we can confirm that the deposits are fully covered with a thin solid electrolyte interphase (SEI) of a thickness of 10–20 nm. Furthermore, electron diffraction analysis is applicable for revealing the structural and compositional information of the deposits. These findings encourage us to further exploring other metallic anodes and comparing the features of each metal system. In summary, our approach provides possibilities to rapidly scrutinize the interface between the electrode and the non-volatile electrolyte, e.g., ionic liquid, glass- and ceramic-based electrolytes, for future secondary battery applications. 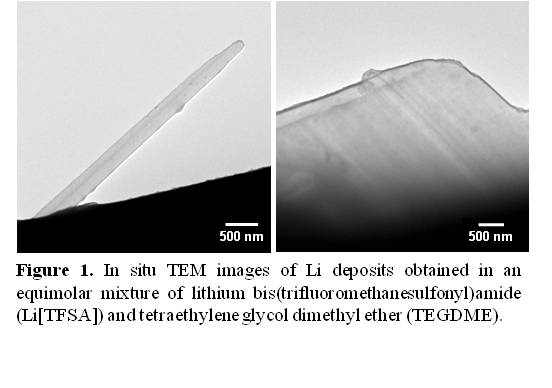