Chesapeake G (Gaylord National Resort and Convention Center)
S. Cihangir, A. P. Abbott, and K. S. Ryder (University of Leicester)
Electrodeposition is commonly used for the deposition of metallic and composite coatings. It is useful as it can coat complex 3D structures and can be used for the deposition of alloys. There are a few disadvantages; it is relatively slow to build up thick coatings and in some cases the current efficiency can be low. In this study a fundamentally different method for carrying out electrodeposition is demonstrated. Here instead of dissolving metal from the anode and depositing it on the cathode a powder of the coating metal is put in contact with the cathode and pulse plating sequentially dissolves metal from the powder and then deposits it between the powder grains. A single metal grain used for initial experiments as schematically shown in Figure 1. By this method super-efficient deposition (efficiency >100%) can be achieved, and thick layers can quickly be deposited. This can in principle be carried out in any media but in this study ionic liquids were used to increase the current efficiency of the process. The method is demonstrated using both zinc and copper. It is shown that using these media certain crystal planes can be promoted and ordered deposits are obtained. The morphology of the surfaces was characterized using SEM, X-ray diffraction, and 3D optical microscopy techniques. 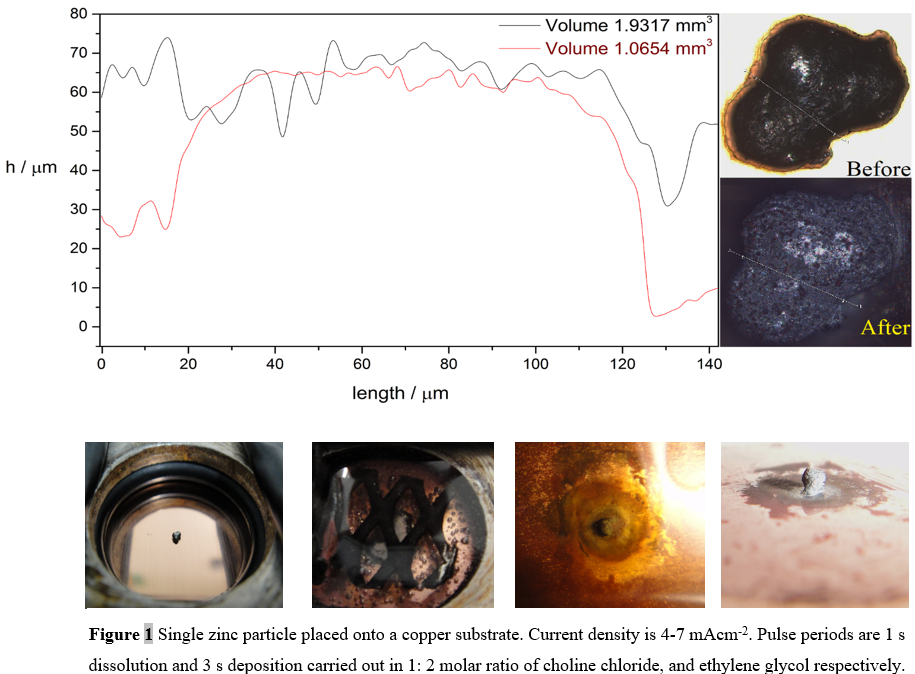