1202
Observation of Conductive Filament in CBRAM at Switching Moment

Camellia 4 (Gaylord National Resort and Convention Center)
S. Muto, R. Yonesaka, A. Tsurumaki-Fukuchi, M. Arita, and Y. Takahashi (Hokkaido University)
Conductive bridging RAM (CBRAM) is one of the promising candidate for the next generation non-volatile memory due to its low-power consumption, high speed operation, high scalability, etc. Its switching mechanism has been actively studied for practical use and the electrochemical reaction by voltages has got a consensus to contribute the resistive switching of CBRAM [1]. However, the dynamics of the filament formation or rupture during the switching operation is a question under debate. For giving the answer, investigation using in-situ transmission electron microscopy (in-situ TEM) has been reported [2]. While the conventional CBRAM devices are composed of stacked layers, the lateral (planar) type structure (Fig. 1) is useful for detailed observation of the conductive filament [3]. However, there were few reports on the switching cycles using in-situ TEM discussing the state of the filament during the device operation. In this work, the filament evolution in the switching operation was investigated by in-situ TEM measurements of the lateral type CBRAM and the relation between the behavior of the filament and the resistance change was discussed.

A schematic of the sample is shown in Fig. 1 which was sputter deposited on an electron-transmitting SiN membrane (25 nm thick). Both electrodes (A and B) were Cu in this experiment for easy observation of Cu movement, though it was not normal bipolar CBRAM designing. The WOX switching layer covered the electrodes and filled the gap. In Fig. 2 and Fig. 3, data of the “set” (achieving the low resistance state: LRS) and “reset” (achieving the high resistance state: HRS) operation are shown, where the current–voltage (I–V) switching curves and TEM images extracted from a video are compared. The electrode A was grounded while the electrode B was biased. The bias voltage is indicated in each TEM image.

The resistance of the device in the initial state (~500 kW) gradually decreased to nearly 400 kW during several I–V cycles. Cu ions were thought to be dissolved into the gap region. Afterwards, CBRAM switching started. An example of the second set cycle is shown in Fig. 2. The corresponding TEM images showed weak changes at the gap (Figs. 2(1)−(3)). Increasing the negative voltage to the electrode B, the current increased gradually, but no clear change was seen in Fig. 2(1) taken just before abrupt set switching. Even when an abrupt switching occurred at −1.110 V, there was only a faint contrast changes (Figs. 2(1) and (2)). As seen in Fig. 2(2), the electrode A (anode) shrank and the gap edge became clearer. Larger structural changes started to be observed by increasing currents (Fig. 2(3)). The growth rate of the filament seems to be accelerated by current flow and generated Joule heat. The direction of Cu filament growth shown in these TEM images follows the electrochemical redox model. Resistance changed from 31.9 kW to 2.50 kW.

The subsequent reset process is shown in Fig. 3, where the narrowest part of the filament in Fig. 2 was observed with a slightly large magnification. As identified in this I–V curve, current increased rapidly at 0.530 V. However, no remarkable structural changes were seen at the switching moment (Figs. 3(1) and (2)). Clear contrast change was seen only when further current was flown. As seen in Fig. 3(3), the narrowest point of the filament became brighter, and the filament is thought to rupture there. Resistance changed from 2.50 kW to 12.7 kW.

In conclusion, the microstructural change in the switching region of the lateral CBRAM was investigated by in-situ TEM measurement. The observation result presented here surely follows the conventional redox model [1]. On the other hand, a recent study has suggested that the scheme of the filament growth/erasure also depends on the switching history [4]. For full understandings of the complicated motion of the filament in CBRAM operation, further investigation should be performed to observe very faint TEM contrast change especially at the cyclic set/reset operations. We are grateful for supports by JSPS KAKENHI (15H01706, 16H0433906 and 16K18073) and MEXT Nanotechnology Platform Program (Hokkaido Univ. and Kyushu Univ.). 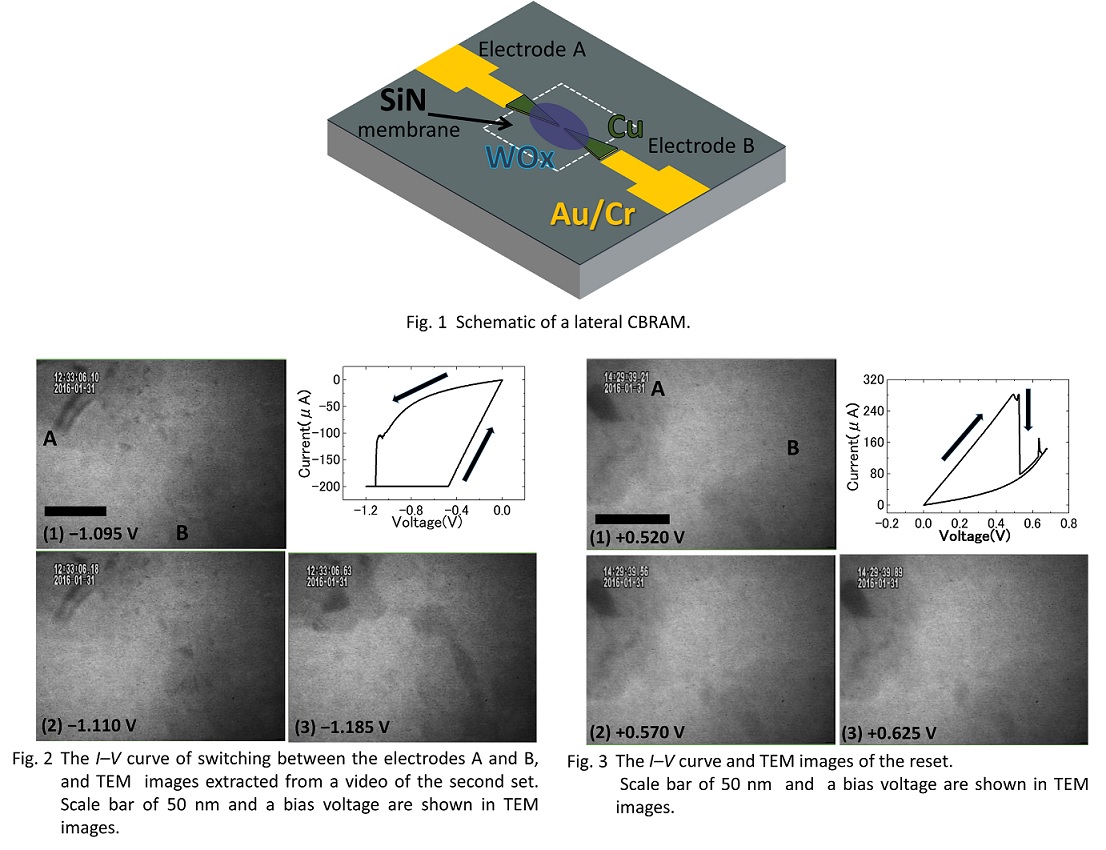