In recent years, the increased demands such as a higher capacity, power, and cycle stability are importantly issued to realize next generation Li-ion batteries (LIBs). The design and choice of electrode materials (i.e., anode and cathode materials) can be of key factors to satisfy and to improve such electrochemical performance of LIBs. Among the anode materials, silicon (Si) has been considered as a pormising candidate because of the highest theoretical capcity of 4200 mA h g-1 (based on Li-alloying/dealloying reaction: Si + 4.4Li ↔ Li4.4Si), low electrochemical potential (< 0.5 V vs. Li/Li+), and abundance, nevertheless the practical application in LIBs is still challenging due to its limitation; a severe volume change (~400%) during the Li-alloying/dealloying reaction and thereby leading to a crack and pulverization, resulting in a rapid capacity facding.1 To overcome this drawback, tailoring of unique nanostructures and/or nanocomposite such as Si-carbon composites can be an effective approach.2

Herein, we design the fabric-like nanocomposite based on Si nanoparticles-embedded nitrogen-doped carbon nanofibers (Si@N-CNFs) that are synthesized via a facile single-nozzle electrospinning followed by carbonization process, and report their Li-storage performance along with an effect on use with and without polyethylene glycol (PEG). To make Si@N-CNFs nanocomposite, the spinnable solution, including urea, PEG (w/wo), polyacrylonitrile (PAN), and polyvinly butyral (PVB), are first prepared. The urea and PEG are used as a source for N-doping and a non-ionic surfactant to give highly dispersed Si nanoparticles into the solution, respectively. The weight ratio of Si to PEG here is 1 to 8. The as-prepared final solution was poured into the 10 mL plastic syringe and electrospinning was carried out by appling a voltage of 14 kV at single-nozzle electrospinning system. Complete w-Si@N-CNFs nanocomposite is obtained through the stabilization of the as-spun Si@N-CNF at 280 oC in for 2 hr in air and subsequent carbonization at 800 oC for 2 hr in N2 atmosphere, which is clearly confirmed by X-ray photoelectron spectroscopy (XPS) and transmission electron microscopy (TEM). As the conuterpart, wo-Si@N-CNFs nanocomposite that is obtained without PEG is also prepared with the same procedure.

Field-emission electron microscopy (FE-SEM) observation shows that both as-spun w-Si@N-CNFs and wo-Si@N-CNFs nanocomposites are a fabric-like formation consisting of one-dimensional (1-D) nanofibers with c.a. 400 nm in diameter. However, as for wo-Si@N-CNF, aggregated Si particles developed a droplet like structures with diameter of over 1 µm in the middle of nanofibers, randomly. After carbonization, the morphology of w-Si@N-CNFs was reminiscent of as-spun w-Si@N-CNFs with a shruken diameter of 300 nm due to a decomposition of some elements (i.e., H and O) in CNFs at 800 oC (Figure 1a) and that of wo-Si@N-CNFs represented similar fabric morphology to w-Si@N-CNFs with grainy texture on the surface of CNFs (Figure 1b). More importatnly, the enlarged FE-SEM image (inset of Figure 1a and b) reveals obviously that the well-dispersed Si nanoparticles are embedded uniformly into N-CNFs, whereas some of Si nanoparticles are aggreagted and/or isolated in their counter part (wo-Si@N-CNFs), which induce the grainy texture on surface of wo-Si@N-CNFs.

We evaluated the Li-storage performance of w-Si@N-CNFs nanocomposite anodes. w-Si@N-CNF nanocomposite exhibits the reversible capacity of 1,045 mA h g-1 at a current density of 200 mA g-1, the excellent capacity retention of 61% after 200 cycles, and a high initial coulombic efficiency of 97% at second cycle, compared to Si nano-particles (Figure 1c). The great eletrochemical performance of w-Si@N-CNFs nanocomposite can be associated with the advantageous geometrical features of the uniform encapsulation of highly dispersed Si nanoparticles into N-CNFs with using PEG as well as network of carbon fabric structures, and thereby offering both high electrical conductivity and soft buffer platform for preventing the huge volume expansion of Si nanoparticles. 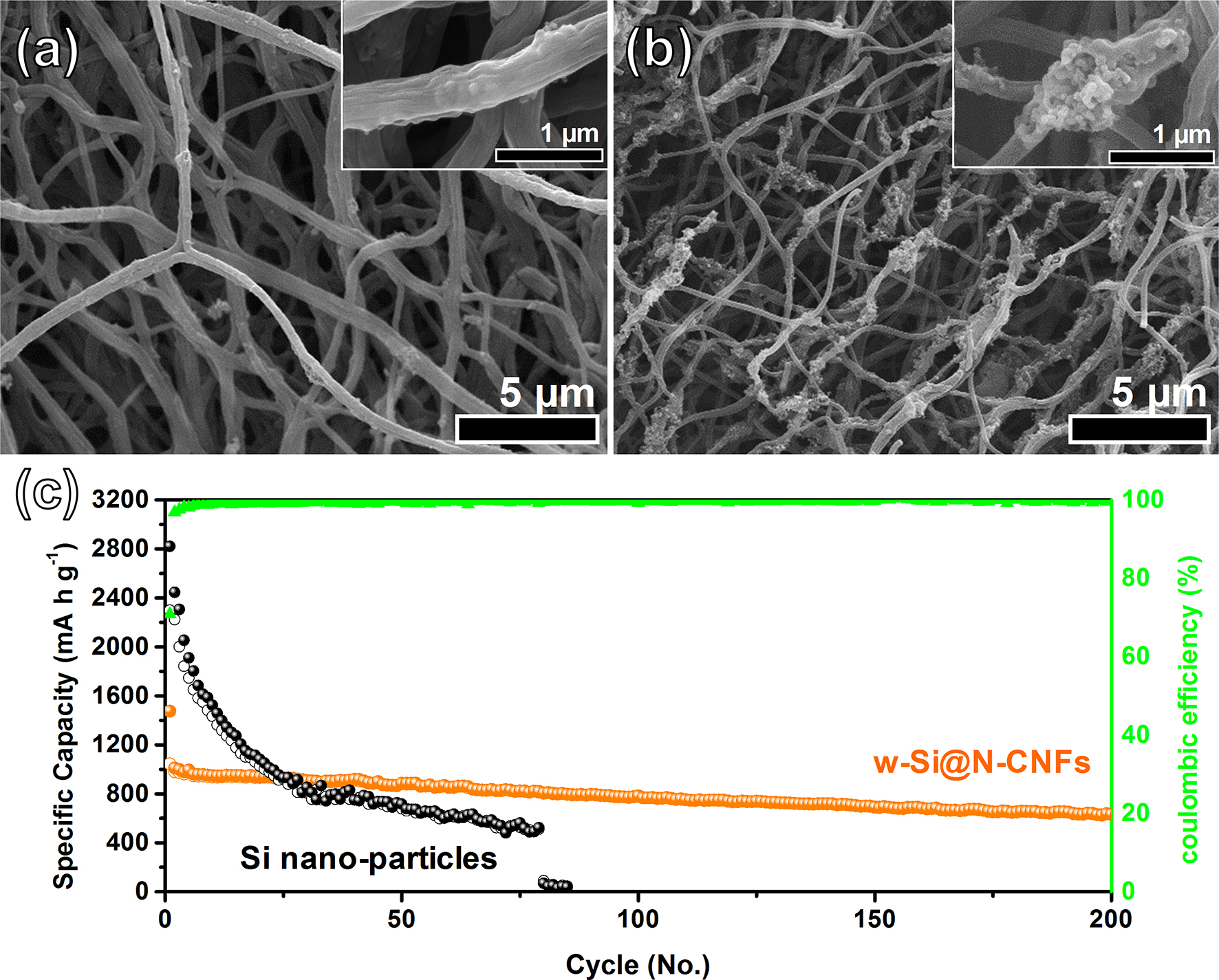