National Harbor 8 (Gaylord National Resort and Convention Center)
M. Cazot (KEMWATT, Rennes, LEMTA, Université de Lorraine, Vandoeuvre-lès-Nancy), G. Maranzana, S. Didierjean, and J. Dillet (LEMTA, Université de Lorraine, Vandoeuvre-lès-Nancy)
Reducing the carbon footprint of electricity generation is becoming a major concern. With the development of renewable sources (solar, wind), there is a growing interest for grid-connected storage systems, because they can buffer the intermittency of renewable energy. Among the conceivable storage solutions, the redox ﬂow battery (RFB) is one of the most promising. Its flexibility is very advantageous: power and energy capacity can be tailored independently by stack design and electrolyte volume, respectively. The most popular technology is the all-vanadium redox flow battery, but the French startup Kemwatt is developing an attractive alternative: an alkaline organic redox ﬂow battery. Lots of research papers about RFB are already available but many of them deal with the vanadium technology and are based on modelling [1-2]. Moreover, industrial development has prevailed over laboratory research at this point. But to optimize RFBs and solve the remaining roadblocks to mass production, scientific work is still required for fundamental understanding.

In the present work, an instrumented and segmented cell is developed based on Kemwatt’s RFB technology. It is used to perform a fine analysis of the system, by following at the same time the local current density and the potential evolutions inside the cell, as it was already done for hydrogen fuel cells [3-4]. The operating parameters are controlled and local electrochemical characterizations such as polarization curve and impedance spectroscopy are realized. The two electrolytes used in Kemwatt’s system are first characterized separately thanks to a symmetric cell set-up, both sides of the cell being filled with the same electrolyte. The State Of Charge (SOC) of each side is modified as needed by applying a constant current and the impedance variation is measured. It reveals that the resistance is quite constant during a cycle, but increases sharply when the electrolyte composition gets close to 0 or 100% SOC. As shown in the figure, the resistance variation follows the same trend for both electrolytes. However, the study points out the complexity of the electrochemical behavior of the anolyte, which needs to be investigated further. It is also observed that the pressure drops vary with the SOC of the anolyte; an ex-situ rheological study confirms that the fluid properties depend on both its SOC and its age in the process. The catholyte, however, has constant flow properties. These two independent studies inform on the limiting components of the system. A 1D-model is developed and compared to experimental data. By inverse problem method, the membrane resistance and the reaction rate constant are estimated for both electrolytes. The membrane appears as the major resistive contribution; its ionic conductivity is lower than when measured by an ex-situ method. It implies an adverse interaction between the membrane and the electrolytes in the battery.

Afterwards, the segmented cell is used to study the whole system. It highlights significant current gradients along the cell at low SOC and pinpoints a mass transport limitation at the channel outlet. These heterogeneities appear earlier during discharge with a lower flow rate, preventing from discharging the electrolytes completely. The results matches the ones obtained with the symmetric cell. 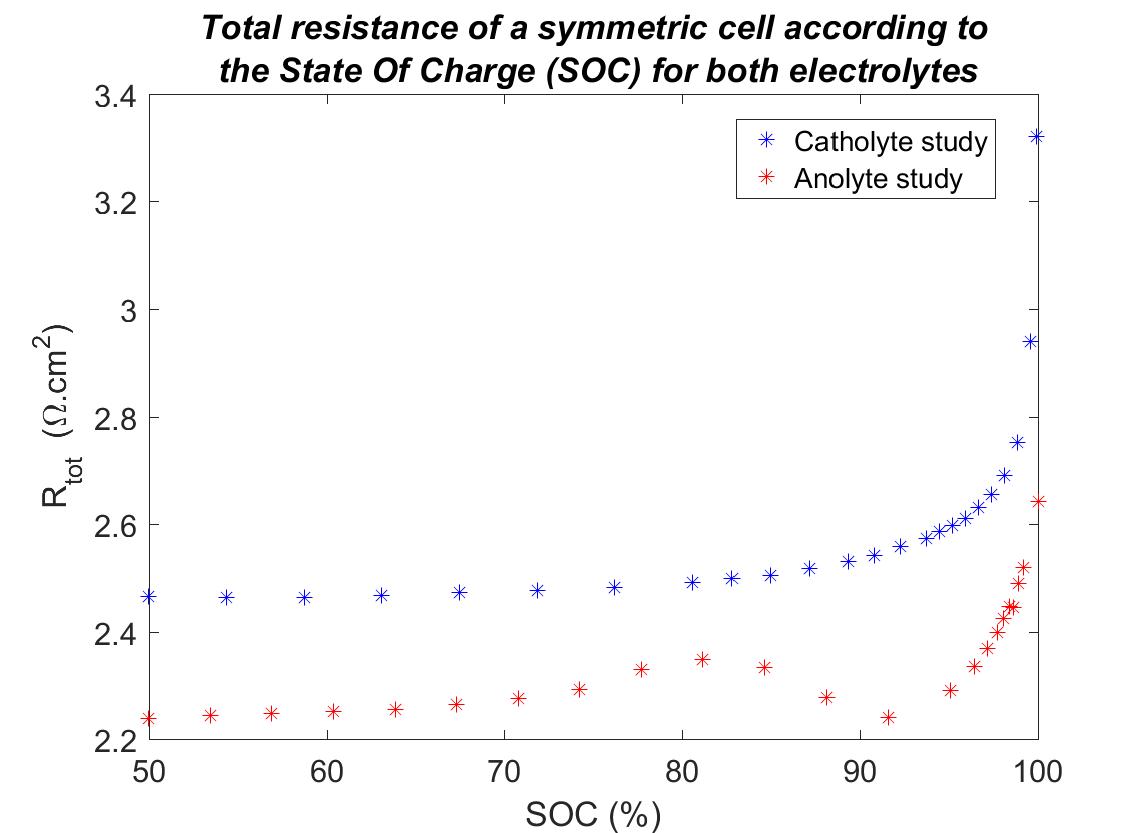