Previous modeling studies of the superionic lithium-rich anti-perovskites conductors focused on Li3OX (X = Cl, Br) structures and reported a variety of the charge transport mechanisms ranging from the low-barrier three-atom hop mechanism involving vacancies, Li hops to the nearest neighbor, Li interstitial dumbbells, and diffusion of the Li+ interstitials in LiCl-deficient Li3OCl that outnumber vacancies by 2–3 orders of magnitude as predicted by the shell model. It is, however, quite challenging to completely remove protons from these anti-perovskite conductors during synthesis, highlighting the importance of understanding the influence of protons on conductivity and electrochemical properties for these superionic lithium-rich anti-perovskite conductors.(1, 2) Born-Oppenheimer molecular dynamics (BOMD) simulations of Li2+xOH1-xCl (0≤x≤1) solid electrolytes were performed in order to gain insights into the mechanism of lithium transport and the influence of H concentration, complementing previous modeling studies of H-free antiperovskites. The simulation cell was comprised of 320 atoms. Density Functional Theory (DFT) calculations were performed with the QUICKSTEP module of the CP2K code, which implements the dual Gaussian and Plane Waves (GPW) method. The gamma point supercell approach was used in combination with 3-dimensioanl Periodic Boundary Conditions (PBC). Calculations were performed using the spin-polarized Perdew-Burke-Ernzerhof (PBE) exchange correlation functional with Grimme’s D3 dispersion correction.

BOMD simulations predicted a significant enhancement of the lithium diffusion with the increased fraction of protons in agreement with experimental data. The lithium transport mechanism was found to be closely coupled with the rotation of a relatively short OH-group within the protonated electrolytes. Moreover, lithium jump events were found to be highly-correlated. Figure 1a shows a snapshot of the simulation box. In order to gain further insight into the transport mechanics, the motion of the fastest lithium cations in Li2.5OH0.5Cl solid electrolyte are highlighted with different colors. Overlap between trajectories of the fastest lithium cations shown by red arrows is indicative of the highly-correlated fashion of the lithium jumps.(2)

We will also discuss changes of band gaps and band alignments that were calculated using DFT hybrid functionals as markers for electrochemical stability. We anticipate that our findings will reduce the existing confusions and show new avenues for tuning solid electrolyte compositions for further improved Li-ion conductivities.

Figure 1. A snapshot from MD simulations of Li2.5(OH)0.5Cl (a). Trajectories of the fastest Li+ cations during 10 ps BOMD run of Li2.5OH0.5Cl SSE using different colors to denote distinct Li+ (b). Red arrows show overlap between the Li+ trajectories that is indicative of the Li+ correlated motion for the fastest moving Li+. 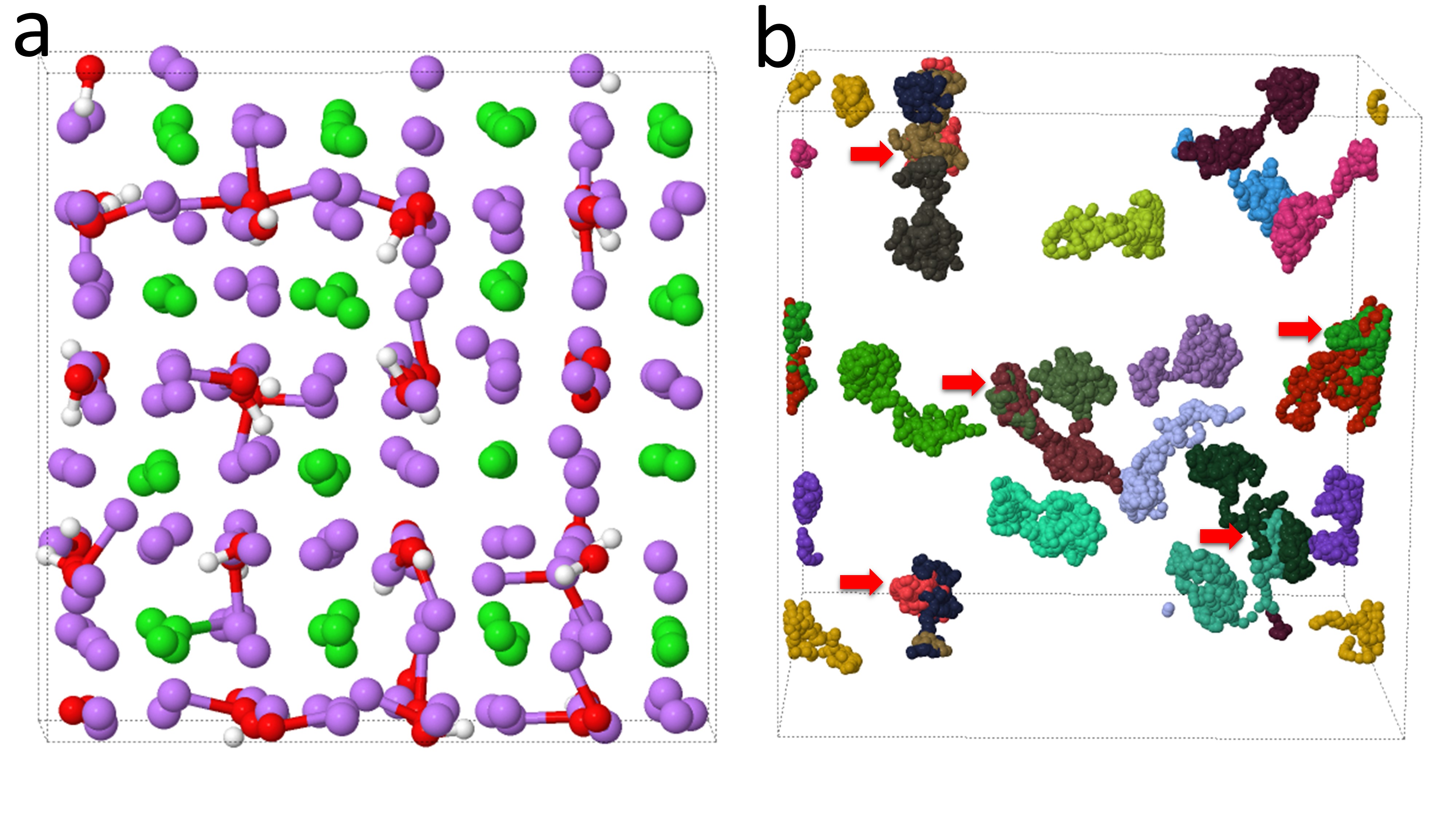