Oxygen reduction reaction (ORR) has frequently been employed to electrodeposit metal oxide thin films [1-4]. ORR can often be limited by mass transport of oxygen because of its low solubility in water. It is therefore important to precisely grasp bulk concentration of O2 and its diffusion in a wide temperature range. Optically transparent electrodes such as F-doped SnO2 (FTO) coated glass is often used as the substrate for the purpose of thin film characterization and device fabrication. So it is important to understand the kinetics of such electrodes for the ORR. In this study, we have carried out hydrodynamic electrochemical analysis employing rotating disk Pt and FTO electrodes (RDEs) to quantify each of these limiting factors.

Commercial Pt RDE or a home-made RDE setup employing an FTO (Asahi-DU, 10 Ω/sq.) was used as the working electrode. 0.1 M KCl aqueous solution (pH 5.6) was used as the electrolyte to which a mixture of Ar and O2 is bubbled through. The O2 concentration was separately measured with an Ebara DIO-1350 sensor, based on fluorescence quenching, while the temperature was controlled by a thermostat in a range between 298 and 353 K.

Care must be taken for the bulk concentration of O2 in real electrochemical experimental systems, because the gas phase in a closed cell should be equilibrated with water vapor under a total pressure of 1 atm, and salting out effect by the electrolyte also need to be taken into account. The actual O2 concentrations were measured in O2 saturated water and 0.1 M KCl between 298 and 353 K and compared with the values calculated from the handbook data as shown in Fig. 1. Both the plots are quite nicely overlapping with the respective curves. It is then safe to take CO2 (III) as the bulk O2 concentration for analysis of the electrochemical data measured in 0.1 M KCl. Diffusion coefficient (D) of O2 was precisely determined from Levich analysis of diffusion limited plateau current at Pt RDE. The curves measured at 298 K are chosen an example. The plateau current indicates diffusion limit (jD) of the ORR, and is proportional to ω0.5 (rad0.5 s-0.5), as expressed by the following Levich equation,

D was calculated as 1.92×10-5 cm2 s-1 for 298 K from the slope of Levich plot, which nicely compares with the literature value. The same analysis has been carried out for different temperatures. Arrhenius plot between D and 1/T gave a reasonable straight line to yield frequency factor Ad and activation energy Ea as 8.41×10-3 cm2 s-1 and 15.0 kJ mol-1, respectively. Having known the saturation concentration of O2 and the diffusion coefficient, O2 flux density can be precisely known for any given temperature, partial pressure and w.

Blend of Butler-Volmer equation and Levich equation yields Koutecky-Levich (K-L) equation to describe current in the mixed regime, namely, where current is controlled both by charge transfer kinetics and mass transport,

K-L plot, j-1 vs. ω-0.5, was drawn from the J-V curve to determine a jk value from the intercept with the ordinate for a given overpotential. Extrapolation of the linear fit of logjk vs. overpotential for E–Eeq=0 yields the standard charge transfer rate constant k0. Such analysis has been conducted for the Pt RDE over a wide range of temperature. A reasonably straight Arrhenius plot was obtained to indicate thermal activation of the charge transfer process with a frequency factor (Ak) of 9.82×102 cm2 s-1 and an activation energy of 53.2 kJ mol-1. The same analysis has been attempted with the FTO RDE. However, its electrode kinetics was highly unstable. Simply degreased FTO was poor for the ORR and was not able to reach the diffusion limit. Electrochemical activation resulted in a reasonable activity to allow determination of k0 as 1.82×10-7 cm s-1 at 343 K, which is found to be 2 orders smaller than that of Pt (2.16×10-5 cm s-1) at the same temperature. 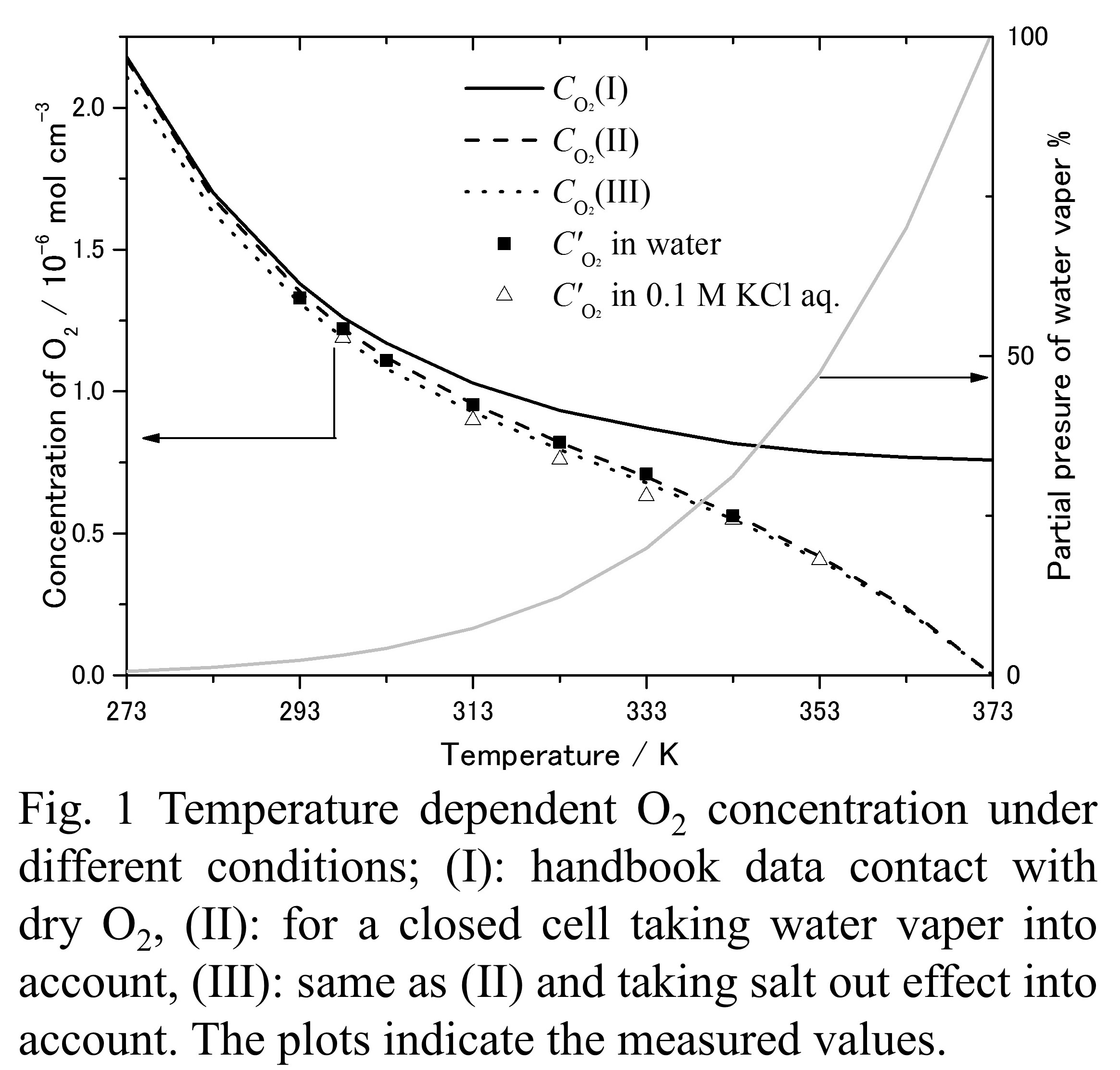