Maryland C (Gaylord National Resort and Convention Center)
M. Oya (GS Yuasa Corporation), W. Sueki (Osaka University), Y. Hayakawa, K. Takaba, and M. Fukui (Ritsumeikan University)
Due to their high energy density, lithium-ion rechargeable batteries have been increasingly used in various electronic devices as useful and efficient electric energy storages. On the other hand, it is well known that some critical states such as over-charge or over-discharge of a lithium-ion battery may lead to dangerous situations and may accelerate the aging of its capacity. it is thus necessary to accurately estimate the State-of-Charge (SOC) of the the batteries for safe and long lasting operations[1].

Recently, some SOC estimation methods employing the extended Kalman filtering (EKF) technique have been reported based on the state-space representation of an equivalent circuit model (Figure 1) [2]-[5]. One of the main difficulties in these model-based methods is that the physical parameters of the equivalent circuit change in time depending on the SOC and temperature of the battery. A typical approach to cope with this is to model a priorithe SOC- and temperature-dependences of these parameters from the measurements obtained from AC impedance experiments [4],[5]. This approach requires a lot of time to acquire the experimental data.

In this work, we take a different approach from the above previous works. We present a method for simultaneous estimation of the SOC and the equivalent circuit parameters by combining the EKF and the recursive least-squares (RLS) identification algorithm. The schematic diagram of the proposed method is illustrated in Figure 2. The advantages of the proposed method are as follows. The equivalent circuit parameters can be accurately estimated on-line by the RLS in various operating conditions without prior information nor preliminary experiments. The parameter estimation part of the proposed method is indenpendent from the nonlinear characteristics of the SOC dependence of the open circuit voltage (OCV).

The effectiveness of the proposed method is verified through a discharge experiment of a LiFeO4 battery with the nominal capacity 48.5Ah and the maximum voltage 3.5V. The SOC estimation of a LiFeO4 battery is difficult because its SOC-OCV characteristic curve is almost flat in the middle range of the SOC. The terminal voltage and current are measured at the sampling period 1sec. The input current is a quasi-random sequence whose power is concentrated in the frequency bands around 0.07Hz and 0.03Hz (Figure 3).

The RMS values of the SOC estimation errors are shown in Table1. It is seen from the table that the proposed method improves the estimation accuracy than the previous method due to Oya et al.[5].

The accuracy of the parameter estimates is assessed in terms of the Cole-Cole plots in Figure 4, where the x- and o-indications respectively denote the points at the Nyquist frequency 0.5Hz and the lowest frequency 0.08Hz measurable by our impedance analyzer. For both SOC=20% and 50%, in the operating frequency band lower around 0.08Hz, the estimates by the RLS (blue) are much closer to the measured values (red) than the previous method due to Oya et al.[5] (green). This is not the case for SOC=80%, which is because of the transient behavior of the RLS algorithm during the initial period of the discharge experiment.

From the above experimental results, we conclude the following as the main finding of this work. The RLS algorithm can provide a good estimation of the equivalent circuit model in the sense that the obtained parameter estimates well describe the battery behavior in the operating frequencies rather than all frequencies, and this fact accounts for the SOC estimation accuracy of the proposed combined RLS-EKF method. It may also be noted that the frequency domain analysis presented in this paper will be helpful in assessment or validations of various model-based SOC estimation algorithms. 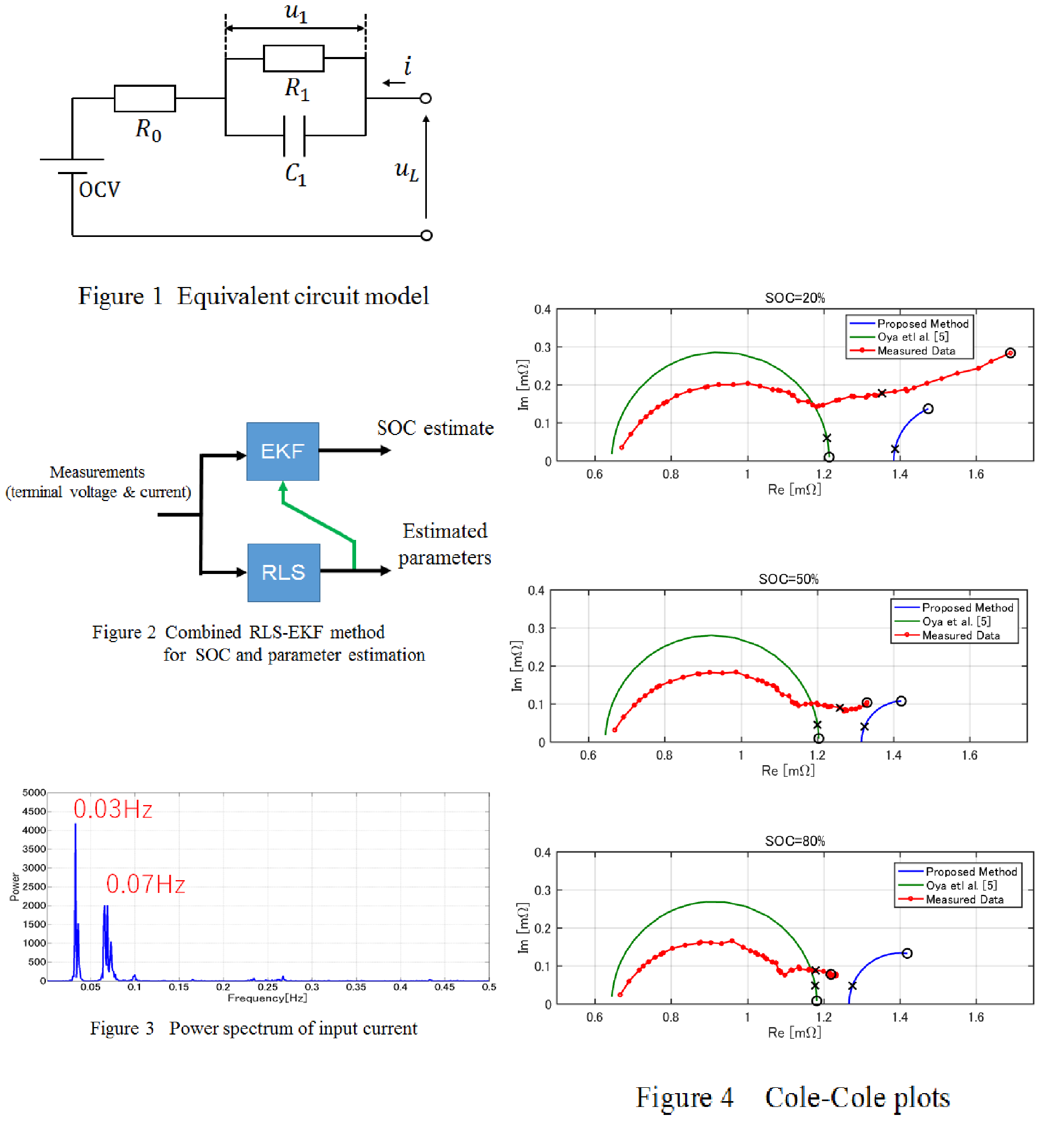