Maryland C (Gaylord National Resort and Convention Center)
G. Berckmans, J. Smekens (Vrije Universiteit Brussel - ETEC/MOBI), M. Marinaro (Zentrum für Sonnenenergie- und Wasserstoff-Forschung BW), P. Spurk, D. Nelis (Umicore AG & Co KG), G. Schmidt, J. Chauveau (ARKEMA), M. Wohlfahrt-Mehrens (ZSW), N. Omar, and J. Van Mierlo (Vrije Universiteit Brussel - ETEC/MOBI)
Lithium-ion batteries are the state of the art in electronic consumer products, ranging from smartphones to cars. Demands on lifetime and energy/power density are ever increasing to extend the duration the battery can be used. Hence, there is a continuous need to further improve lithium-ion batteries [1]. This is exactly what has been tackled in the European project FiveVB, which strives to increase the energy density of a battery as well as to perform a thorough study of the aging phenomena. One of these improvements in energy density can be achieved by using lithium-silicon alloys as negative electrode because of the high theoretical capacity of silicon (3.600 mAh/g) which is 10 times higher than the one of graphite, used in most lithium-ion batteries as negative electrode. The high theoretical capacity of Li-Si alloys has been known for a long time but their practical application has been prevented by serious issues associated with large volume expansion (>200%) during lithium uptake, that induce cracks and mechanical disintegration of the electrode, finally leading to losses of electronic contact and a severe capacity fading already after a number of cycles [2], [3]. This disadvantage has been investigated and improved by using a dedicated electrolyte as well as a special designed negative electrode.

Throughout the project an extended electrical characterization has been performed on silicon based non-commercial pouch cells. One important conclusion is that effect of mechanical pressure on this cell has a significant influence on its performance: mainly capacity retention (ultimately cycle life) and energy density. In this paper this influence will be discussed in detail by using classical electrical characterization tests such as an Open-Circuit Voltage test (OCV), a capacity test and Hybrid Pulse Power Characterization (HPPC) test complying with the existing standards. In this abstract only the capacity test will be discussed, the remaining tests will be discussed in the full paper.

The procedure used during the capacity test consists of standard charging phase (constant current and constant voltage) followed by several discharges at different C-rates (C/5, C/3, 1C & 1.5C), based upon the international standard IEC 62660-1. The current and its corresponding voltage response of a capacity test of the clamped Si-alloy pouch cells is visualized in figure 1. Figure 2 provides a comparison of the discharge capacity of both the clamped an unclamped pouch cells. It can be clearly seen that when clamping the cell a significant increase of 10-20% in the discharge capacity can be observed. The most probable root cause of this difference is due to gassing of the negative electrodes because after the electrical characterization tests it can be clearly observed that the unclamped pouch cells are swollen and the clamped ones show no signs of swelling. These gasses are not conductive resulting in regions of low conductivity which are not taking part anymore in the electrochemical reactions. The clamped cell shows no swelling which can be explained by two reasons: firstly, it is possible that due to the pressure of clamping the gassing is reduced or secondly that the gas is pushed to the side of the cell where it doesn’t interfere with the electrochemical reactions. Since no gassing is observed the firstly is more likely.

This project has received funding from the European Union’s Horizon 2020 research and innovation programme under grant agreement No 653531. Further, we acknowledge the support to our research team from “Flanders Make”. 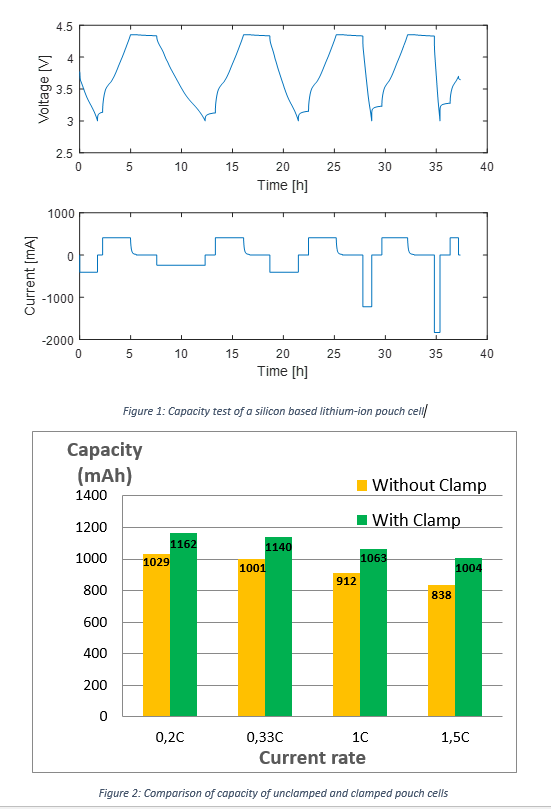