The ionomer distribution of the catalyst layer with I/C 2.0 was analyzed as shown in Figure 1. A catalyst coated membrane was fabricated by a doctor-blading and decal-transfer method [5]. Lower side in the figures is the interface with a polymer electrolyte membrane (PEM) and upper edge is the bottom in the fabrication process before decal-transferring. The through-plane ionomer distribution is not uniform. Thin ionomer layer was formed at the interface with the PEM. This can be because of deposition of ionomer during the drying process.

This work was supported by JSPS KAKENHI Grant Number 15H03932. 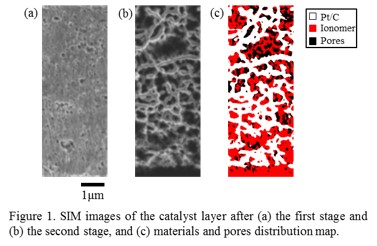