Resistive switching random access memory (ReRAM) has been expected to a next generation memory due to high-speed response, non-volatility, low power consumption [1]. However, poor reproducibility of a switching voltage hinders the practical application. According to a filament model, many kinds and number of filaments made at the soft breakdown of an insulator are thought to be the origin. In our previous studies, we employed anodic porous alumina (APA) with ordered nanoholes as the insulator of ReRAM because nanoholes are expected to inhibit the growth of conductive filaments spacially. In the result, we succeeded in suppression of the switching voltage variation [2].Looking at the top view of SEM image of APA (Fig. 1), we notice no restriction along the dashed lines. It means that there exist a division indicating a bulk property. In this study, a nanowire based insulator has been focused on to confine the filaments omnidirectionally.

Nickel nanowires were buried into nanoholes of APA using electroplating method, where nickel sulfate was used as an electrolyte solution. The exposed Ni nanowires were obtained by chemical etching the alumina layer. The nanowires were oxidized by oxygen plasma for 1, 3, 5 min. The surface morphology of nanowires was investigated by a field emission scanning electron microscope (FE-SEM). For a contact preparation, Indium solder was used against the top electrode. The bottom electrode was a residual aluminum substrate. The I-Vcharacteristics of NiO nanowires were measured by a standard two-probe method at room temperature, where the current was limited to 1 mA in a SET process guard the device from a complete dielectric breakdown.

Figure 2 (a) ~ (c) shows the cross-sectional SEM images of NiO nanowires. The typical diameter and the length were about 40 nm and 600 nm, respectively. Significant oxidation time dependence was not found in the shape. We can see clear switching behaviors for all samples. In case of 1 min oxidation, a relatively wide distribution of the switching voltage was measured. The distribution width became smaller in 3 min oxidation and widens again in 5 min oxidation. The relatively high current found in the RESET process in case of 3 min oxidation. It might be due to poor crystallinity of the NiO thin film because oxygen plasma is expected to make the film amorphous by the high kinetic energy of oxygen plasma. Longer oxidation time might help to formation of many filaments. So, this leads to widen the switching voltage distribution again in 5 min oxidation. 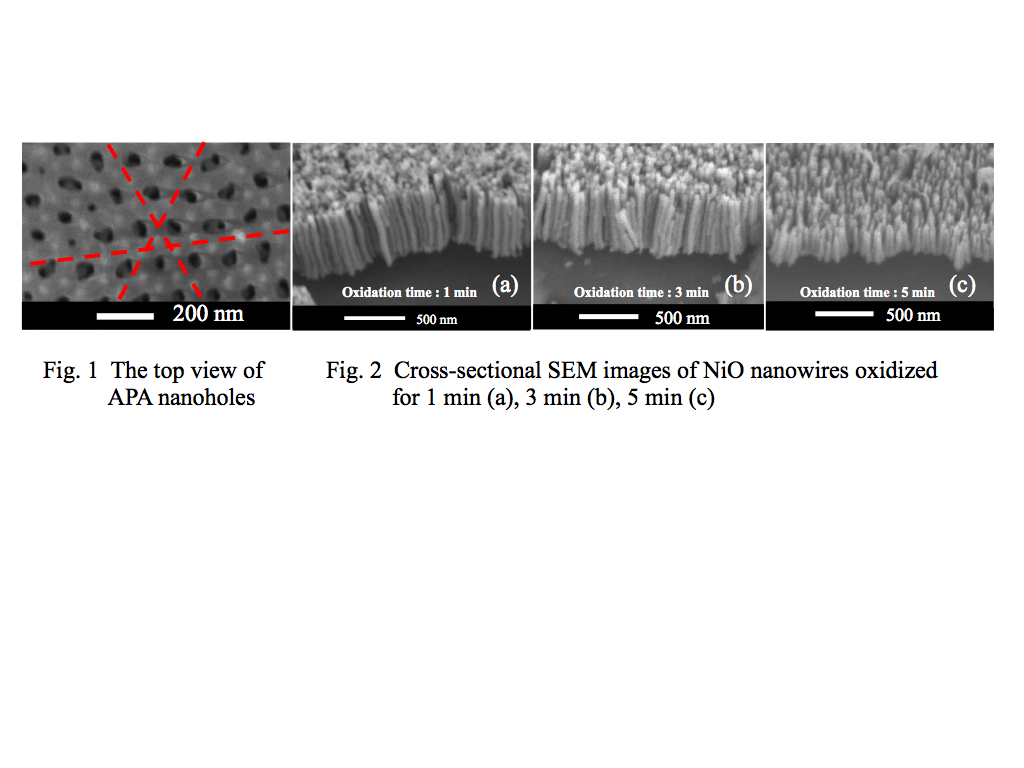