Maryland A (Gaylord National Resort and Convention Center)
Q. He, Y. Gorlin, M. U. M. Patel (Technical University of Munich), H. A. Gasteiger (Technical University of Munich, Chemistry department), and Y. C. Lu (The Chinese University of Hong Kong)
In the search for high energy density and inexpensive post Li-ion batteries, lithium-sulfur (Li-S) batteries have been intensively researched due to both their high theoretical capacity (~1675 mAh/gsulfur) and the natural abundance and non-toxicity of elemental sulfur [1-5]. However, the performance of Li-S batteries is strongly limited by capacity fading and low efficiency, owing to the loss of soluble active materials (elemental sulfur, polysulfides) into the electrolyte [1-2].

To address this issue, significant progress in electrode materials development to constrain the soluble species has been made in recent years [3]. However, the search and development for effective electrolytes has been impeded by the lack of understanding of how solvent properties affect the Li-S redox chemistry [1,2]. While several research groups have reported that high EPD (electron pair donor) solvents [4,5] or solvents with a low dielectric constant [6] would be beneficial for Li-S batteries, there is no systematic study on the correlations between the solvent properties and the sulfur-redox behaviors in Li-S battery.

In this study, we examined nine nonaqueous solvents which cover a wide range of three major solvent properties, viz.,in dielectric constant (ε), in Gutmann donor number (DN), and in acceptor number (AN) (s. Table 1) [7]. This enabled us to examine the influence of these three solvent characteristics on the lithium-sulfur chemistry using cyclic voltammetry and rotating ring disc electrode (RRDE) experiments.

Figure 1 shows the cyclic voltammograms (CVs) of S8 in six representative solvents (or mixture) including DMSO (dimethyl sulfoxide), DMA (N,N-dimethyacetamide), DOL (1,3-dioxolane), DME (1,2-dimethoxyethane), ACN (acetonitrile) and Diox (1,4-dioxane). In our analysis, we will focus on three major features of the CV: 1) the onset potential of S8-reduction; 2) the peak separation of the reduction peaks, and, 3) the number of the oxidation waves. We will correlate these CV features with the solvent properties (ε, DN, AN) and exploit UV/Vis spectroscopy to study the physical origins responsible for the differences in redox behavior [8-10]. In addition, we study the electrochemical behavior of these solvents in Li-S catholyte cells (with dissolved S8) as well as in conventional Li-S batteries (with solid electrodes). The key solvent properties that affect sulfur reduction activity, polysulfide stability, cell capacity, and voltage efficiency of the Li-S batteries will be discussed.

The authors would like to acknowledge funding of this work from the German Federal Ministry of Economy and Energy under agreement number 03ET6045D (“LiMo” project) and thanks Oliver Groeger for the fruitful discussion. 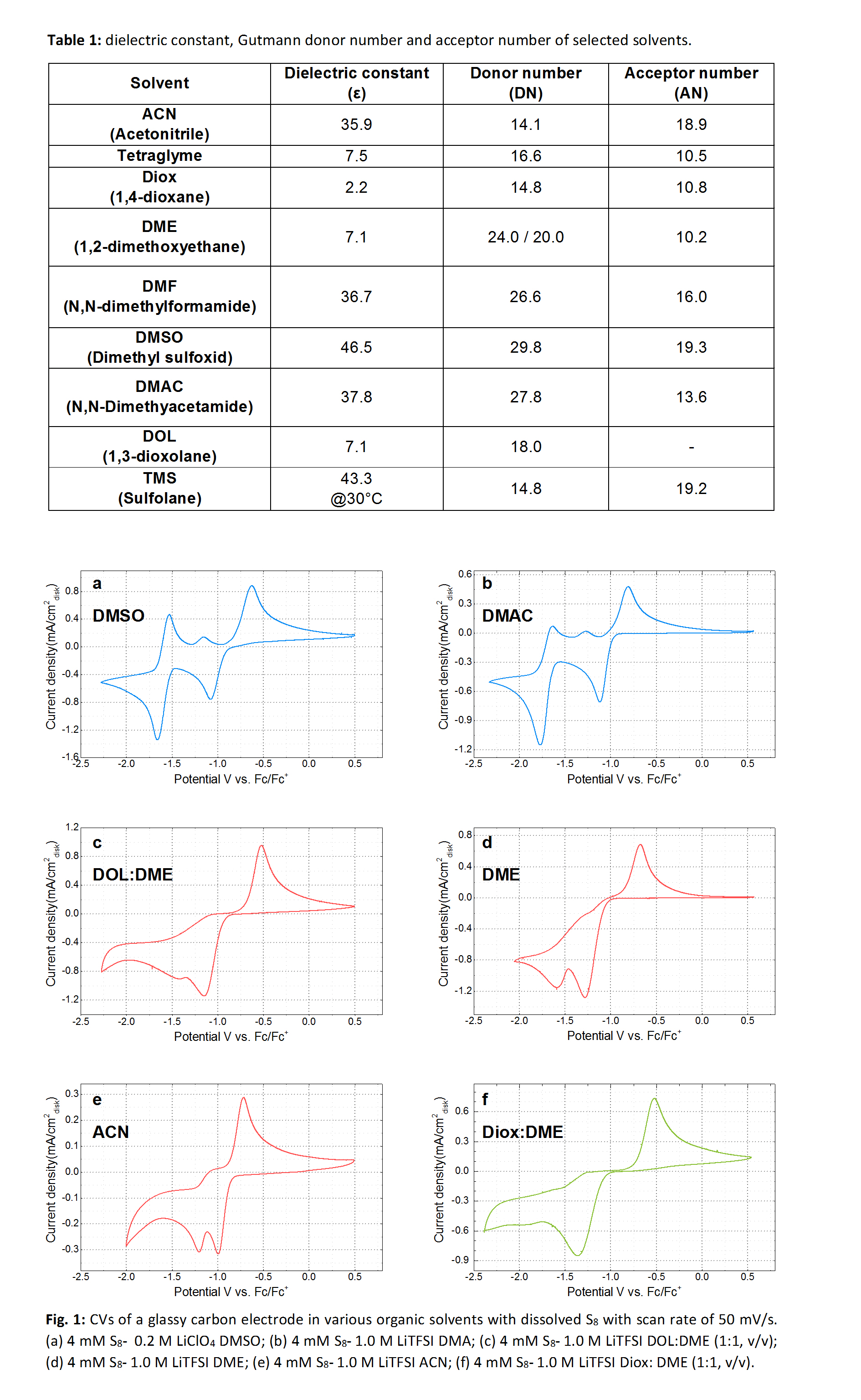