Use of electrolytes with low lithium polysulfide (Li2Sn) solubility limits has attracted considerable interest in recent literature.1 This “sparingly solvating” strategy has been adopted by some as a means for significantly reducing redox shuttling of Li2Sn between the cathode and anode. Interestingly, some sparingly solvating electrolyte compositions, employing significantly high concentrations of LiTFSI, have not only shown promising cycling performance, but have also shown a unique discharge voltage profile—lacking the typically observed two plateau response produced by sequential soluble long chain Li2Sn and short chain Li2Sn formation. This unique voltage profile is thought to be the result of significantly suppressed concentrations of longer chain Li2Sn (n > 4) leading to initial sulfur reduction through a solid state pathway followed by Li2Snreduction mediated by a low solubility intermediate.

What remains to be elucidated is a more quantitative assessment for the solubility regimes in which the alternative sulfur reduction pathway occurs. Furthermore, a deeper understanding of the electrolyte characteristics that dictate Li2Sn solubility is lacking. In this talk, a unique 23Na NMR-derived donor number (DN) scale is presented, similar to that described by Schmeisser et al.2 Evaluation of donicity in this manner allows for a direct comparison between electrolytes utilizing different solvating species; see Figure 1 for THF and acetonitrile (AcN)-based electrolytes. It will be demonstrated that the 23Na-DN assignments are predictive indicators for solubility of Li2Sn (Figure 2). Finally, it will be shown that solubility can be used to predict the thermodynamic redox potentials for Li-S cells as a function of discharge capacity. Figure 3 shows representative galvanostatic intermittent titration technique (GITT) experiments performed on two different AcNxLiTFSI electrolytes, with drastically different Li2Sn solubility limits; the black traces follow the open circuit potentials at given capacities. Clearly, AcN6LiTFSI shows a classic two plateau response, in which the second plateau (later discharge) is at a lower potential than the early discharge plateau—consistent with higher Li2Sn solubility. Alternatively, AcN2LiTFSI shows a mid-discharge plateau higher than that of the potential at early discharge—consistent with a mechanism driven by a lack of solution phase Li2Sn (n > 4) species. Further details describing how these voltage profiles change as a function of Li2Snsolubility will be provided. 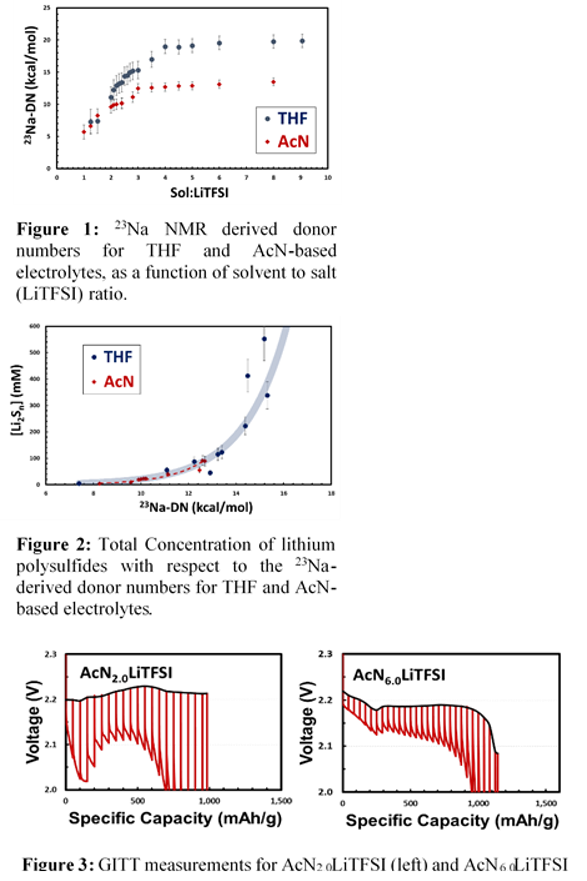