Chesapeake D (Gaylord National Resort and Convention Center)
T. Nakayama, Y. Asayama, and R. Nagasawa (Department of Physics, Chiba University)
Metal/insulator interfaces are essential structures in most of electronic and optical devices, and thus the stability of such interfaces is important for the reliability of devices. It has long been known that the metal atoms in a gate electrode often penetrate into insulators by thermal diffusion during the annealing processes in device fabrication. In addition, metal atoms are ionized and such diffusion is remarkably enhanced under electric fields during device operation. Diffusing metal atoms often produce defect electronic states, promote leakage currents, and cause serious damage in electronic devices, particularly in recent nanoscale devices such as metal nanodot memories. On the other hand, such diffusion behavior is positively utilized to produce metal nanowires in insulators for resistive switching memory applications. However, the microscopic understanding of ionization and diffusion of metal atoms has not been obtained yet. In this work, we employ the first-principles calculations and clarify how metal atoms are ionized and diffuse under electric fields around metal/insulator interfaces.

We consider metal/insulator interfaces made of a variety of metals (Al, Ag, Au, Pt, Ta, W, etc) and crystalline/amorphous SiO2. Electronic structures, ionic charges, and adiabatic diffusion potentials of metal atoms are evaluated using the first-principles calculations in the density functional theory. Electric field is applied perpendicular to the interface by supplying positive/negative electric charges to the interface-slab systems.

With respect to the ionization, we found that the ionic charge of metal atom in SiO2 changes depending on the distance from the interface [1]. In a 0-6Å region near the interface, the diffusing atom is sharply ionized with leaving the interface. This occurs owing to the breakdown of orbital hybridization between electronic states of metal atom and metal induced gap states (MIGS) of metal electrode [2,3]. When the substrate is changed to semiconducting Si and Sn, this region is extended to 10-15Å. Outside this MIGS-penetration region, on the other hand, the ionic charge of metal atom still varies. This variation occurs due to the electron transfers from diffusing metal atom to not only surrounding SiO2 but also metal electrode. In this way, we can conclude that the ionization of the metal atom first begins quantum mechanically in the MIGS-penetration region and then its ionization charge changes electromagnetically outside the MIGS-penetration region.

With respect to the diffusion under electric field, we found that the diffusion barrier linearly decreases with increasing the electric field. This result indicates that the electric field remarkably enhances the metal-atom penetration probability into SiO2, like an exponential function of electric field. Such enhancement works effectively for metal atoms with small electronegativity and mainly in the case of positive voltage application, which is in good agreement with observations. This is because most metal atoms prefer to ionized positively in insulators and small-negativity atoms have large ionic charges.

These results are discussed in details, together with reviewing recent experiments, comparing to the cases of metal/semiconductor interfaces, and focusing on the fundamental physics of ionization and diffusion. 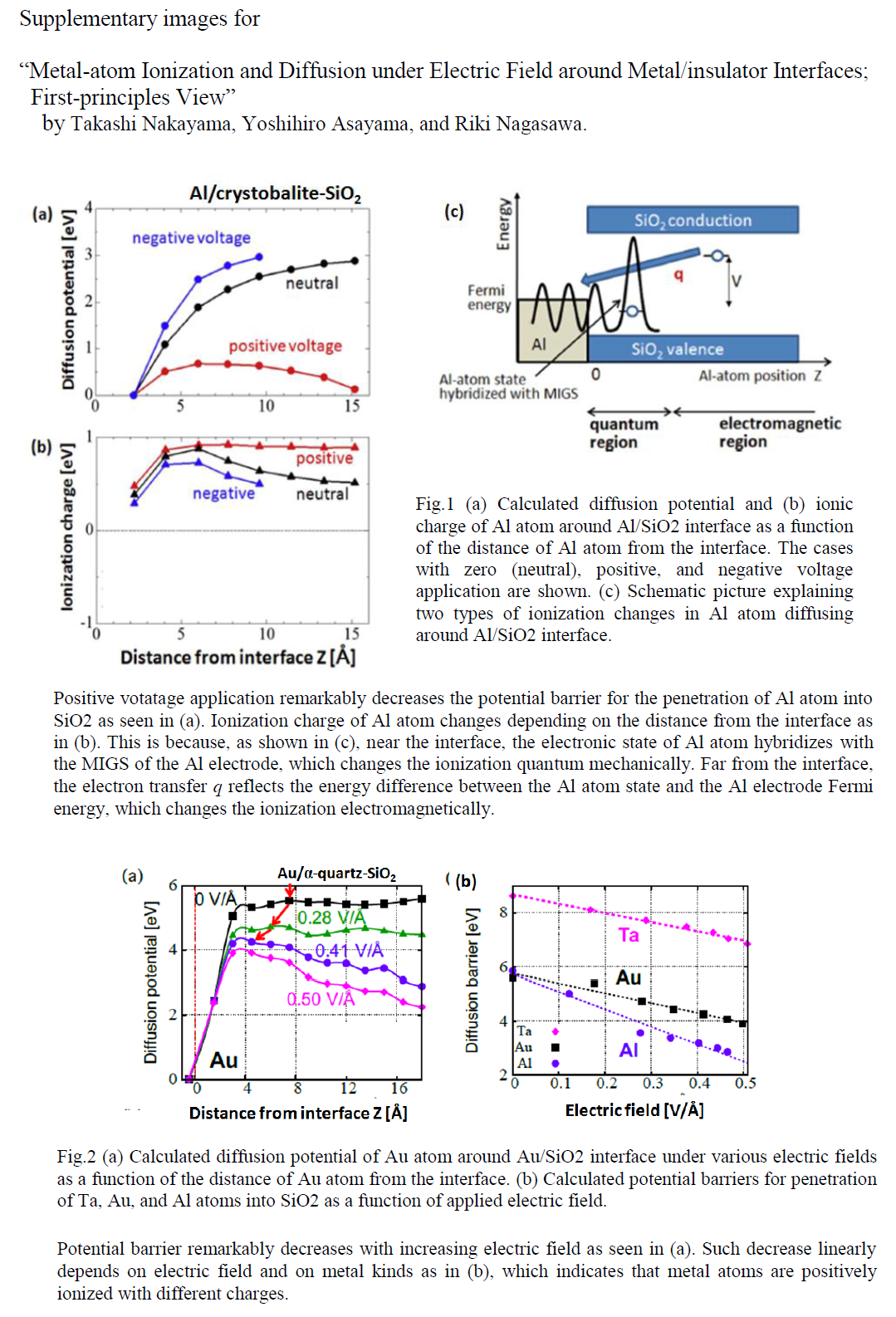