Chesapeake D (Gaylord National Resort and Convention Center)
K. Shiraishi, K. Sekiguchi, H. Shirakawa, K. Chokawa, M. Araidai (Nagoya University), Y. Kangawa, and K. Kakimoto (Kyuushu University)
The III-nitride semiconductors, GaN, AlN and InN, have direct bandgaps and the bandgaps of their alloys can cover a wide range. Therefore, they are widely used as materials for optical devices. Moreover, they have received considerable attention as materials for future high performance power devices [1,2]. To develop these devices, it is crucial to fabricate high-quality GaN crystals by epitaxial growth. For their epitaxial growth, metal organic vapor phase epitaxy (MOVPE) is generally used. In GaN, AlN and InN MOVPE, trimethylgallium (TMG), trimethylaluminum (TMA) and trimethylindium (TMI) are used for the group III sources, respectively. NH3 is used for the nitride source, and H2 and N2are used as carrier gases. In MOVPE, TMG, TMA and TMI should decompose into gas phase Ga, Al and In atoms, respectively. The chemical equation can be written as

There are many studies which have investigated their decomposition reactions[3,4]. However, the details have not been clarified and also many problems have been reported from experiments. In the case of GaN MOVPE, the gas phase reaction for the formation of the (CH3)2GaNH2 adduct has been reported [5,6], and these authors believe that GaN nanoparticles were formed from the (CH3)2GaNH2adduct in the gas phase reaction near the surface. On the other hand, it is also thought that Ga is incorporated as gas phase Ga atoms on the GaN growth surface and that these migrate along the surface [7,8]. 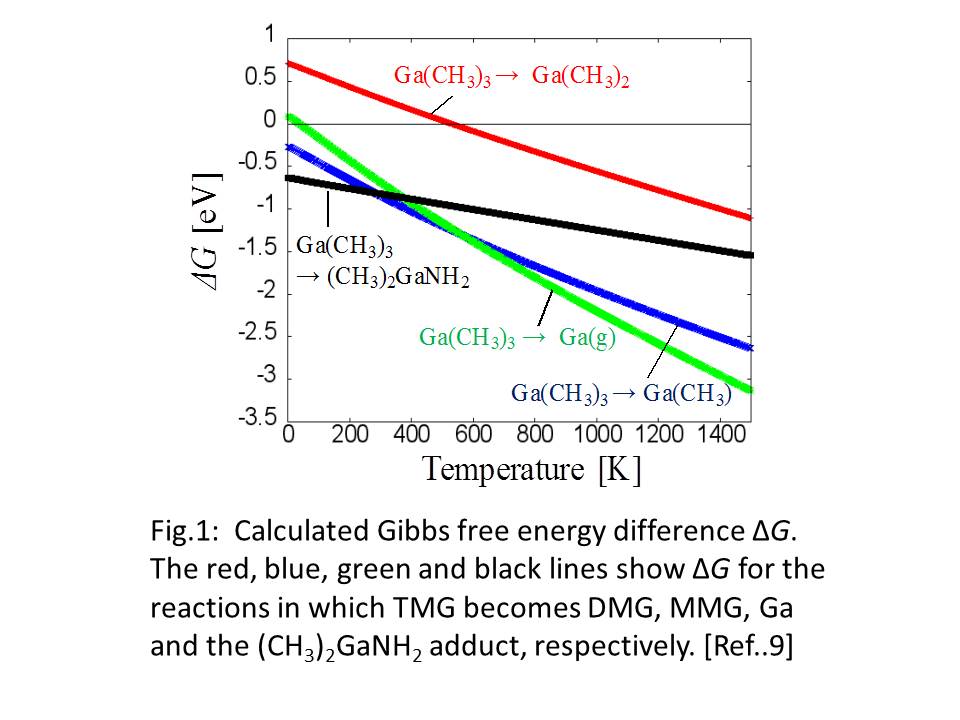