With their advantages clear, the choice of an NCM oxide is a tradeoff between transition metal ratios, relative capacities, relative stability, relative cost, and relative power capability. Fast charging/discharging is becoming more and more central to the practicality of electric vehicles; hence, knowledge of Li+ ion diffusion through the oxide structure is important. We investigated the influence of transition metal ratios on Li+ ion diffusion as a function of state of charge in NCM424, NCM523, NCM622, and NCM811 using the galvanostatic intermittent titration technique. An example for the NCM523 oxide is shown in Figure 1. We utilized synchrotron-based operando energy dispersive X-ray diffraction (EDXRD) to relate the Li+ ion diffusion coefficients to crystallographic evolution during the oxide delithiation-lithation process. We will describe these relationships during our presentation. Additionally, the diffusion coefficient values are related to the fast charging performance of the oxides to elucidate their importance to practical applications.

The electrodes and electrolytes are from Argonne’s Cell Analysis, Modeling and Prototyping (CAMP) Facility, which is supported within the core funding of the Applied Battery Research (ABR) for Transportation Program. We acknowledge the assistance of S. Trask, B. Polzin, A. Jansen, and D. Dees during the course of this work. Support from the U.S. Department of Energy’s Vehicle Technologies Program (DOE-VTP) is gratefully acknowledged. This document has been created by UChicago Argonne, LLC, Operator of Argonne National Laboratory (“Argonne”). Argonne, a U.S. Department of Energy Office of Science laboratory, is operated under Contract No. DE-AC02-06CH11357.

Diffusion coefficients in NCM523 oxide as a function of Li content using GITT. In order to account for the effect of duration of the polarization step, diffusion coefficients were estimated as the average of values calculated from the GITT formula using 300, 350, 400, 450, 500, 550, 600 seconds of the polarization step. Each curve contains the average data obtained from three separate cells. Error bars are three standard deviations resulting from the averaging of three cells. Note that the scatter (standard deviation) on averaging three separate cells is generally greater than the scatter from averaging the various time intervals selected. Square symbols indicate charging while circle symbols indicate discharge. 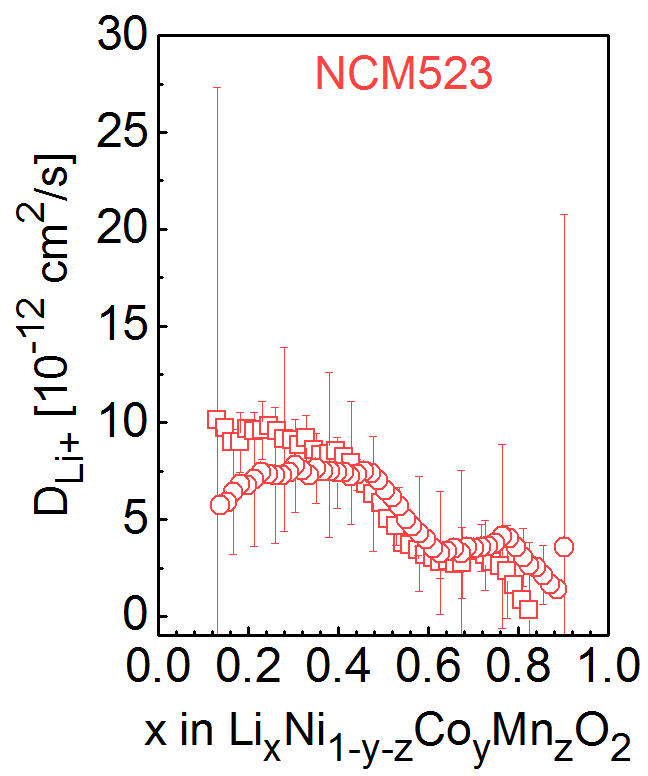