In the last decade, lithium-rich transition-metal oxides with a monoclinic layered structure have drawn much attention as a cathode of the lithium-ion battery. Among the oxides, Li1.2Mn0.6Ni0.2O2 (LMN) can be regarded as one of promising candidates due to lower cost and environmental load. According to previous works, a synthetic process has much influence on electrochemical properties of LMN and this situation makes the commercial use difficult. In order to uncover an origin of the synthetic-condition effect, it seems that an atomic configuration of LMN must be investigated in detail. As is well known, the Rietveld refinement using the Bragg profile is a typical analytical method, but this technique permits us only to discuss an average structure with periodicity even though a local chemical ordering such as LiMn6cluster is believed to play an important role in a delithiation/lithiation process.

In this work, the local chemical orderings of LMN prepared with different synthetic conditions were investigated by the pair distribution function (PDF) analysis, which enables us to discuss longer-range atomic correlation easily than other techniques such as NMR and EXAFS. On the basis of the obtained atomic configurations, an effect of the synthetic condition on the local ordering is discussed.

Li1.2Mn0.6Ni0.2O2was prepared by a co-precipitation method where two kinds of the cooling condition were applied: quenching and slow cooling. The products were characterized by means of X-ray diffraction (XRD) and inductively coupled plasma (ICP) measurements. The average atomic structures (the crystal structures) were refined by the Rietveld method using neutron (SPICA, J-PARC) and synchrotron X-ray (BL02B2 or BL19B2, SPring-8) diffraction patterns. A super cell with 1800 atoms was constructed from the unit cell, and then was used in the Monte Carlo simulation with experimental data, i. e., the reverse Monte Carlo (RMC) modeling. In the modeling, we used simultaneously the Bragg profile, neutron and X-ray structure factors which were obtained by NOVA (J-PARC) and BL04B2 (SPring-8), respectively. We also utilized an inverse Fourier transform of neutron structure factor, which is PDF. The RMC modeling was carried out with the RMCProfile program under the bond-valence-sum (BVS) constraint.

It was confirmed from XRD and ICP measurements that both the Li1.2Mn0.6Ni0.2O2 had a single phase of the Li2MnO3-type layered structure (S. G.: C2/m) and the analytical metal compositions were almost equal to the nominal value. The Rietveld analysis suggests that a distortion around a Li site is lower in the quenched sample than the other. Such a result is well consistent with the better charge/discharge property of the quenched sample.

By using the unit cell refined by the Rietveld analysis, we constructed a super cell and then optimized the atomic configurations on the basis of the RMC algorithm. In the process, neutron and X-ray structure factors were convolved, taking the cell size into account. As an example, Fig. 1 shows neutron D(r) of Li1.2Mn0.6Ni0.2O2 to which the slow cooling process was applied. The obtained atomic configuration snapshot indicates that Li in the transition-metal layer tends to be surrounded by Mn, and Ni at the lithium layer prefer to form a Ni-O domain in the crystal. An effect of the synthetic condition will be discussed. 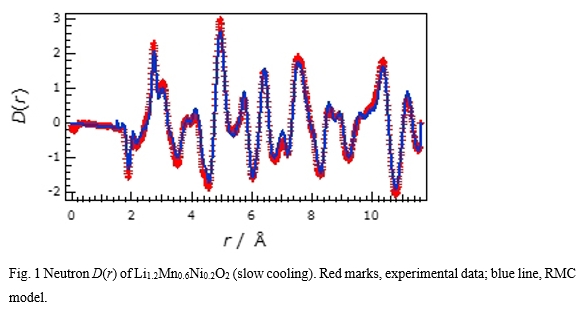