Devices
We compare the hysteresis widths measured at the gates of MoS2 based FET devices at different sweep frequencies. Additionally, we study the drifts of the threshold voltage on these devices in a systematic way by evaluating the threshold voltage shifts observed after stressing the devices for different time spans and stress voltages. From the wide range of samples available, we choose devices using a thermal SiO2 layer as a back-gate dielectric. The MoS2 is either exposed to the ambient or covered by an amorphous Al2O3 layer. This thin dielectric layer enables a top gate contact and is at the same time necessary to prevent any degradation of the device characteristics due to the impact of the ambient [4,8].


Degradation Modeling
For simulating the transfer characteristics we use a TCAD device simulator solving the drift-diffusion equations [10]. This approach is valid for devices with large dimensions and a large number of scattering centers, even if 2D channel materials are used [11]. The impact of interface defects is considered by using the standard SRH model. The transient charging and discharging of oxide defects leading to the hysteresis and the long-term drifts of the threshold voltage are described using the four-state NMP model [12,13]. The physical defect properties determining the degradation, such as trap positions and energy levels, depend on the respective oxide and have been studied in detail for SiO2 [8,14] and Al2O3 [9].


Results
In accordance with our previous experimental work [7], we argue here that the common cause for the hysteresis in the ID(VG) and the observed long-term drifts are charge capture and emission events in the surrounding dielectrics. Even though several groups claim that the hysteresis is due to charge trapping at the interface [6,15,16], we argue here that interface traps can only impact the threshold voltage via a change in the sub-threshold slope. An observed hysteresis provides information about fast-switching oxide traps, while the systematic stress measurements reveal details about slow-switching oxide traps. One important quantity, necessary for understanding the size of the observed threshold voltage shifts, is the band alignment of the defect bands in the dielectrics with respect to the band edges of the semiconductors, illustrated in Fig. 1.


Conclusions
We use a drift-diffusion based simulation methodology to describe the cause of the threshold voltage drifts observed in the ID(VG) characteristics of MoS2 FETs, namely the charge capture and emission processes in the gate oxide traps. Thus, it is of utmost importance not only to investigate the fabrication of 2D layers, but also to focus on the quality and the defect bands of amorphous dielectrics to enable further progress in the area of FETs based on 2D materials.

Fig. 1: Band alignment of defect bands in Al2O3 and SiO2. 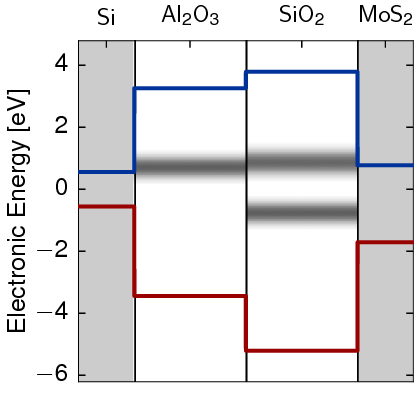