While the effects of manganese (Mn) dissolution from transition metal oxides have been documented, the fundamental physics of how manganese ions induce capacity fade are not yet determined. Delacourt et al. contend that Mn0 is deposited in the solid-electrolyte interphase (SEI) at the negative electrode creating an electronically conductive SEI, while Vissers et al. show that Mn2+ ion-exchanges with lithium-containing inorganic electrolyte reduction products1,2. Lastly, Wandt et al. demonstrated via operando X-ray absorption spectroscopy that Mn ions are always in the +2 oxidation state on lithiated and delithiated graphite, however Mn metal was detected on lithiated graphite in ex situ analysis3. This disagreement on the redox state of dissolved manganese impedes efforts to prevent SEI contamination by the transition metal ions. Even the standard reduction potential of Mn2+ to Mn0 in nonaqueous electrolyte is not agreed upon. Komaba et al. reported 1.87 V vs. Li/Li+, based on the standard redox potential vs. NHE in an aqueous environment4. Several studies have observed different reduction potentials for Mn2+ ions in both perchlorate- and carbonate-based electrolytes5,6. To better diagnose the redox state of manganese in a nonaqueous battery electrolyte, a fundamental understanding of the potential ranges for various oxidation states of manganese is necessary.

In one part of this work, we determine the Mn2+/Mn0 redox potential in nonaqueous electrolyte via three-electrode cell electrochemistry, energy dispersive X-ray spectroscopy (EDS), and X-ray photoelectron spectroscopy (XPS). To our knowledge, this is the first attempt to determine the precise redox potential for the Mn2+/Mn0 reaction in nonaqueous battery electrolytes. It is important to avoid electrolyte and lithium-ion reduction potentials obfuscating the reduction potential of Mn2+; therefore, a stable non-passivating, lithium-free electrolyte is used for this study (namely, 0.1 M tetrabutylammonium perchlorate in tetrahydrofuran). We vary the potential applied at a copper electrode in a manganese-doped electrolyte, correlate the current response to manganese reduction, and then confirm Mn0 deposition via EDS and XPS of the copper electrode. We have demonstrated that Mn0 can be electrochemically deposited on copper foil from a Mn-doped electrolyte and detected via EDS and XPS.

In another part of this work, we determine how the presence of manganese affects the formation and characteristics of the SEI using redox mediators, such as the ferrocene-ferrocenium couple. SEI films are formed both in the presence and absence of manganese salts, by applying a constant potential for a specified amount of time. The SEI is probed by adding a redox mediator to the electrolyte, and measuring the current response around the mediator reaction potential. By comparing the cyclic voltammograms for SEIs formed in neat electrolyte versus Mn-contaminated electrolyte, the impact of manganese on through-film mass transport and reaction kinetics has been determined. Results show that the SEI formed in the presence of manganese has an effective through-film ferrocenium diffusivity eight times greater than the SEI formed in neat electrolyte, indicating that manganese may induce higher porosity or cracks. Future work will tune redox mediator size and chemistry to characterize pore or crack sizes in the SEI. 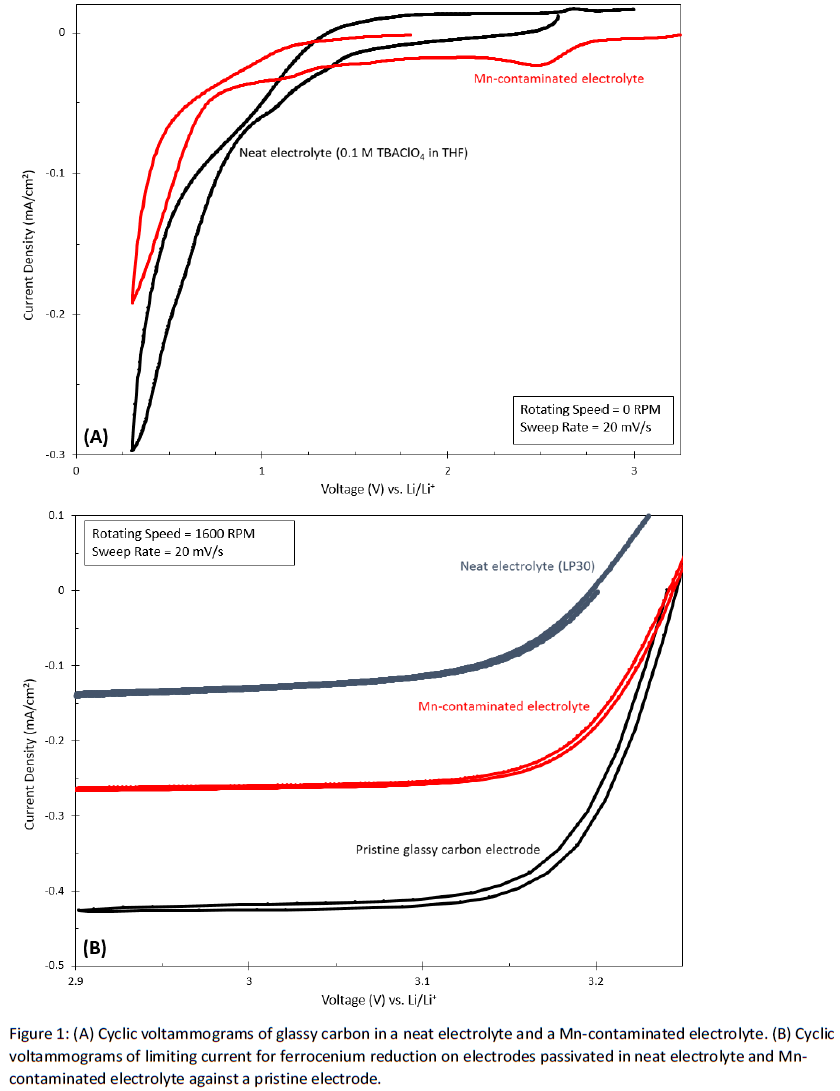