Prince George's Exhibit Hall D/E (Gaylord National Resort and Convention Center)
K. Ishikawa, Y. Ito, S. Harada, M. Tagawa, and T. Ujihara (Nagoya University)
Li metal anode is the most attractive material for rechargeable batteries due to its high capacity of 3860 mAh/g and lowest electrochemical potential among metals. However, short-circuiting owing to non-uniform deposition (dendrites) has plagued Li metal anodes with short cycle life and associated safety issues. To address these issues, a number of methods such as additives in electrolyte and artificial protection layer have been proposed, but sufficient control of Li morphology has not been achieved. The morphology of electrodeposit metal is known to be highly dependent on the crystal orientation of the electrodes [1]. Recently, Mitsuhashi et al. have also reported that the morphology of electrodeposited Zn depends on the crystal orientation of the substrates and a substrate with (0001) orientation is likely to initiate non-uniform deposition [2]. Such morphological variations are attributed to the orientation dependence of charge transfer and the surface diffusion kinetics of the depositing metal. In an analogous way, the initiation of Li dendrites can also be influenced by the crystal orientation of current collectors. However, few studies have approached the dendrite problem from this perspective. In the present study, we investigated the morphology of Li electrodeposition on single crystal Cu collectors compared to on a polycrystalline Cu collector. In addition, a numerical analysis of the initial stage of Li electrodeposition under galvanostatic conditions was conducted to elucidate the mechanism for the morphological variation.

The electrodeposition of Li for different Cu current collectors was evaluated by using a three-pole cell. The working electrode is polycrystalline Cu (poly-Cu) and single crystal Cu (single-Cu) of (111) orientation. Prior to experiments, crystal orientation of Cu collectors was analyzed by using electron backscatter diffraction (EBSD). An electrolyte used for experiments is consisted of 1 M LiPF6 in a mixture of ethylene carbonate (EC) and methyl ethyl carbonate (MEC) with a 5:5 weight ratio. Li was deposited at a current density of 0.5 mA/cm2 and a charge capacity of 0.1 mA/cm2. 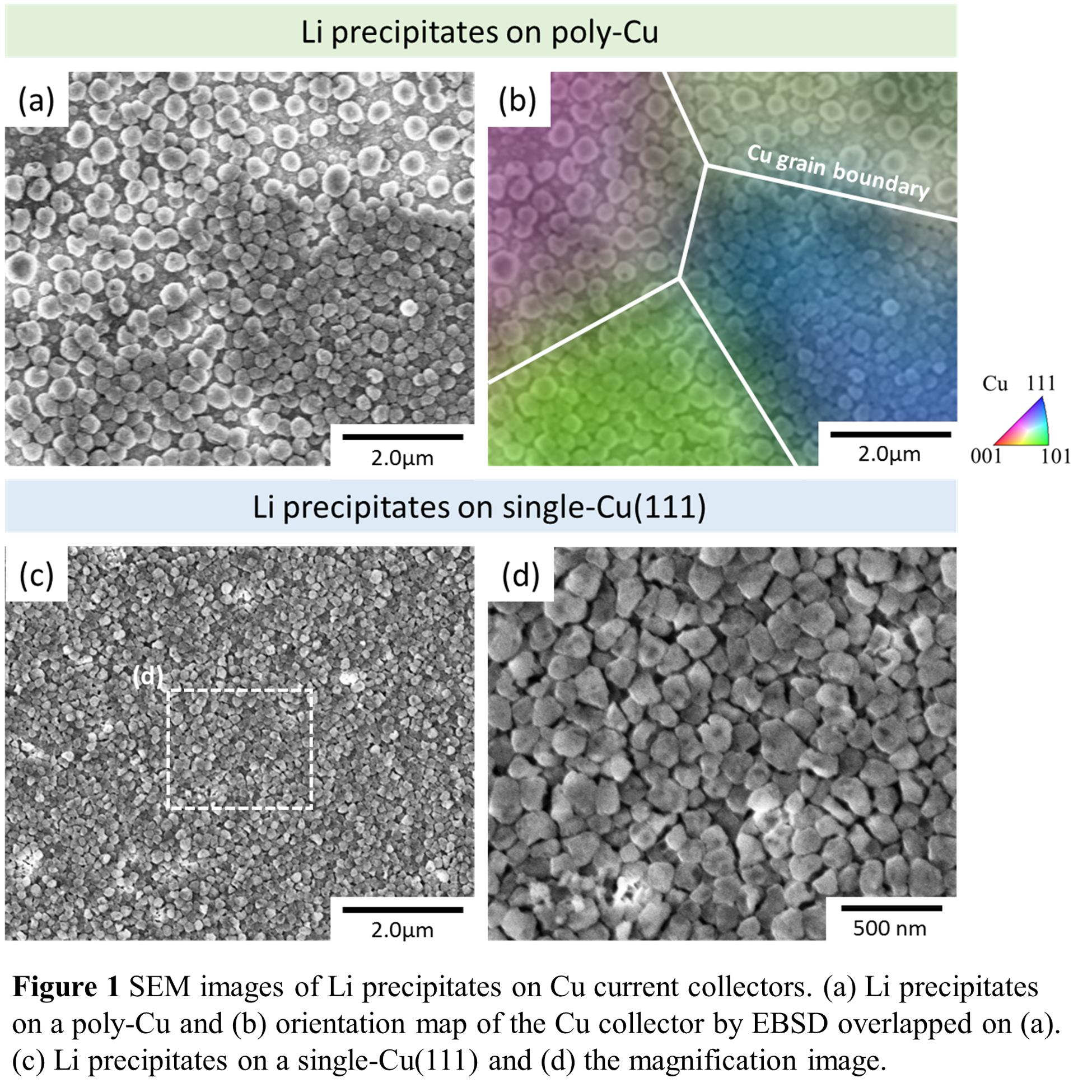