It is reported that nearly 15 terawatt of energy has been wasted as low temperature heat [1, 2] per year. Thus, conversion of heat into electricity so called thermoelectric (TE) conversion has become an important technology. Typical approach for the TE conversion is to utilize the Seebeck effect that enables the temperature gradient into the carrier movement, resulting in the generation of the electricity. TE efficiency of the materials is usually characterized by the figure of merit (ZT) given by the equation (1)

in which σ, S, κ, T is electrical conductivity, Seebeck coefficient, thermal conductivity and temperature, respectively. To achieve a high ZT value, the material having high σ and S, low κ is desired. Up to date, inorganic semiconducting materials such as Bi2Te3 are used as the thermoelectric materials because of their high ZT value (ZT>1) [3]. However, these materials have problems such as toxicity, high cost and low processability, which prevent these materials from the practical use.

In this background, recently, single-walled carbon nanotubes (SWNTs) have attracted strong attention due to the extremely high electron conductivity as well as their non-toxicity, light weight, mechanical toughness, flexibility and low cost, all of which are advantageous as the thermoelectric device. However, it is well known that SWNTs are produced as a mixture of metallic (m-) and semiconducting (s-) SWNTs. s-SWNT was proved to have large S theoretically and experimentally [4, 5], however, the contamination of m-SWNT decreased the S. So far, s-SWNTs were obtained either by wrapping s-SWNT with polymer such as PFO [4] or surfactant such as SDS [5], both of which were insulators and hard to remove from s-SWNTs, which led to lower σ of s-SWNTs. Previously, our group reported that Flavin compound (dmc12) can extract s-SWNTs from SWNT mixture [6]. Since dmc12 is a low-molecular-weight compound which is highly soluble in organic solvent such as chloroform and methylene chloride, it can be easily removed from s-SWNTs. This extraction method gave us an opportunity to characterize the real TE properties of s-SWNTs. In this work, we are going to use dmc12 for s-SWNTs extraction and then fabricate s-SWNT sheet by filtration. σ, S and κ of the sheet will be characterized to calculate ZT.

Fig. 1 showed the UV-vis spectra of the supernatant before (black line) and after extraction (red line). Before extraction, SWNT showed broad peaks with both m- and s-SWNTs and after extraction a huge suppression of m-SWNT peak, which was in 600~900 nm was observed, proving that the supernatant was mainly s-SWNTs. As shown in Fig. 2, high efficiency of the s-SWNTs extraction using dmc12 enabled us to prepare the free-standing sheet, which allowed us to measure the σ, S and κ of the s-SWNT sheet. The thermoelectric properties of the sheet will be discussed in the poster. 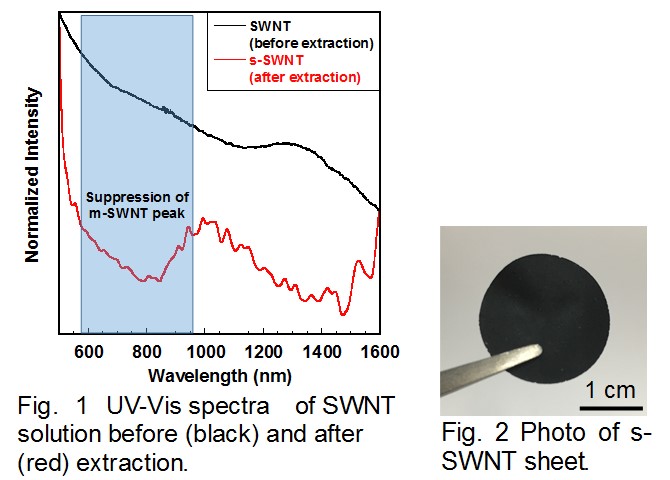