1663
AEM Electrolysis Progress and Impact on the Cost of Hydrogen

Alkaline exchange membrane (AEM)-based electrolysis is therefore viewed as a potential replacement to the current PEM systems as a means of driving down the high capital cost. This cost reduction is accomplished by replacing the typical high cost catalyst and materials of cell construction with lower cost metals that would corrode in the acidic PEM environments, but are stable in the alkaline chemistries. In theory, this approach is highly promising, but testing of the current state-of the art has shown the technology gaps between the two platforms in terms of stability, durability, and operating electrical efficiency. Modeling has shown that savings realized in capital cost are typically off-set by an increase in operating expense resulting from the lower activity of the non-PGM catalysts and poor conductivity of the AEM. Additionally, thermal instability of the AEMs require stacks to be operated at lower temperatures than a typical PEM system, impacting conductivity further and slowing kinetics.

The addition of liquid electrolyte to the water feed has been shown by some groups to be effective in reducing cell operating potentials and providing overall voltage stability. However, this solution adds management and additional maintenance of handling the caustics typically used. Efforts at Proton have shown significant improvements in operation under milder conditions, showing some potential to achieve targets required to compete with incumbent technology. In this talk, some of the advancements achieved and how these have impacted the cost of the hydrogen will be discussed. An example of this improvement is shown in the figure below, where collaborative ionomer research and partnering with a commercial entity for scale-up of catalyst synthesis have translated into an immediate improvement over targets previously established. Additionally, cost models will be compared to show the path needed to establish equivalence with current PEM systems and what is required to go beyond. 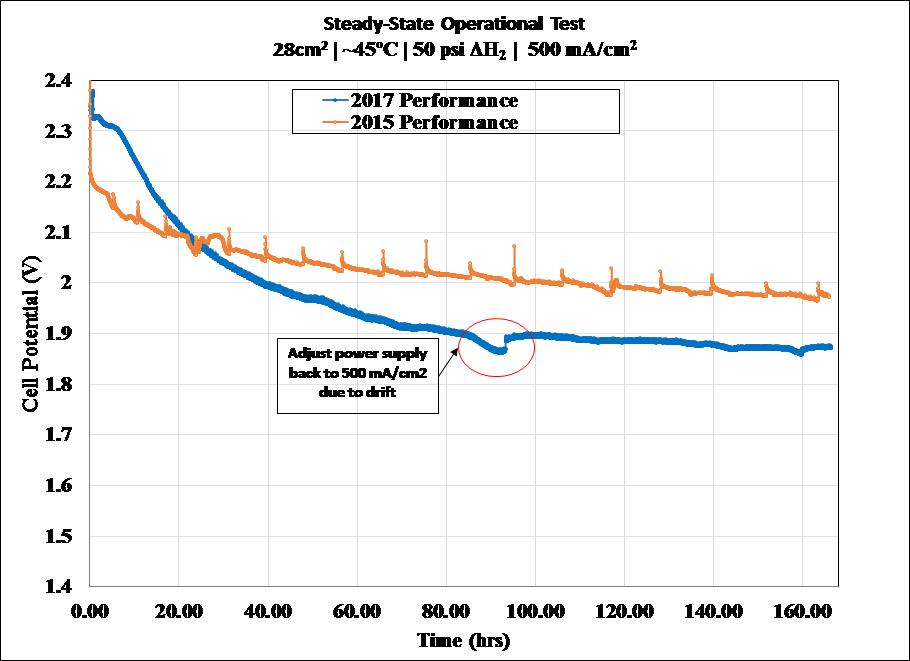