Maryland D (Gaylord National Resort and Convention Center)
C. Zhang, Y. Wang, X. Zhou (University of Miami), A. N. Mansour, G. H. Waller (Naval Surface Warfare Center, Carderock Division), and C. Martin (Navy Surface Warfare Center at Carderock)
One of the effective approaches to increase the specific energy of a supercapacitor while maintaining a high specific power is to dissolve active redox species, mediators into the liquid[i],[ii],[iii],[iv] and solid-state[v],[vi],[vii],4 electrolytes in porous electrodes., Because the mediators are completely dispersed into the ion conducting electrolytes at the molecular level, the utilization rate of the active materials can be maximized. In order to further improve the specific energy of the mediator supercapacitor, redox species that receive/give off multiple electrons in a redox reaction were synthesized and used. It has been proven that the specific energy of a supercapacitor is limited by the ion depletion in the electrolyte during charging. In order to minimize the problem, we use so-called “complimentary” mediators in the positive and negative electrodes. In other words, a mediator that releases positive ions is used for the positive electrode and a mediator that releases negative ions is used for the negative electrode. For example, redox mediators in the form KMFe(CN)6 (M: Y, La, Ce, Pr, or Ho) are used in the positive electrode while VOSO4 is used in the negative electrode. Using rare earth metal based mediators, we improved the specific energy by 60% relative to that of our first generation supercapacitor while maintaining the high specific power. Typical cyclic voltammetry curves for supercapacitors with cathode containing KLaFe(CN)6 or K4Fe(CN)6 mediator and anode containing VOSO4 mediator in comparison with that for an active carbon based supercapacitor are shown in Figure 1. The mediator supercapacitor with the rare-earth mediator exhibited higher specific energy (˃40 Wh/kg) relative to the K4Fe(CN)6 mediator, high charge/discharge efficiency (˃99%) and high reversibility (capacity retention ˃ 90% after 10000 cycles). The specific energy is above the theoretical limit that is anticipated for EDLCs (~15 Wh/kg), which corresponds to depletion of ions in the electrolyte.[viii]

As the mediators were synthesized in-house, XPS, XRD, and SEM are used to insure the oxidation states and phase purity and reveal the morphology of the mediators. In Figure 2, the Fe 2p XPS spectra for the mediators are similar regardless of the rare-earth element being used. With the Fe 2p3/2binding energy at ~709, Fe is present with an oxidation state of 2+ as one would expect in this type of material. The spectra for the rare-earth elements Y, La, Ce, and Pr (not shown) are consistent with all being present with an oxidation state of 3+. In the case of Ho, we anticipate the oxidization state to be 3+ but it was difficult to confirm due to lack of reference data. The C 1s spectra (not shown) are dominated by a contribution with binding energy near ~285 eV that corresponds to CN and hydrocarbon chemistries and a minor component with binding energy near 289 eV that corresponds to more oxidized carbon species. The XPS spectra of the N1s region are dominated by a major component with binding energy at 398.0 eV that corresponds to the CN chemistry and a minor component with binding energy near ~402 eV which could be attributed to NOx type of species. Additional ex situ and in situ structural characterization after polarization at different states of charge will be used to correlate with performance characteristics in order to explore the critical factors controlling energy, power, and capacity retention. 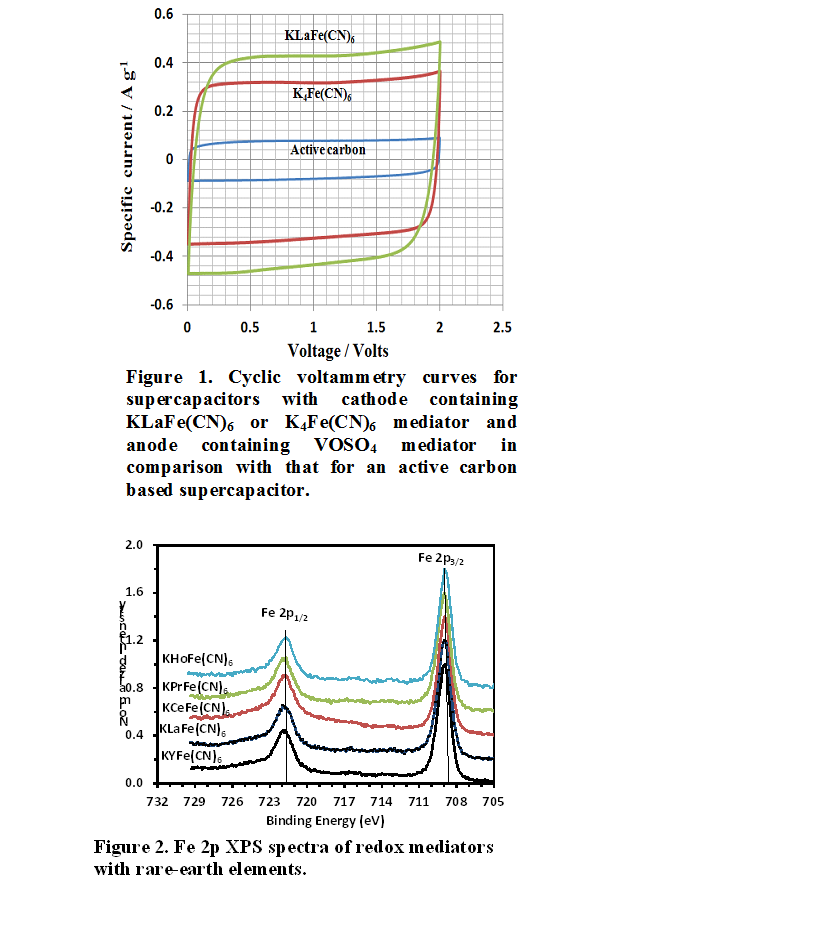