National Harbor 14 (Gaylord National Resort and Convention Center)
E. L. Redmond (W. L. Gore & Associates, Inc.), S. Wriston (Electrochemical Products, W. L. Gore & Associates, Inc.), and J. L. Szarka III (Statistics, W. L. Gore & Associates, Inc.)
Mobile radical scavengers, such as cerium, are exchanged with protons to improve chemical durability of membranes1. The trade-off with increasing cation concentration is a decrease in performance2–4. The performance loss in the Ohmic region is not fully accounted for by the change in the high frequency resistance. As cerium migrates to the cathode under load, a steep pH gradient develops across the cell and more overpotential is required to drive the reaction3,4. Cerium gradients add further dimension to the trade-off between proton and oxygen transport in the catalyst layer. Understanding the relationship between mobile additives in the membrane and critical electrode factors is important for enabling cost-effective and long-lasting fuel cell systems. This work investigates performance impacts due to the interaction between electrode variables and cerium additive in the membrane.

All electrodes were made with Pt/C catalysts and 25 cm2geo active area. The cathode loading of 0.2 mgPt/cm2geo was held constant. The effect of the electrode ionomer side chain structure, long side chain (LSC) vs short side chain (SSC), was tested. Low and high ionomer to carbon black (I:CB) ratios were used with average volumetric acid contents of 217 µeq/cm3 and 349 µeq/cm3, respectively. A 15 µm, 800 EW, ePTFE-reinforced baseline membrane construction was used. Cerium was added to the membranes with site exchange levels of 0, 6.5, or 13 eq%. The same anode, 0.1 mgPt/cm2geo, was used for all membrane electrode assemblies (MEAs). Two measurements were taken for each combination. The samples were tested using co-flow, triple-serpentine flow fields. H2-air performance tests were recorded using stoichiometric ratios of 1.3 and 2.0 at 4 different cell temperatures and inlet RH conditions5. Electrode diagnostics were measured under wet and very dry conditions. Performance in pure O2and 21% Helox was also investigated in wet and very dry conditions. Key points from the polarization curves were fit to a linear least squares regression model with interaction effects. The significance of each factor on the response is reported as a LogWorth statistic. Figure 1 summarizes the significant factors governing the Ohmic response for 3 different RH conditions.

Performance is most sensitive to the I:CB across all regions of the polarization curve for all RH conditions tested. Low I:CB results in worse performance compared to high I:CB. The I:CB controls the ionic conductivity through the electrode. The magnitude of the cerium concentration gradient depends exponentially on potential gradients. Eventually, the cerium site exchange reaches 100 %, starting from the back of the cathode, and creates an inactive, proton-starved zone, with high pH. As a result, these inactive zones cause an increase in transport and kinetic losses. Less surface area is available for the reaction to occur, which effectively lowers the roughness factor and increases the local oxygen transport resistance effect6. These losses are in addition to the proton transport, Ohmic and pH, losses. The performance impact due to electrode ionomer type (LSC vs SSC) is observed as a secondary effect only under very dry conditions. These results indicate that the total MEA conductivity must be sufficiently high to avoid cathode inactive zones with cerium. 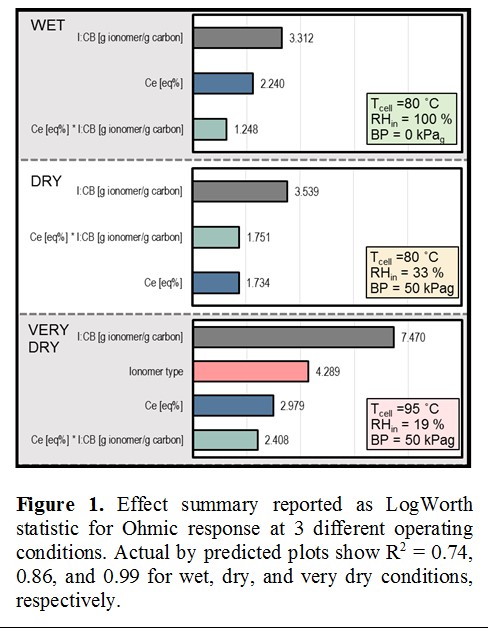