National Harbor 1 (Gaylord National Resort and Convention Center)
P. Choi, S. Frisco, and S. Litster (Carnegie Mellon University)
Lithium dendrite formation inside lithium-ion batteries with graphite anodes and beyond-lithium-ion batteries with metal anodes has shown to dramatically limit cycle life, restrict windows of operating conditions, and can result in catastrophic failures. Numerous research efforts have been and are still being dedicated to characterizing dendritic electrodeposition in batteries, yet the phenomenon remains to be fully understood. Our work aims to characterize the nucleation and growth of dendrites in batteries via in-operando observation using nanoscale x-ray radiography and computed tomography (nano-CT). Figure 1 shows our results using an in-house micro-capillary cell to observe in-operando the galvanostatic electrodeposition of copper in a symmetrical aqueous copper cell. In this cell, the electrode is coated on a metal micro-wire current collector and is immersed in a liquid bath of electrolyte. Such in-operando experiments allow for simultaneous observation of structure and voltage response as shown in Figure 1f, from which structural evolution can be correlated to cell voltage. In practical applications, an important aspect of dendritic failure is the interaction of electroplated Li with the electrolyte separator. To evaluate these interactions, we have developed a novel planar micro-pouch cell with commercial separator materials for in-operando observation at up to 50 nm resolution. Compared to the micro-capillary cell, which was used to produce the results shown in Figure 1, the new micro-pouch cell offers increased control of the active material loading and capacity, increased flexibility in component material selection, and easier assembly. 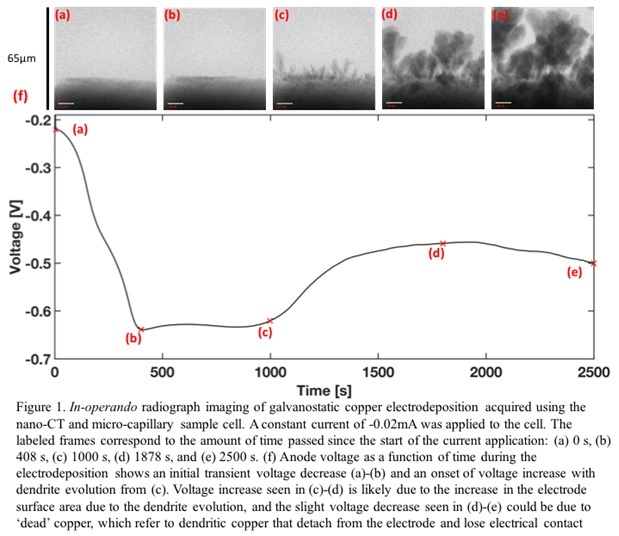