Prince George's Exhibit Hall D/E (Gaylord National Resort and Convention Center)
F. E. Hust, H. Witzenhausen, P. Shafiei Sabet (RWTH Aachen University - ISEA), A. Warnecke (Jülich Aachen Research Alliance, JARA-Energy), and D. U. Sauer (RWTH Aachen University - ISEA)
Modelling of batteries has become an important part in the design process of battery application. Especially for electric vehicles the design options can become very complex. To be able to make better design decisions, powerful modelling tools are necessary. However, one of the major drawbacks of complex models is the additional effort that is needed to parametrize the model [1, 2]. This work aims to simplify the parametrization of an impedance battery model, but keeping the parameters still physical and chemical meaningful.

The project openBat [3], funded by the German government, examines the effect of a massive parallelization on the failure rate of lithium-ion-battery-packs and creates a statistical lifetime model. To create a lifetime model, a decent understanding of the battery and modelling is needed. Exemplarily cells from a barely used Tesla Motors Model S are used and will be characterized over the lifetime. To get a starting point for the lifetime prediction, some cells were intensively investigated. The batteries were tested using electrochemical impedance spectroscopy (EIS) and time domain relaxation measurements (TDM). The EIS and TDM experiments have been performed on 5 temperature levels between -5 °C and 45 °C and under different states of charge. A physical-chemical modeling routine derived by H. Witzenhausen [4] was used to determine physical meaningful parameters. The parametrization routine was implemented in a graphical user interface [5] and is available under an open source MIT license. In this routine, the measured EIS data are processed with the so called distribution of relaxation times (DRT), which was formerly successful applied for fuel-cells [6] and later on for lithium-ion batteries [7]. The DRT is a transformation that allows calculating the relaxation time constants which are present in a system and thus can help reducing the parameters for a curve fitting. The determined time constants by the DRT are used to stabilize a non-linear equation fitting algorithm. The validation of the parameters is done firstly by implementing the parameters into an impedance based battery modelling framework [8] and comparing them to time domain measurements. This model implementation is freely available under GNU General Public License version 3. Secondly, a small number of specimens were opened for further analysis to verify the parameter set. The components, i.e. anode, cathode and separator were separated, samples of the electrodes were taken and analyzed for their chemical composition. Other samples were used for building coin cells, anode vs lithium and cathode vs lithium. These samples underwent several experiments. At first, the samples were checked for electrochemical stability by cycling with a very low current for three cycles and checking for voltage anomalies between each cycle. After creating stable samples, the open circuit voltage was measured. Furthermore, the relaxation behavior was analyzed and both were correlated with the full cell and therefore with the derived parameter set.

In this work the parametrization approach by H. Witzenhausen will be explained as well as the modelling. Furthermore the conducted experiments on the full cell and the half cells will be shown. Finally the validation of the parametrized model is presented. 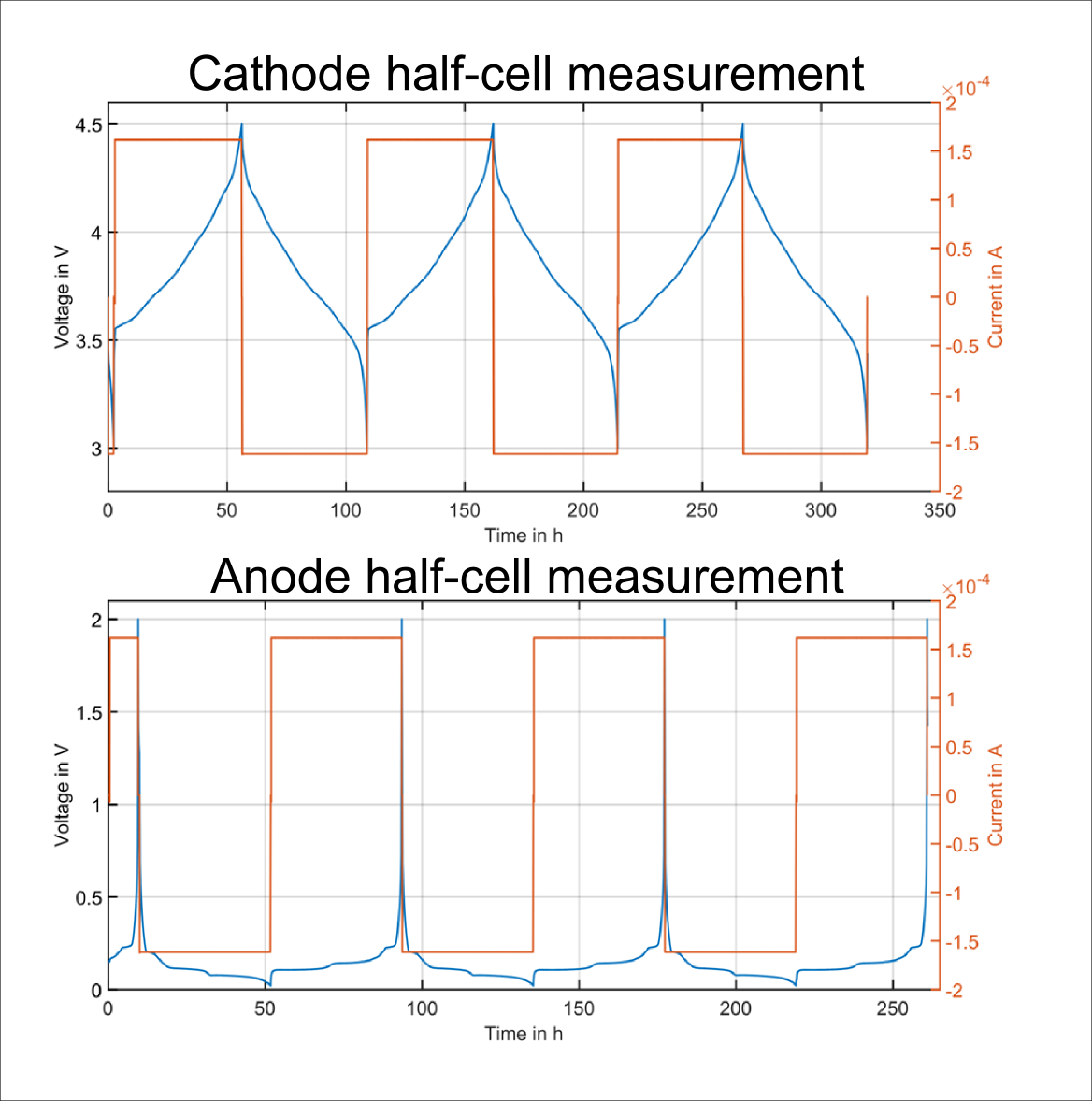