Maryland D (Gaylord National Resort and Convention Center)
N. Quill, D. Oboroceanu, D. N. Buckley (Physics Dept., Bernal Institute, University of Limerick, Bernal Institute, University of Limerick, Ireland), and R. P. Lynch (Department of Physics, University of Limerick, Ireland, Dept. of Chem. Eng., Case Western Reserve University)
Accurate knowledge of the physical properties of electrolytes is of great importance when designing, running or modelling flow battery systems. Typically, the vanadium concentration in vanadium flow battery (VFB) electrolytes is limited to about 1.6 mol dm-3. This is primarily due to the gradual precipitation of VV from VFB catholytes at high vanadium concentrations and state of charge (SoC). [1] Furthermore, overcharging the positive electrode of the battery results in undesirable oxidation (and resulting degradation) of the electrode. [2] Overcharging of the negative electrode leads to hydrogen evolution [3] which has a negative impact on the coulombic efficiency of the battery. All of these drawbacks of VFB technology can be mitigated/eliminated by proper control of the state of the battery electrolyte, i.e. by ensuring that the concentrations of overall vanadium, acid and particular vanadium species stay within safe limits for operation.

A number of techniques for determining the state of vanadium electrolytes have been proposed including absorbance measurements and conductivity measurements. [4-7] However, all techniques face a significant challenge, primarily due to the transport properties of the ionic membrane separating the two half-cells. Ideally, a proton exhange membrane would transport only H+ ions between the two half-cells and complete the electrochemical circuit. However, it is well known that significant amounts of both vanadium ions and water molecules will also be transported. This leads to a gradual change in the total vanadium and sulphate concentration in each half-cell. [8] Since both the solution absorbance and conductivity vary with vanadium and sulphate concentration, any technique based on determining a “calibration curve” that relates SoC to either conductivity [7] or absorbance [9] will become less and less accurate as the battery is cycled. 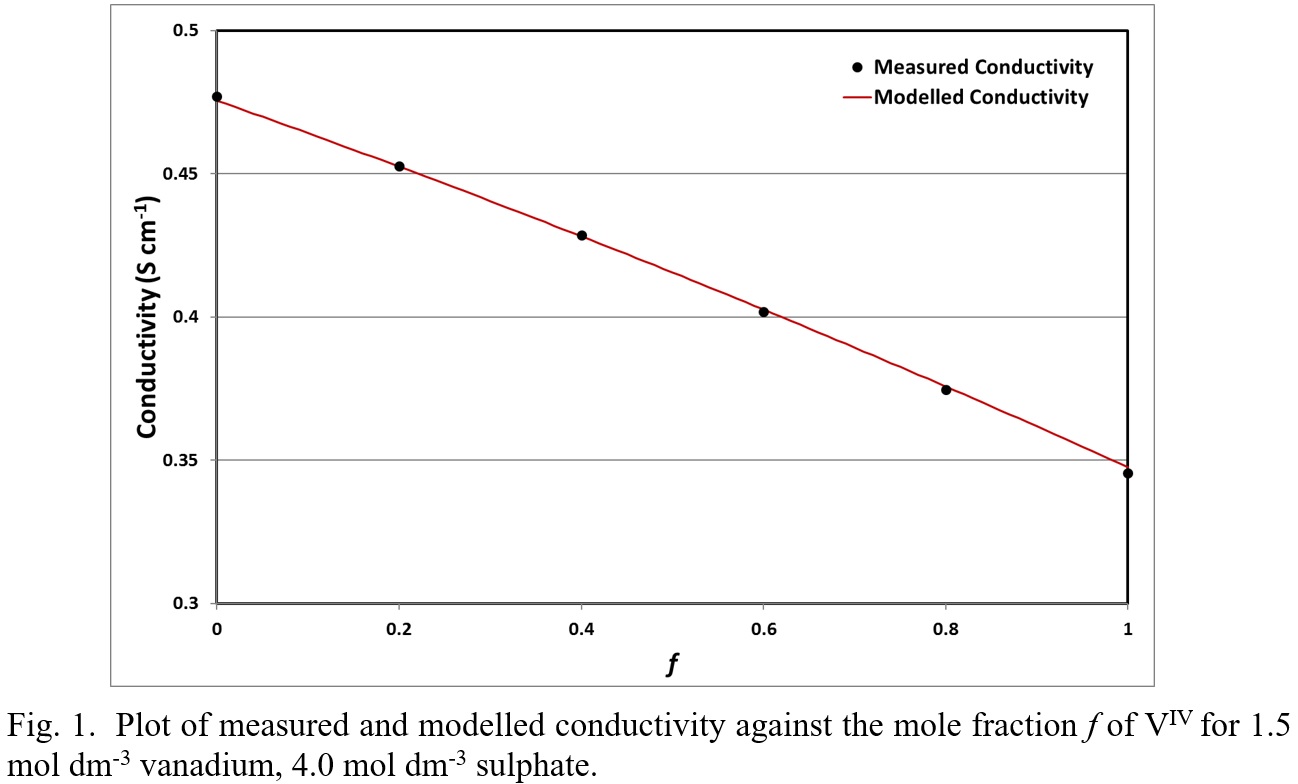