Maryland D (Gaylord National Resort and Convention Center)
D. Aaron, S. Yeom, Y. Ashraf Gandomi, T. Ertugrul, K. Kihm, and M. M. Mench (University of Tennessee)
Vanadium redox flow batteries (VRFBs) are a competitive technology for grid-scale energy storage due to numerous advantages over other electrical energy storage systems. Cost remains a limiting barrier, however, as VRFBs are currently slightly more expensive than Li-ion systems at grid scale. Much of the current research focused on VRFBs is intended to find electrode and membrane materials that are less expensive than those in current industrial use while yielding acceptable performance. An alternative avenue to reduced component cost for economic viability is system improvement to achieve greater power density while retaining 75 – 80% voltage efficiency. The added benefit of achieving efficient, high power is that such a system is better able to accommodate fluctuations in demand.

As losses in electrochemical systems can be broadly separated into kinetic, ohmic, and mass transport overpotentials, system improvement is accomplished by minimizing these overpotentials. This work demonstrates the mitigation of kinetic losses in conventional carbon felt electrodes or carbon paper electrodes by in-situ addition of high specific surface area carbon nanoparticles. This is in contrast with commonly-reported electrode pretreatments intended to alter the chemical composition and electrochemical activity of highly graphitized carbon electrodes, an approach that frequently suffers from poor electrochemical durability. It will be shown that some efforts to perform passive electrode modification on carbon felt led to negative impacts on mass transport in the porous carbon felt, thus there is opportunity to balance kinetic enhancement with mass transport resistance in VRFBs. Additionally, similar kinetic enhancement with detrimental mass transport impacts was observed when a thick film of reduced graphene oxide (rGO) was deposited on carbon paper electrodes. Kinetic enhancement for both carbon electrode materials is shown via alternating charging and discharging polarization curves to characterize VRFB performance at a representative state of charge, electrochemical impedance spectroscopy, and is supported by materials characterization of pre- and post-treatment electrodes. The addition of carbon nanoparticles was accomplished in-situ, thus this method is not limited to pretreatment of electrodes, but can be a low-cost retrofit to existing systems.

This work illustrates a favorable avenue to improve the performance of a VRFB with little disruption to operation. These insights and approach can be adapted to other efforts to reduce the cost of these grid-scale energy storage systems.

In the figure, scanning electron micrographs show (a) smooth carbon felt before addition of reduced graphene oxide (rGO) flakes and (b) rougher fibers after passive deposition of rGO flakes. Alternating polarization curves in (c) were accomplished at 50% state of charge throughout, indicating a three-fold improvement in current density at 80% voltage efficiency. 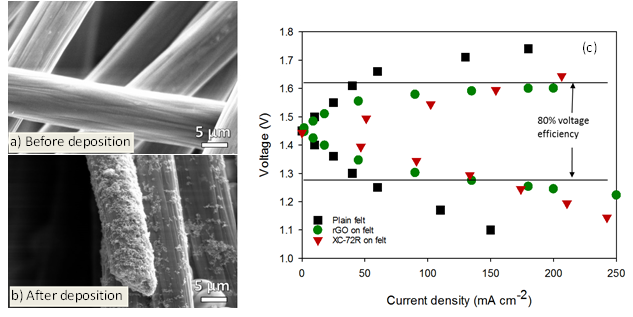