Figure shows the electrolysis voltage and HFR (high frequency resistance, 1 kHz) to the change of temperature. The HFR approximately corresponds to proton resistance through PEM. The electrolysis voltage begins to abruptly decrease just over 100°C, and turns to increase at 105°C, showing a valley on the temperature-voltage characteristics. Each slope on the characteristic (dV/dT) near 80°C and 120°C closes to temperature dependence of water-electrolysis Gibbs free energy change (ΔG(T)) in the case of liquid and gas, respectively. 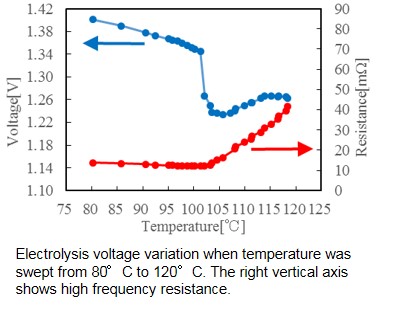