Manganese and its alloys are of significant interest for a variety of applications from corrosion resistance to thin films with useful semiconducting and magnetic properties. Manganese alloys have been demonstrated to have high Seebeck coefficients suitable for use as thermoelectric materials, have antiferromagnetic properties, and can be used to form dilute magnetic semiconductors.[1-3] Electrodeposition provides an attractive method to grow uniform thin films of these materials, however manganese is difficult to deposit in high quality from aqueous solutions due to the simultaneous hydrogen evolution reaction.[4] Despite the growing amount of literature on the electrodeposition of manganese alloys and compounds from various ionic liquids,[5-6]there is little known on the deposition of metallic manganese films, which is paramount to properly designing processes for alloy or compound deposition. This work aims to provide an in-depth study of the deposition of metallic manganese from an ionic liquid consisting of a 1:2 ratio of choline chloride and urea (ChCl-urea), a solvent that is seeing rapidly increasing use due to its low cost and good stability. The effect of glycine, which has been commonly used in aqueous systems, will also be studied in this ionic liquid media.

Initial cyclic voltammetry studies coupled with partial current measurements (figure 1) indicate an onset of cathodic manganese deposition at -1.17 V vs an Ag wire pseudo reference electrode. X-ray fluorescence (XRF) was used to measure deposit thicknesses in order to determine partial current densities of the manganese deposition reaction. The addition of glycine is observed to increase the side reaction that occurs prior to and during manganese deposition during cyclic voltammograms. It also inhibits manganese deposition, the onset of which is shifted to more negative potentials. The inhibiting effect of glycine is manifested as a reduction in the partial current of manganese deposition and an increase in the partial current of side reactions. Surface morphologies of deposits obtained at various current densities, with and without glycine, were studied using SEM and XRD. Results indicate that films grown with and without glycine exhibit similar morphologies, however feature sizes are larger in films grown from glycine containing baths, consistent with expectations for a slower growth process. In all cases, films were uniform and absent of significant cracking, indicating that this may be an attractive method for creating high quality thin films of manganese and its alloys, while avoiding the issues encountered with aqueous deposition baths.

Figure 1. Steady-state current-potential relationships for ChCl-urea containing 1 M MnCl2, with (red line) and without (green line) 0.2 M glycine, obtained on a Pt rotating electrode at 5 mV/s, as well as the partial currents of the manganese deposition reaction as measured by XRF. 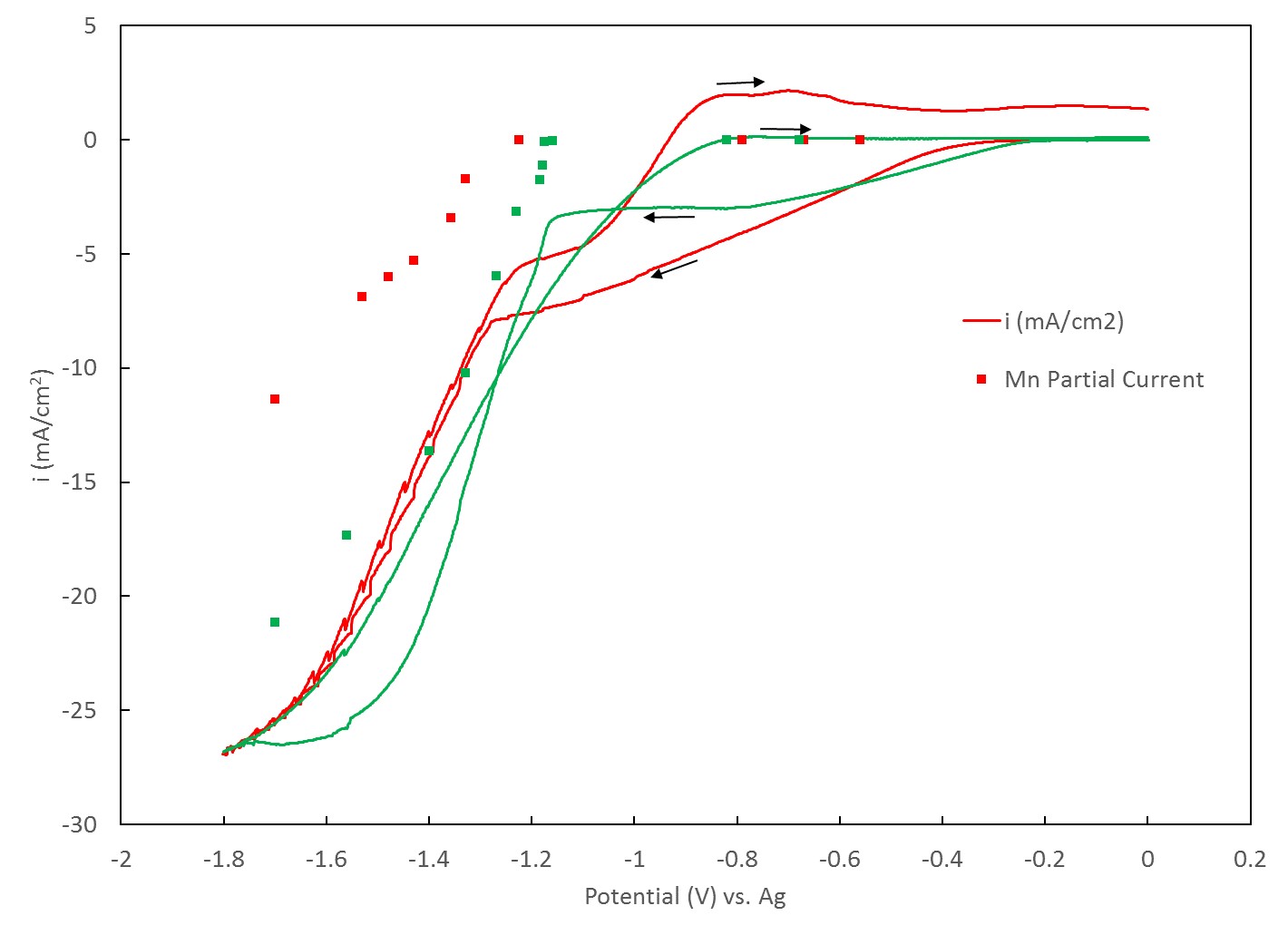