High permittivity (high-k) dielectrics such as HfO2, ZrO2, TiO2, La2O3 and Ta2O5 have been extensively researched to apply for gate oxide and MIM capacitors [1-5]. Especially, the use of laminates or mixtures of upper mentioned dielectric materials allows enhanced capacitance density and lowered leakage currents. Jõgi et al. revealed tetragonal ZrO2 become to be stabilized in Ta2O5-ZrO2 laminate system when the laminate thickness exceeded 50nm and allows higher charge storage factors [6]. For the continuing down-scaling of integrated circuit dimensions, however, it is difficult to use such thick layer as gate oxide or capacitor dielectric.

In this paper, thin ZrO2-Ta2O5 multi-laminate layers under 10nm were grown by atomic layer deposition (ALD) method and it was concisely discussed about the crystallization and metallic Ta reduction at the interface between ZrO2 and Ta2O5.

A 10nm-thick ZrO2-Ta2O5 multi-laminate layer was fabricated on TiN (20 nm)/SiO2 (100 nm)/Si by ALD method. The ZrO2-Ta2O5 multi-laminate layer consisted of 12 times laminate process of (6 ZrO2+2 Ta2O5). After the growth, rapid thermal process (RTP) was followed at 550 ºC during 120s. This sample was measured by high-resolution X-ray diffraction (XRD) and X-ray photoelectron spectroscopy (XPS) for the analysis of crystallization and chemical bonding status.

From the results of XRD analysis, thin ZrO2-Ta2O5 multi-laminate layer was well crystallized after the RTP anneal of 550 ºC, and stabilized tetragonal ZrO2 peak was clearly detected (not shown here).

A 10nm-thick ZrO2-Ta2O5 multi-laminate sample with RTP was analyzed by XPS measurements and it was clearly confirmed that there existed metallic Ta 4f7/2 peak as shown in Figure 1 (green). The samples of as-grown Ta2O5 layer (black), Ta2O5 layer with 550 ºC RTP anneal (red) and as-grown ZrO2-Ta2O5 layer (blue) were also analyzed for the reference. In case of the samples of as-grown Ta2O5 layer and Ta2O5 layer with 550 ºC RTP anneal, the metallic Ta 4f7/2 peak was not detected. On the other hand, metallic Ta was detected from the as-grown ZrO2-Ta2O5 multi-laminate sample. From these results, it is thought that the metallic Ta was reduced by the reaction with as-coming Zr source (and/or ZrO2), not by thermal decomposition.

Next, dependency of Gibbs free energy on the growth temperature for the reactions between Zr atom and Ta2O5 was shown in Figure 2. From the results, it was clearly known that the delta Gibbs energy had negative values in case of the reaction between Zr and Ta2O5, which means to prefer the reduction of Ta2O5 to metallic Ta when Zr source came after the deposition of Ta2O5. 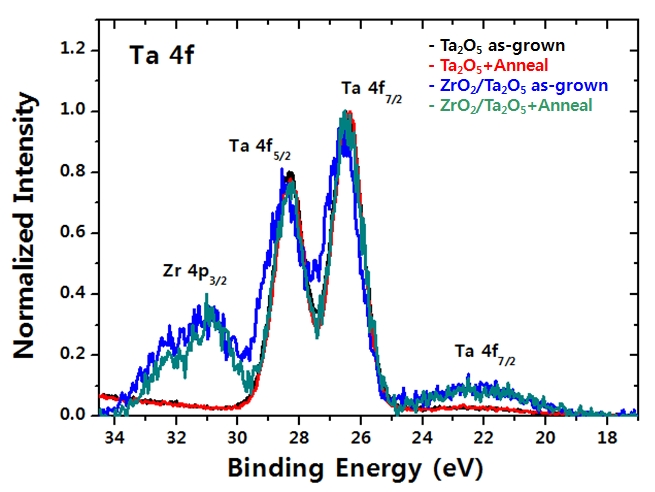