In the device fabrication, we used (110)-oriented SOI wafers, and the Si-fin channels were fabricated by using orientation dependent wet etching (6). To fabricate TG structure, the SiO2 fin hard-mask layer was removed by RIE. Then, a 4.3-nm-thick tunnel oxide was formed by thermal oxidation, followed by the deposition of a 10-nm-thick nitride (Si3N4) layer by LPCVD. As the blocking layer, a 10-nm-thick Al2O3 layer or a 9-nm-thick SiO2 layer was deposited on the different sample wafers. As the different gate materials, we used n+-poly-Si and PVD-TiN metal. Figure 1(a) shows the SEM image of the fabricated FinFET flash memory with a scaled gate length (Lg) of 26 nm. The cross-sectional STEM images of the fabricated n+-poly-Si gate SONOS, PVD-TiN metal gate MONOS and MANOS with a high-k Al2O3blocking layer are shown in Figs. 1(b), 1(c) and 1(d), respectively. It is clear that uniform and ultrathin Si-fin channels are successfully fabricated thanks to the orientation dependent wet etching.

At first, we measured the initial Id-Vg characteristics of the fabricated SONOS and MONOS type FinFET flash memories, and the threshold voltage (Vt) values were evaluated at a constant drain current of Id = 1 mA. It was experimentally found that almost the same sVt is obtained in the SONOS and MONOS devices. This result indicates that Vt variation is independent of gate material. Then, we measured P/E characteristics of the fabricated SONOS and MONOS devices. It was found that a larger memory window is obtained in the MONOS devices than the SONOS ones due to the higher work function of PVD-TiN gate than the n+-poly-Si gate as shown in Fig. 2. The higher gate work function is effective to the suppression of electron back tunneling during erase operation [7].

To investigate blocking layer material dependence on the electrical characteristics of the CT type FinFET flash memories, we fabricated MONOS and MANOS type devices with different blocking layers of SiO2 and Al2O3 as mentioned before. The initial Id-Vg characteristics of the fabricated MONOS and MANOS type FinFET flash memories with different Lg values from 26 to 103 nm were measured and the SCE immunity was systematically evaluated. It was found that the smaller Vt roll-off and the better subthreshold slope (S-slope) are observed in the MANOS devices as compared to the MONOS ones due to the high-k effect of Al2O3 in MANOS devices. The P/E characteristics of the fabricated MONOS and MANOS devices were also comparatively investigated. It was found that a significant memory window increment is obtained by introducing an Al2O3 blocking layer instead of the SiO2 one as shown in Fig. 3. This result is reasonable because a high-k Al2O3blocking layer is effective to enhance the electric field across the tunnel oxide layer and to reduce the electric field across itself. Therefore, electron back tunneling from the gate to nitride layer is effectively suppressed during erase operation. As a result, a deep erase and a large memory window are obtained in the MANOS devices than the MONOS ones. It was also confirmed that the fabricated MONOS and MANOS devices can operate over 100 k cycles, and can maintain a reasonable memory window after 10 years.

In summary, we have investigated the gate material and blocking layer material dependences on the electrical characteristics of the fabricated CT type FinFET flash memories. It was experimentally found that a high work function metal gate and a high-k blocking layer are very useful to the enhancement of memory window.

This work was supported in part by the Nanotechnology Project of NEDO, Japan. 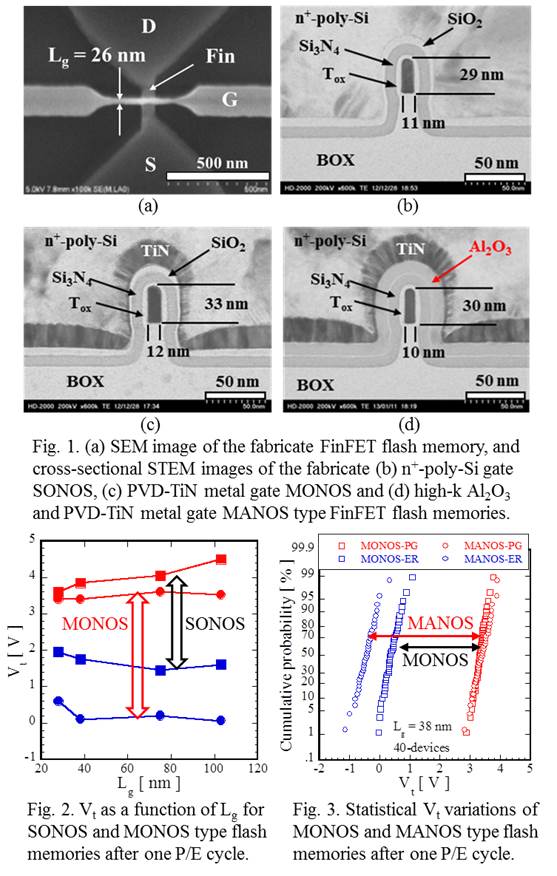