During these last 10 years Very Large Scale Integration techniques, well developed for transistors, have been used for the M/NEMS world (Micro/Nano Electro-Mechanical Systems). This allowed the construction of various kinds of miniaturized nano-sensors, especially resonators that can be used for gas sensing, mass spectrometry and molecules recognition for example [1,2]. Nevertheless, the use of such nano-sensors requires a CMOS electronic circuit for the readout part and for the oscillating-loop creation with the nano-resonator. The CMOS part can be on a separated die linked to the NEMS resonator using wire bonding connections (Fig.1-a).

However, in order to reduce signal transmission loss and allows the fabrication of a sensor with a high density of resonator, the best approach consists in processing both NEMS and CMOS on the same die (Fig.1-b and c) [3,4], in particular following a 3D scheme (Fig.1-c) [5,6]. The NEMS release process, commonly performed by a HF (Hydrogen Fluoride) vapor etching operation, is the final step of the integration. It implies the selection of two kinds of materials. The first one is a sacrificial layer in order to achieve a well-controlled and clean release of the mechanical structure. The second one is an etch stop layer located between the NEMS and CMOS for protecting all the area under the nano-resonator (Fig.2). In such 3D approach, etch stop and sacrificial layers can be deposited at high temperature before the molecular bonding of the mechanical part with the electronic part.

Two parameters are critical for the selection of those materials; the etch rate and the presence and dimensions of the residues (see Fig.3, 4, 5 and 6) which may result from a silicon-fluorine complex precipitation during the etching process [7]. These residues must not disturb the mechanical resonator during its oscillations.

This paper will present results about etch-rates and residual dimensions on HF vapor etching of materials used for the NEMS realization. It is shown in Fig.3 and Fig.6 that USG (Undoped Silicon Glass) and SiH4, usually used in back-end processes, are not suitable for the vapor HF release contrary to TEOS (tetraethyl-orthosilicate) Low Rate (LR) and boron-nitride (BN). Our study shows that the latter constitutes a good etch stop layer for HF vapor processing within a 3D integration scheme. 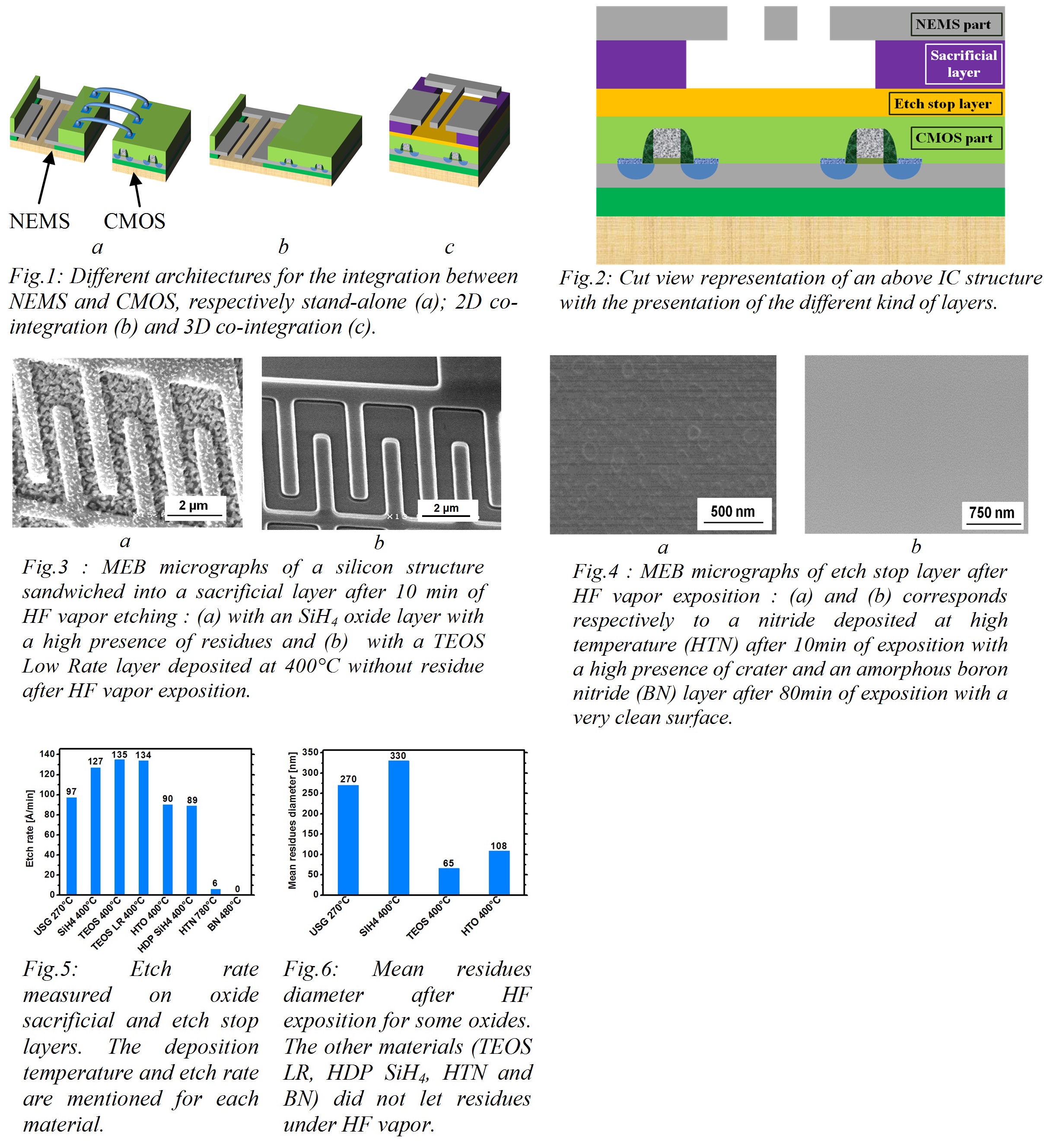