Taylor, Ground Level (Hilton Orlando Bonnet Creek)
M. Mibus, X. Hu, C. Knospe, M. L. Reed, and G. Zangari (University of Virginia)
Electrowetting-on-dielectric (EWOD) is a useful phenomenon in which the apparent contact angle of a conductive liquid upon a dielectric-coated electrode changes in response to an applied electric voltage. Large electrowetting effects can be achieved when the dielectric film has small thickness, large permittivity, and high breakdown field strength [1]. EWOD is the fundamental building block to numerous devices: displays, lens, and electronic paper [2]. The use of self-assembled monolayers (SAMs) has the potential to drastically reduce voltage requirements for contact angle change, when used in conjunction with a high breakdown field strength layer.

We studied self-assembled monolayers on anodic aluminum oxide. The monolayer films are formed using various solvents, immersion times, and formation temperatures. Characterization used contact angles and AFM to assess the quality of the films. Contact angles were studied in both a static and a dynamic configuration to assess the SAMs ability to serve as a hydrophobic layer for EWOD systems.

Static contact angles are measured optically through a Ramť-Hart goniometer system, allowing full electrowetting characterization, such as in Figure 1. The three regions shown are low voltage EWOD, which is modeled according to the Lippman – Young (LY) curve at low voltage: cos(θ)  = cos(θ0) + cV2/2γ; where c is capacitance, V is applied voltage, γ is the gas-liquid interface tension, and θ0is the equilibrium angle. This is followed by a saturation region, giving a limiting angle below which an increase in electric field has no effect. Finally, at high field the monolayer desorbs causing a large drop in wetting angle.

Dynamic contact angles describe three phase boundary motion giving “advancing” and “receding” contact angles, with their difference defining the contact angle hysteresis (CAH). The measurements are made using the Wihelmy plate method and a Krüss tensiometer; the technique consists in dipping the plate in the liquid electrolyte, measuring the force as a function of the immersion depth. CAH gives an insight into the homogeneity of the SAM films, since any discontinuity in the SAM may obstruct the drop movement; this is observed in the saturation region of Figure 1. Additionally, the raw force-depth data from the tensiometer system show how the contact angle changes across the sample and through repeated cycles, as shown in Figure 2. The deviation from a linear behavior during immersion and emersion (Figure 2) suggests the presence of inhomogeneities in the SAM; the lines in fact smooth out for SAMs formed at higher immersion time. 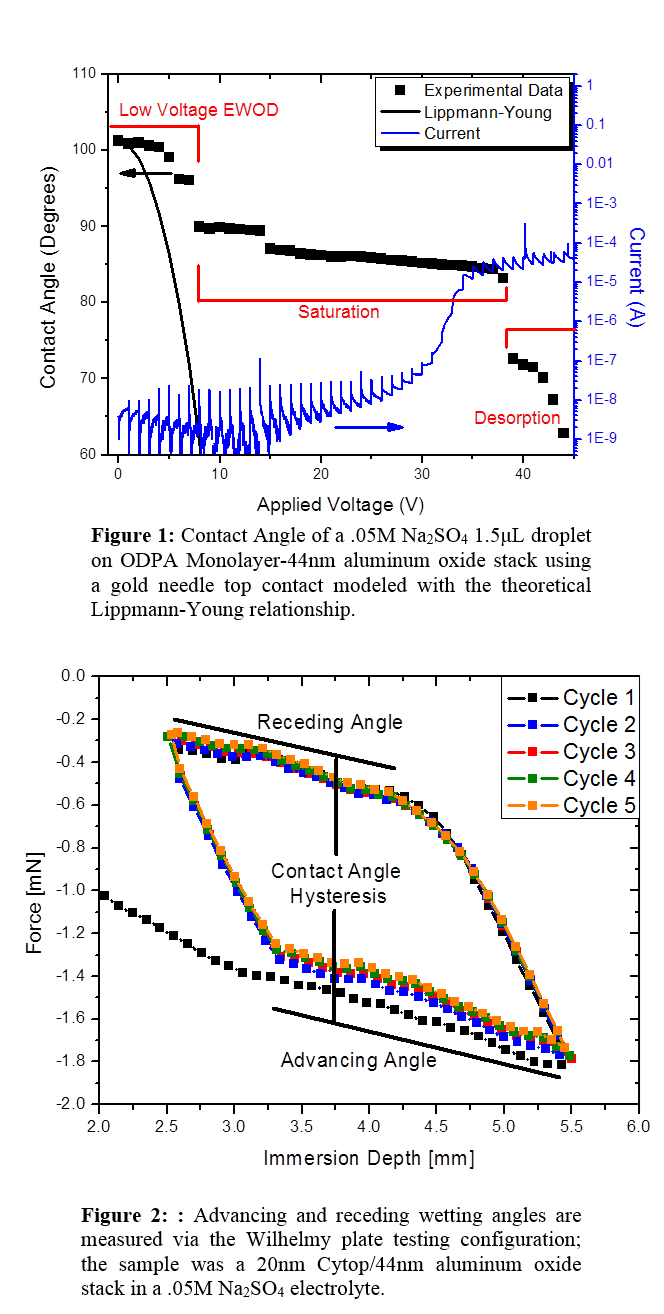