Characteristics of SiO2/4H-SiC MOS interface have been extensively investigated since the improvement of MOS channel mobility is crucial for the reduction of on-resistance of SiC power-MOSFETs. The recent drastic improvement of the crystal quality of SiC epitaxial layers has provided us an opportunity to improve the MOS characteristics by the control of oxidation processes. In this study we investigate the growth kinetics of thermal oxides on 4H-SiC in nanometer-thick region, to understand the guidelines to control the MOS characteristics.

We also found an offset by extrapolating the slope to y-axis in Fig. 1 (a), which clearly shows the existence of an abnormally fast growth limited in very early stage of the growth (< 2nm). We speculate that the sudden growth rate change will correspond to the change of energetic barrier of the interface reaction, probably the change of CO ejection pathways. One of the possible explanations for this transition would be the thickness dependent oxide microscopic structures in ultrathin region, which might affect the kinetics of oxygen penetration or CO ejection processes. Actually we have clarified by FTIR-ATR studies, that the microscopic structural deformation of the near-interface oxides due to the strain or substoichiometry is induced by the substrate only for < 2 nm region [5].

The C-V characteristics of the MOS capacitor with 13.5-nm-oxide grown by the combination of 1300°C oxidation and 800°C annealing in dry O2 are shown in Fig. 2. Thanks to the oxide grown at high-temperature in the interface-reaction-limited mode, significantly improved MOS characteristics where Dit was estimated to be 2~4×1011 cm-2eV-1for 0.2~0.4 eV below conduction band, was attained only by dry oxidation process without any passivation processes.

A linear regime of thermal oxidation of 4H-SiC (0001) was clearly observed for nanometer-thick region. High-temperature dry oxidation with interface-reaction-limited mode should be beneficial to improve the MOS characteristics. 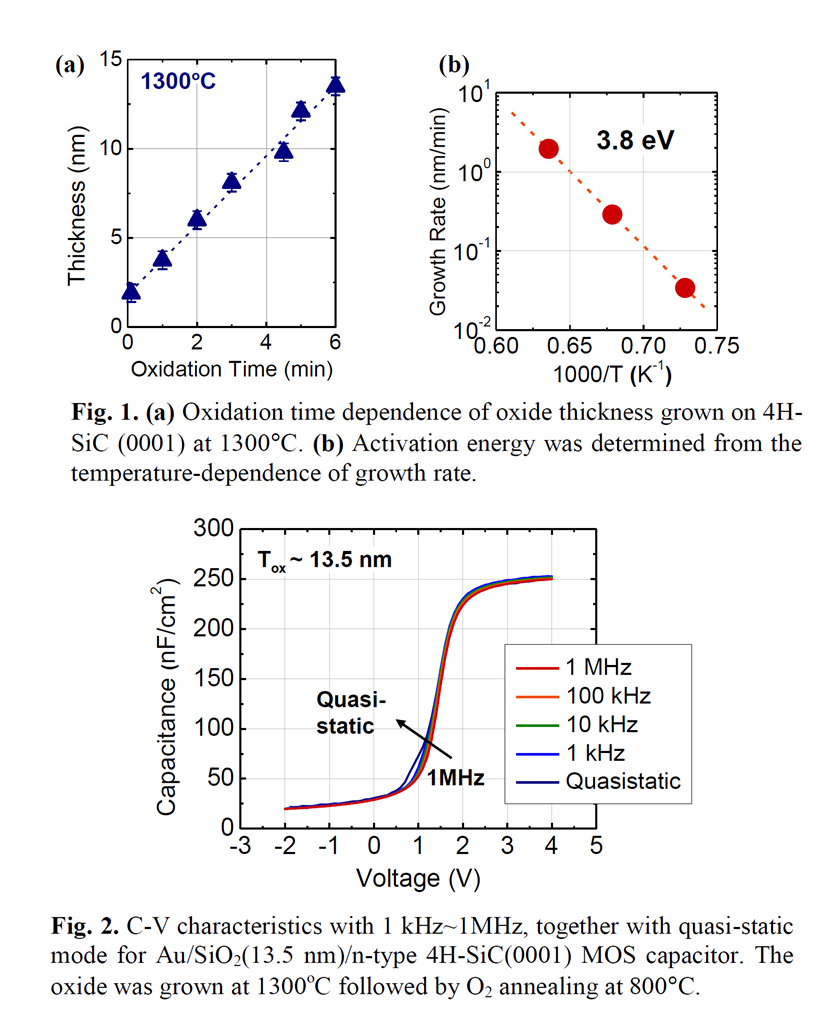