Expo Center, 1st Floor, Universal 7 (Moon Palace Resort)
T. Leoni (Aix Marseille Université), R. Bernard (Institut des Nanosciences de Paris), A. Ranguis (Aix Marseille Université), Y. Borensztein, G. Prévot (Institut des Nanosciences de Paris), and L. Masson (Aix Marseille Université)
The large interest in graphene layers and their applications has motivated scientists to investigate other group-IV two-dimensional (2D) layers that could be graphene's analogous, i.e. with honeycomb structure and sp2 bonding. Among these, silicene, a single sheet of silicon, has attracted much attention in the last past five years with respect to fundamental interest and potential use in electronics. Pioneering works concern the Si/Ag system and it has been shown that 2D epitaxial layers can be grown on Ag(110) [1] and Ag(111) [2]. A graphene-like signature in photoemission spectra has been reported on such films, attributed to the formation of silicene with sp2-sp3hybridized Si atoms arranged in a two-dimensional honeycomb lattice [2-3]. However, recent experimental and theoretical studies have shown that these conclusions have to be reconsidered and challenge the current understanding of the Si growth on silver substrates, interpreted within the framework of silicene models.

After an introduction devoted to a review of the results obtained on the Si/Ag system, I will focus, in a first part, on our recent results concerning ultrathin Si films grown on the anisotropic Ag(110) surface. Upon submonolayer condensation of Si at room temperature (RT), long, parallel and thin lying Si single nanoribbons develop spontaneously (see Figure 1a). At 460 K, these nanoribbons self-assemble to form a one-dimensional (1D) array of double nanoribbons with a pitch of ~ 2 nm (see Figure 1b) . At completion, this 1D grating covers uniformly the entire substrate with a remarkably high degree of structural order. By following in situthe Si growth on Ag(110) with STM and grazing incidence X-ray diffraction using synchrotron radiation, we provide compelling evidence that nanoribbon growth induces a surface reconstruction associated with the release of Ag atoms [4]. Our results are in agreement with an unexpected effect, a missing row reconstruction of the Ag layer underneath the Si nanoribbons. Our findings call for a reconsideration of the proposed honeycomb structure of the Si nanoribbons based on a non-reconstructed substrate.

In a second part, I will focus on the Si/Ag(110) system used as a novel Si template for the growth of 1D nanostructures. Recent works have shown that Si nanoribbons grown on Ag(110) can be used for the growth of identical 1D nanostructures such as Co nanolines [5], Mn nanolines [6] and C60chains [7]. Under Co adsorption in the temperature range 220 K-300 K, the thermally activated process of Co incorporation into the Si matrix is partially hindered. Co atoms are adsorbed on top of the Si nanoribbons and give rise to the growth of identical Co nanostructures with a high lateral order. These nanolines are composed of Co dimers oriented perpendicularly to the axis of nanolines. Processes involved in the Co nanostructure growth at the atomic scale have been studied by high-resolution STM. Interestingly, the Co nanoline growth proceeds in a nearly layer-by-layer growth, reproducing the 1D pattern of the Si template up to five monolayers. Recent results concerning the magnetic properties of the Co nanostructures studied with X-ray magnetic circular dichroism will also be presented. 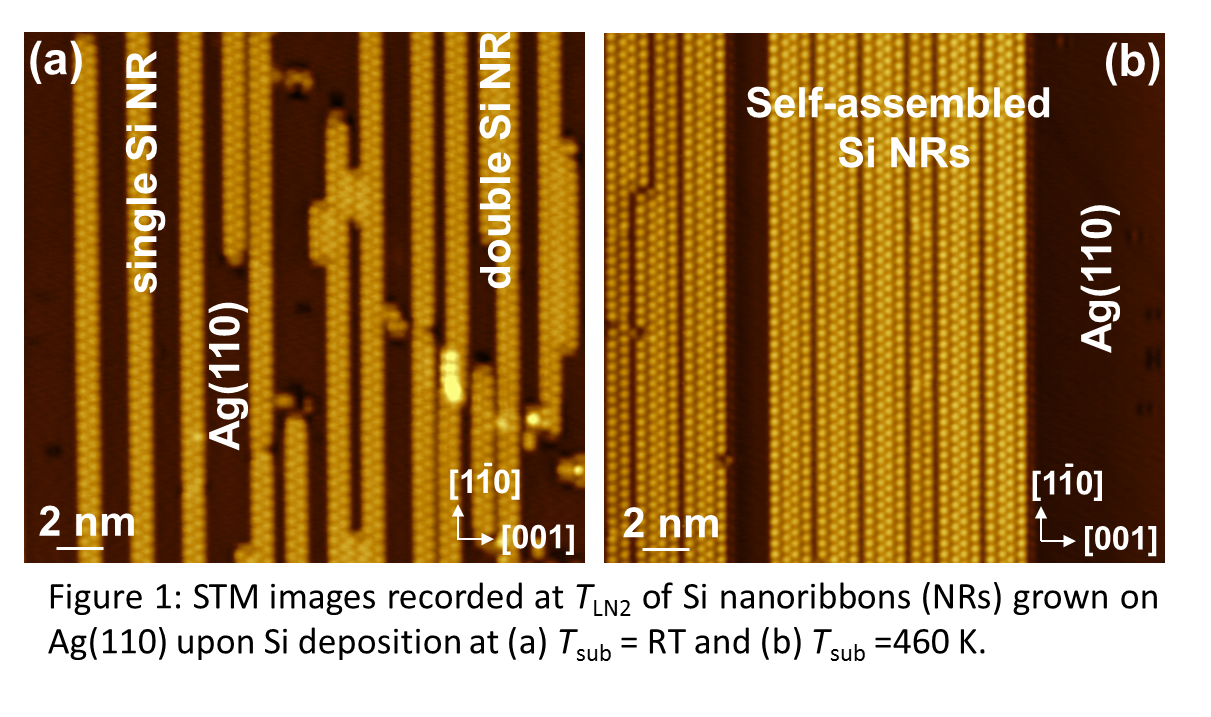